A team of researchers has found what may once have been the most liveable mud on Mars.

Some of the oldest minerals ever analysed by NASA’s Mars Opportunity Rover show that around four billion years ago Mars had liquid water so fresh it could have supported life.

The findings were announced in a special ‘Exploring Mars Habitability’ edition of the journal Science released today to coincide with the 10th anniversary of the Mars Opportunity Rover and its twin, Spirit, landing on the red planet.

CSIRO’s Dr Paulo de Souza, who is on the science team led by Cornell University’s Professor Steven Squyres, said a major focus on NASA’s decade of research on Mars surface was whether the planet may ever have been habitable.

“While Mars is too cold now to have the liquid water needed for life, we’ve had evidence for past water activity on the planet from satellite images of valleys and analysis of rocks by the Rovers,” Dr de Souza said.

“If there was ever life on Mars, then this would have been the mud for it to live in.”

“But the water that once shaped those landscapes and minerals was as acidic as vinegar.

“Our latest research has found not only the earliest episode of water activity documented yet by the Opportunity Rover, but that the geochemistry of the 4 billion year old rocks indicates extensive deposits of past water that’s among the freshest, most life-sustaining found so far anywhere on Mars.

“If there was ever life on Mars, then this would have been the mud for it to live in.”

Dr de Souza is a Science Leader at CSIRO in micro-sensors and has worked with NASA since the Mars Exploration Rover Program began, having collaborated with NASA’s research teams for many years.

“She’s a brave little Rover and she’s way past warranty,” he said.

“Opportunity’s Mars mission was expected to last just months but she’s still going strong 10 years on with no signs of stopping.  She’s travelled 38km instead of the few hundred metres planned.

“Along the way, Oppy’s collected invaluable information about Mars’ surface with her high tech toolkit of rock scrapers, chemical sensors, and spectral analysers.”

Oppy’s been beaming a decade’s worth of data back to space receiving stations on Earth, including the Canberra Deep Space Communication Centre outside Canberra at Tidbinbilla managed by CSIRO.

“Thanks to the Rovers, we now have a much richer knowledge of our nearest planet and where to focus our future search for microfossils, present water and other signs of life,” Dr de Souza said.

Dr de Souza is giving three public lectures on 23-24 January at CSIRO Discovery in Canberra to celebrate the 10th Anniversary of the NASA Mars Exploration Rover Program. The lectures are suitable for all ages.

Media are also invited to interview Dr de Souza at CSIRO Discovery at 10am Friday 24 January and enjoy some Mars Rover birthday cake.

Me and my Rover. Paulo de Souza with a model of the Mars Rover, Opportunity.

Opportunity’s view (in false-colour) of ancient mudstones on a rocky outcrop on the rim of Endeavour Crater. (Image: NASA/JPL/Cornell/ASU) 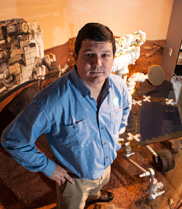