In 1971 Graeme Pearman joined the CSIRO Division of Meteorological Physics and established one of the first ‘atmospheric chemistry’ research groups in the world. It was primarily directed at the ozone depletion issue and the global carbon budget ‘ the chemistry that potentially interfaces with the climate of the earth.

He played a seminal role in the design and establishment of the Cape Grim Baseline Air Pollution Station in Tasmania which commenced operations in 1976 and is considered to be the finest such observatory in the world, helping define changes in the composition of the atmosphere, particularly with respect to climatically active species (greenhouse gases, aerosols), and in fundamental research on the global biogeochemical cycling of compounds.

The figure below represents the observations initiated by Graeme Pearman and colleagues and maintained over the years by a number of CSIRO Marine and Atmospheric Research (MAR) staff with the support of their Bureau of Meteorology colleagues. 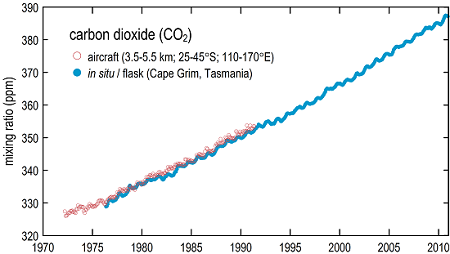 Graph of Australian CO2 data based on the CSIRO aircraft sampling program and the measurements at Cape Grim. [Source: CSIRO MAR]

In 1985 he commenced a program of public communication on greenhouse and its potential consequences. This led to his being awarded a UN Global 500 Award in recognition of the fact that, at the time, the Australian public were as well informed about the issue as any community in the world. Since leaving CSIRO in 2004, Graeme Pearman’s interests moved to energy futures, the psychology of human behaviour in relation to climate change, the role of science in modern societies and particularly how holistic and strategic policies to underpin a resilient future can be developed from what is often disciplinary-based scientific knowledge.