Dr Robin Hill is internationally acclaimed for his outstanding research on the geological factors responsible for the formation of magmatic nickel-copper sulphide ore-deposits and the development of successful exploration strategies for these deposits. The research emphasised the need to consider the physical volcanology of the host ultramafic rocks when planning strategies for exploration.

These fundamental field and laboratory-based research programs, undertaken in close collaboration with exploration companies over several decades, has rectified earlier errors and confusion which had led to extensive geological terrain being ignored or ineffectively explored.

Dr Hill is one of a select few who have significantly changed exploration strategies and introduced new exploration paradigms to the minerals industry in Australia and overseas. Industry representatives have estimated that throughout the 1980s-1990s Hill’s research outcomes delivered to the Australian economy more than $6 billion, a return on investment of over 1 000:1. 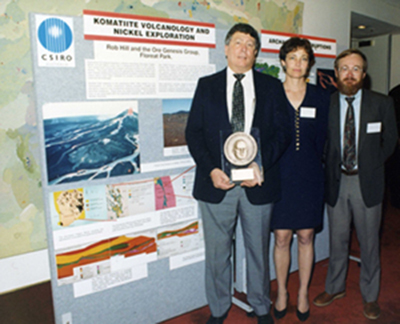 Nickel deposits in the Archaean Block (rocks older than 2.4 billion years) of Western Australia and other similar geological terrains throughout the world, are hosted by highly-magnesian (ultramafic) lavas called komatiites. Dr Hill’s strategic research was aimed at studying in detail the various characteristics of komatiite eruptions to understand the early volcanic history of Western Australia and to build up a picture of where nickel sulphide deposits are likely to have formed. Central to Hill’s research success, has been the integration of detailed studies of the ancient komatiites and their contained ore-deposits, with an understanding of basalt lava-flow emplacement mechanisms in modern and active eruptive environments.

In the early 1990s, 20 years of research culminated in a new interpretation of the physical volcanology of the komatiite host rocks involving recognition of various volcanic environments such as lava conduits or regional lava channels, lava lakes, lava levees, lava over-bank flows or breakouts, and lava sheet-flows which were integral components of vast complex komatiite flow-fields. The research highlighted preferred lava pathways or feeder conduits within the volcanic architecture, as the loci of formation of the nickel sulphide accumulations. A new classification scheme for these deposits was devised based on volcanic environment and the process of nickel sulphide formation.

This outstanding work provided new exploration concepts for nickel deposits worldwide. Of particular significance was the new interpretation for the origin of the large low-grade world-class deposits in Western Australia such as Mt Keith, Six-Mile Well, Honeymoon Well and Perseverance. Recognition that these are integral components of volcanic extrusive systems, rather than intrusive bodies, had profound implications for both stratigraphic interpretation and for nickel exploration.

Dr Hill’s interpretive model for the eruption and emplacement of vast Archaean komatiite flow-fields involves the prolonged passage of hot lava through thermally insulated lava tubes or conduits, which act as feeders to advancing lava flows. A komatiites facies analysis scheme, based on an interpretation of lava crystallisation textures and cooling environments within the flow fields, is reflected in rock textures, mineralogy and chemical composition. This enabled the detailed reconstruction and interpretation of the volcanic evolution of often sparsely outcropping komatiite stratigraphy and provided a basis for identifying prospective komatiite facies for nickel exploration. 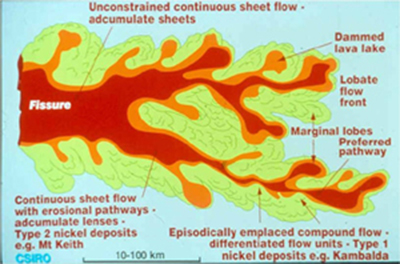 An early version of the schematic representation of komatiite flow-field facies and the volcanological setting of massive (Type 1) and disseminated (Type 2) nickel sulphide ore-bodies. This model was subsequently revised by Dr Hill using his research on active Hawaiian lava tube analogues. [Source: CSIRO]

Research by Dr Hill’s research team, on the Australian komatiite-associated ore deposits and their host rocks identified a continuum of proven and possible ore-bearing environments, which can be confidently placed into Hill’s flow-field model. The research confirmed that the ore deposits formed in the insulated lava conduits during prolonged flow of lava which fed advancing flows. Dense immiscible sulphide liquids formed in the flowing lava during crystallisation, and when the lava heated, melted, eroded and assimilated the sulphidic floor rocks of these conduits, these sulphide liquids eventually accumulated within trap-sites in the giant plumbing systems. Lithological, physical, and chemical signatures of these ore bodies, their host contaminated lavas, and the lava-tubes themselves have been used successfully in the search for nickel sulphide ore bodies.

The Group’s exploration models continue to be applied by the mineral exploration industry. New deposits are now being found and effectively beneficiated. In addition there has been outstanding success in greenfields exploration and brownfields exploration as a result of application of the Group’s research results. One significant example is the discovery, in 1989, of Sarah’s Find by research team member Sarah Dowling. This was achieved by directly applying research outcomes, in collaboration with Australian Consolidated Minerals, in an area that had been subjected to over 20 years of continuous exploration for nickel sulphides. Another example was the discovery of the Silver Swan Camp of nickel-sulphide orebodies in Western Australia in 1995, where the success is directly attributed by industry to the CSIRO Model. 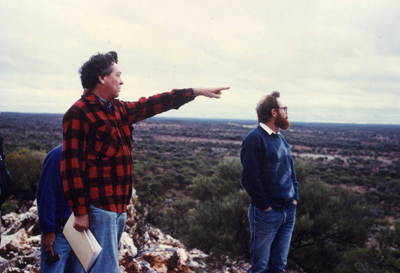 Dr Robin Hill pointing out regional geological features in the North-Eastern Goldfields region of WA; during a CSIRO-run komatiite field excursion for exploration and mining geologists, with Dr Martin Gole standing in the background. [Photo: CSIRO]

Technological transfer and marketing industry-wide were achieved through annual field workshops and excursions to selected research sites in WA, through continued close contact with industry peers, through regular project-focused reports, through publication of research results in peer-reviewed literature and participation in scientific and industry conferences. Two of these publications (Dowling & Hill, 1992 ; Gole et al., 1989) received major Australian and international awards for excellence.

In 1993, pursuing the adage that ‘the present is the key to the past’, Dr Hill undertook a four month sabbatical term with the USGS Hawaiian Volcano Observatory in Hawaii to study recent and active basalt flow emplacement mechanisms.

In 1995, to extend a globalisation strategy of the Australian minerals industry, Dr Hill was seconded to Outokumpu Metals and Resources in Finland to consult on the development of the Company’s nickel exploration strategy for Finland and Russia.

Dr Hill and his team are one of a select few who have significantly changed exploration strategies and introduced new exploration paradigms to the minerals industry in Australia and overseas. Industry representatives have estimated that throughout the 1980s-90s Hill’s research outcomes delivered to the Australian economy more than $6 billion, a return on investment of over 1 000:1. Typical comments from industry are as follows:

Dr Hill and his team’s research has made a contribution to the discovery of a resource of about 25 million tonnes of 0.8wt% nickel and has indicated the potential for new deposits to be located 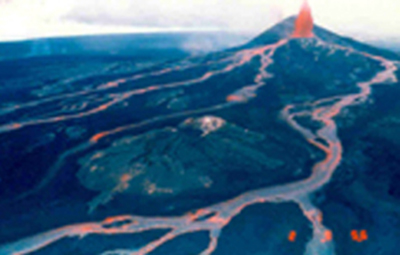 Dr Hill believes that it was very important that his successful, small, research team was multi-disciplinary and problem-focused; with expertise in geology, geochemistry, volcanology, igneous and metamorphic petrology, geophysics, fluid dynamics, phase-equilibria and magnetic modeling.

Another significant and unique feature underlying the achievement of the group in such a competitive industrial environment, was the manner in which the research program was structured around carefully chosen, confidential, one-on-one collaborative research projects with sponsor companies. This approach delivered continuous immediate tactical benefits to the sponsor companies’ exploration programs, and provided answers to the overall conceptual jigsaw puzzle, when project synthesis was focused on the broader longer term strategic benefits to the industry overall.

Dr Robin Hill and his research group at the Division of Exploration and Mining received a CSIRO Medal for Scientific Achievement in 1991 and the Sir Ian McLennan Science for Industry Award in 1992.