Although the exact origin of common prickly-pear in Australia is not known, it was introduced by early settlers and spread for use as hedges and as pot plants.

In the absence of predators and disease, by the mid-1920s it took over 24 million hectares (60 million acres) of farming and grazing country.

In 1926, larvae from the Argentinian moth Cactoblastis cactorum were released and within 10 years, the once-dense fields of common prickly pear lay rotting or had vanished completely. 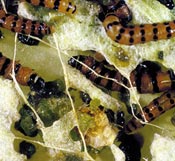