Martin Prins was born on 24 December 1949 in Holland and migrated with his family to Australia in 1954. They settled in the Geelong region where his father was Plant Manager at the Geelong Shell Refinery. His primary schooling was at Norlane (1956-59) and Barwon Heads (1960-61) and his secondary schooling at Queenscliff High School (1962-67).

Martin credits the Why Is It So? series with Prof Julius Sumner Miller for sparking his interest in science. This interest was further encouraged by, at different times, a couple of enthusiastic science teachers in secondary school who had the knack of keeping a group of troublesome teenage boys interested in science.

He was awarded a BSc degree from Deakin University in 1993.

Martin joined CSIRO Division of Textile Industry in February 1968 and was active in CSIRO’s research for the textile, clothing and footwear industries for more than 40 years, retiring in February 2009. His first role (1968-70) was as a Technical Specialist, developing extensive knowledge of textile testing procedures and standards. In addition, he was involved in the Self-Twist commercialisation program.

Other research interests during his time at CSIRO, have included:

In the Sirospun® program in the 1980s, Martin was involved in its commercialisation, investigating and resolving problems encountered by industry. To trouble-shoot yarn fault problems he co-developed the Yarn Fault Analyser, an instrument which measured faults to a high level of sensitivity, leading to a greater understanding of weak spots and yarn behaviour during weaving. Later, this work led to the commercial development of the Siroclear and Solospun technologies.

The Siroclear® detector technology enables the identification and removal of vegetable matter and coloured contaminants and weak spots in undyed yarns during winding at high speed, saving the industry millions of dollars per annum. By detecting contaminants in yarns, fabric repair costs are reduced by up to 90%. Martin was a co-inventor of Siroclear which was licensed to the Swiss Company Loepfe after successful commercialisation trials were conducted by Martin in Italy and Germany. It is now the international benchmark in yarn clearing technology.

As the principal inventor, Martin took a major role in the development and commercialisation of Solospun®, a simple and inexpensive attachment to conventional spinning machinery, which produces robust, single-ply worsted yarns that withstand the stresses of weaving. Solospun® was a joint development by CSIRO, The Woolmark Company and WRONZ. In 1998, Martin was seconded to The Woolmark Company based in the Ichinomiya office in Japan. During this period, Martin was responsible for promoting the Solospun technology in Japan and China, liaising between CSIRO, The Woolmark Company and Japanese textile mills, conducting a range of processing trials at mills such as Nikke, Toabo, Toyobo, Kurabo and Kanebo.

From 1999 to 2003, he was manager of the CSIRO textile processing mill, which included scouring, topmaking, spinning, weaving and knitting as well as a newly established cotton processing facility. He also had responsibility for scoping process related projects for CSIRO.

Towards the end of his career Martin was a Stream leader in CSIRO’s Protein Fibre Processing and Technologies research theme. This research developed new environmentally friendly technologies for wool and other protein fibres to expand their marketability. Projects explored the role of fibre properties in processing and product performance, processing efficiencies and the development of high-performance fabrics for sports, casual and urban-wear. They included the Cool Merino project which enabled a cool touch to be imparted to summer weight wool woven and knitted fabrics; the New Wool Micro-Fibre Blends project which developed technology to efficiently blend wool with acrylic and polyester fibres; and the Lightweight Fluid fabrics project which developed a platform Lite Twist yarn technology for knitted and woven fabrics. The principal end user for these projects was Australian Wool Innovation.

CSIRO’s textile processing and research facilities provide practical hands-on training opportunities for a broad range of courses. Martin brought his broad expertise in commercialisation of products in cotton and wool to CSIRO training programs and was one of the expert presenters in such courses as:

Martin has been actively involved with CSIRO in working with the Australian Wool Textiles Training Centre (AWTTC) program to offer wool-industry training in Australia. This program was designed to advance knowledge and skills in processing Australian wool worldwide. 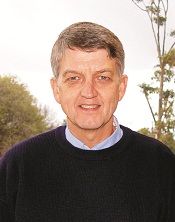