Skeleton weed Chondrilla juncea, is a herbaceous perennial of Eurasian origin, first recorded in Australia in 1917. It spread throughout the south-eastern Australian wheat belt during the 1920s to 1940s, where it dramatically reduced yields, increased production costs and proved difficult to control. By the 1950s it was considered Australia’s worst weed. In 1966 CSIRO, with funding from the Wheat Industry Research Council, established the CSIRO Biological Control Unit (now the CSIRO European Laboratory) under the leadership of Dr Tony Wapshere. There he initiated the world’s first ever ground breaking, native-invasive range, comparative weed ecology research project. This program ran from late 1966 for more than 30 years with the bulk of the program finished by 1985.

The initial tasks were to conduct an ecological study of skeleton weed in Europe and to search for potential biological control agents. Detailed studies in Mediterranean Europe eastwards to Iran examined the impact of natural enemies as part of the weed’s overall ecology and examined nine control organisms in some detail. Two of these were discarded as insufficiently host specific, three more because of unresolved issues over specificity and four were introduced, three of which established widely. Of these, the rust fungus Puccinia chondrillina, was extremely successful, dramatically reducing the density of skeleton weed over a few years. The eriophyid mite Eriophyes chondrillae and the gall midge Cystiphora schmidti also established widely and assisted in weakening the plant. The economic benefit of this program has been calculated as $1.426 Billon in 2004-5 dollars with a benefit:cost ratio of 112:1. CSIRO’s skeleton weed program remains the most beneficial biological control of a weed ever implemented in Australia.

Skeleton weed Chondrilla juncea is a herbaceous perennial of Eurasian origin with an extremely long taproot / vertical rhizome (up to 4 m deep in light soil). Each taproot has one or more annual top growths commencing as rosettes in autumn which produce vertical branched stems up to 1 m tall, with many knoblike flower heads (capitula) in spring/summer (Figures 1 & 2). These die back in late summer and new rosette growth regenerates from the rootstock. Chondrilla  juncea is an obligate apomict, pollination not being required to produce viable seed and occurs as a number of genetically distinct forms, three of which occur in Australia. These are designated forms A, B and C and are commonly referred to as the narrow, intermediate and broad leaf forms. Form A, the narrow leaf form, is the most widespread and common form and has been the main problem in Australia.

It was first recorded near Wagga Wagga, NSW in 1917, probably imported accidentally as a contaminant of grapevine rootstock, and spread rapidly through the NSW cereal belt in the 1920s and 30s. It continued to spread into Victoria and South Australia, with a small infestation occurring in southern Queensland and outbreaks later found in WA.

In cereal cropping in particular, cultivation cuts the rootstock into smaller pieces, each capable of establishing a new plant. Once established in a region, reproduction is mainly vegetative from lateral roots and cut pieces of rootstock. Spread to new areas is mainly by windblown seed. The plant is extremely competitive for nitrogen and water, particularly in dry seasons when crop yields can be reduced by 80%. In addition, the wiry stems become entangled in harvesting machinery making harvesting impossible in some situations. As a consequence, wheat production was abandoned in several areas and C. juncea was considered Australia’s worst weed by the 1950s. Estimates of losses in the 1960s were of around $30 million a year ($100 million in 2010 figures) and the wheat industry offered a reward for the eradication of this weed. 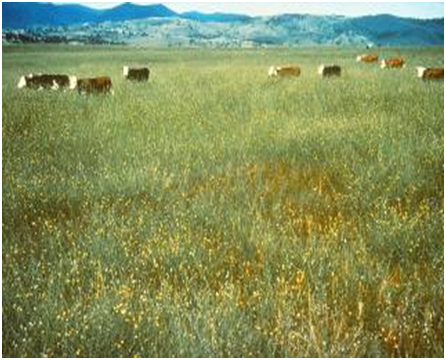 Although skeleton weed is present in North and South America, the only interest in biological control initially was from Australia. Biological control was first suggested in 1936 but was not pursued for another 30 years. In 1965 CSIRO received funding from the Wheat Industry Research Council to start work on reducing the threat from narrow-leaf (form A) skeleton weed. Following consultations between the Centre National de la Recherche Scientifique (CNRS) in France, CSIRO Entomology Division Chief Doug Waterhouse and the Deputy Chief of CSIRO Plant Industry Milton Moore, the CSIRO Biological Control Unit at Montpellier in southern France was established with Dr Anthony Wapshere as Officer-in-Charge. The Unit would provide a research presence in southern Europe where the weed was known to be endemic.

Tony Wapshere and plant ecologist Richard Groves arrived in Montpellier in late 1966 and conducted a survey of skeleton weed in its native habitat of South West France and South East Spain. This was the beginning of what became the world’s first ever ground-breaking, native-invasive range, comparative weed ecology research project. Initially there were four people in the Unit, Tony Wapshere, Richard Groves, Siraj Hasan (a plant pathologist) and Jeanine Bronner (administration officer). They were allocated space in the CNRS Centre D’Etudes Phytosociologiques et Ecologiques in Montpellier and commenced the work on the biological control of skeleton weed. The initial task was to conduct an ecological study of skeleton weed in Europe and search for potential biological control agents. From then on, the story of the eradication of skeleton weed in Australia became intimately linked to the future development of the CSIRO European Laboratory.

By 1968 the unit had grown to seven staff, including the French entomologist Louis Caresche. Continuous ecological studies identified a variety of natural pathogens and established that a rust fungus, Puccinia chondrillina, was particularly effective in maintaining populations of the weed that were 10 to 100 times less than those observed in Australia. 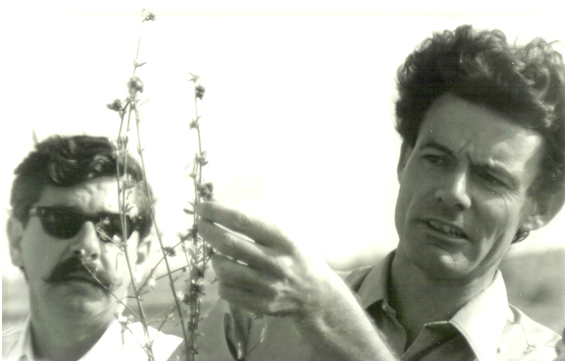 Success after an initial setback

Despite their obvious effect of Puccinia chondrillina on local C. juncea populations, accessions of the rust fungus and a second damaging agent an eriophyid mite Eriophyes chondrillae collected at the beginning of the program did not attack the common Australian form of skeleton weed, form A, the main target of the program. In 1970, the ecological studies of the skeleton weed insects, mites and pathogens were extended to the Eastern Mediterranean, centred on Thessoloniki in Greece, with support for this work from the University of Thessaloniki. It took another 18 months before the discovery by Siraj Hasan of a virulent strain of the rust, in Vieste in Italy (named IT32) and a strain of the mite, in Greece, that attacked form A. Later in 1971, in order to increase research progress on this rust fungus, the CSIRO European Laboratory moved into a building on Avenue Abbe Paul Parguel in Montpellier, close to the experimental plots and glasshouses which were maintained by the CNRS. Host specificity testing was carried out with P. chondrillina, E. chondrillae, a gall midge Cystiphora schmidti, from Greece and local populations of the aphids Uroleucon chondrillae and Chondrillobium blattnyi.

Tony Wapshere obtained approval from CSIRO Entomology to seek permission from Australian Plant Quarantine to allow the introduction of the new rust disease (P. chondrillina) into Australian wheat. This was a world first and involved three years of testing, inspections from Australian Plant Pathologists, and considerable discussions with Plant Quarantine. Despite opposition from some pathologists, approval was given for importation and release in 1971 after three years of testing against other potential hosts. This was the first time in the recent history of plant quarantine control that a plant pathogen had been approved for deliberate introduction to combat a weed. The mite Eriophyes chondrillae and the gall midge C. schmidti were also approved and imported, later in 1971.

The effect of the introduction into Australia was near immediate, with reports throughout South Eastern Australia of the devastation of skeleton weed. All three species released in Australia in 1971 established readily, with the rust fungus P. chondrillina spreading rapidly and widely, causing a severe epidemic and having a dramatic impact on skeleton weed populations. Top growths were consistently heavily attacked (Figure 4), often killed, and over 9-10 years, as the reserves of C. juncea steadily declined and recruitment was virtually eliminated, populations declined dramatically (Figure 5). 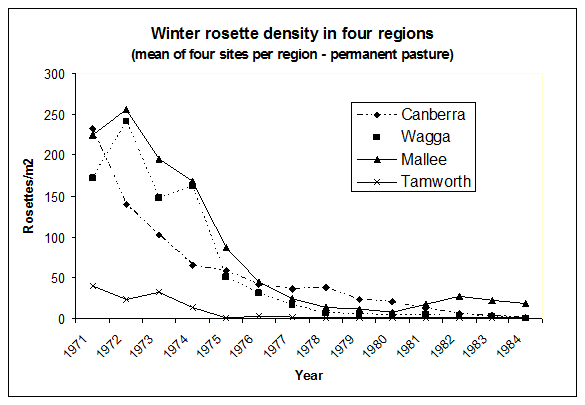 Figure 5.  Density of rosettes of Chondrilla juncea in winter in permanent pasture in the four main regions of the distribution.  (Mean of four sites per region).[Source: J Cullen, CSIRO].

What about the two minor forms of skeleton weed in Australia?

The strain of P. chondrillina introduced into Australia did not attack forms B and C of the weed while the population of E. chondrillae introduced persisted on form B to a very limited extent, but not at all on form C. Cystiphora schmidti attacked all three forms, but was not sufficiently effective on its own. Forms B and C continued to spread through most of the former distribution of form A and the program was continued for several more years to try to find strains or other agents that would attack these forms. No subsequent introductions successfully attacked these forms, but they have not posed the same problem (possibly because they may be less competitive), and C. juncea is no longer a weed of serious concern. The introduction and success of P. chondrillina ignited interest in the use of pathogens for the control of other weeds in Australia and around the world.

The successful control of narrow leaf skeleton weed reaped substantial financial benefit to the Australian Wheat Industry and changed the science of biological control of weeds forever. A study by the Industries Assistance Commission estimated the benefits of eradicating this one weed to Australia to be worth $1.425 Billion [Sheppard et al., Fortieth anniversary review of the CSIRO European Laboratory, XII International Symposium on Biological Control of Weeds].

The program had a number of notable features:

As skeleton weed eradication continued during the 70s in Australia, Tony targeted other weeds originating from Europe. CSIRO agreed to further studies from the Unit on Common Heliotrope, Ragwort, St John’s Wort, and Onion Weed. Other successful Biological Weed Control Programs using rust fungus were implemented for Noogoora Burr and Bridal Creeper, and in the 1980s could have been implemented on Paterson’s Curse (Echium) if a small group of apiarists had not lodged an injunction in the Supreme Court of South Australia to stop this particular Biological Control Program.

It was not until The Biological Control Act of 1984 that established legal procedures for assessing and authorising biological control programs in Australia that this Supreme Court injunction was eventually lifted and the importation of insects and pathogens into Australia resumed in the 1990s.

Following the CSIRO European Laboratory’s move in the 90s to the Agropolis Baillarguet Campus near Montpellier (opened by the then Australian Science Minister Barry Jones on 10th October 1994), the Institut National de la Recherche Agronomiques (INRA) biocontrol and pest management team joined with the CSIRO’s facilities. In addition, the US Department of Agriculture ARS-European Biological Control Laboratory was also constructed on the campus and the three laboratories cooperated to create the largest group of biocontrol researchers in Europe ‘ the Complex International de Lutte Biologique Agropolis (CILBA).

Work at the CSIRO European Laboratory on weeds has developed since then on:

To this day (2014) the CSIRO Laboratory in Montpellier continues to be a standard bearer for Australian scientific excellence and global cooperation on biological control. A 2006 review of the facility calculated that over the last forty years the research on all forms of Biological Control carried out in Montpellier had delivered a cost/benefit ratio of 27:1 ‘ in other words, for every dollar invested by the Australian tax-payer in this Laboratory, Australian industry and the economy had gained a return of A$27.00. As for the original skeleton weed project which was the catalyst of the CSIRO Laboratory in Montpellier, of the $A 12.7 Million invested from 1966 to 1999, Australia recouped $A 1.425 Billion, demonstrating a cost/benefit ratio of A$112 for every dollar invested. The skeleton weed program thus remains the most beneficial biological control of a weed ever implemented in Australia.