To celebrate World Oceans Day on 8 June, we’re releasing the time lapse of the construction of Investigator.

The Executive Director for CSIRO’s Future Research Vessel Project, Toni Moate, said Investigator, is challenging the way ocean and atmospheric research has been undertaken globally, as it will support scientists across a range of disciplines – oceanographic, climate, geological, fisheries and ecosystem research.

“As much as possible, Investigator must be all things to all Australian marine scientists, as Australia has only one blue-water research vessel and this diverse and complex approach to marine and atmospheric science is unique to ocean research globally,” Ms Moate said.

The 93.9 metre Investigator has room onboard for up to 40 scientists, who can stay at sea for up to 60 days and cover up to 10 000 nautical miles in a single voyage and will replace the Marine National Facility’s current vessel, Southern Surveyor, later this year when it’s delivered to Hobart.

“Investigator is challenging the way ocean and atmospheric research has been undertaken globally, as it will support scientists across a range of disciplines – oceanographic, climate, geological, fisheries and ecosystem research.”

The contract to design, build and commission the vessel was awarded to Teekay Holdings Australia, which partnered with Sembawang Shipyard Pte Ltd in Singapore because of its track record and strong commitment to new technologies and innovation.

“Investigator’s capabilities will allow for the rapid advancement of ocean dynamics and air-sea interactions and their implications for weather and climate, and scientists will be able to accurately describe marine ecosystems and enable more effective management of biodiversity and fisheries,” Ms Moate said.

The vessel’s design will feature a core backbone of permanently fitted systems for sampling, data acquisition, management, and communication including winches, acoustic mapping and environmental monitoring instruments including: 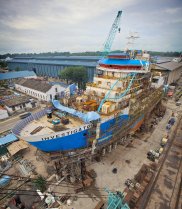 Previous post:
Being cool with waste
Coming up next:
Deadly opportunity for Aboriginal and Torres Strait Islander science