All I want for Christmas is a good night’s sleep

Sleep apnoea is a condition where the air passage in the throat becomes blocked during sleep and causes people to stop breathing.

Brisbane-based dentist Chris Hart had an idea for a mouthguard with airways that would assist airflow past the sleep apnoea sufferer’s soft palette. He approached the CSIRO for help developing a device printed from titanium with a soft medical grade plastic mouthguard.

The result is the Oventus Clearway Device, a ‘duckbill’ which extends from the mouth like a whistle and divides into two separate airways that allows air to flow through to the back of the throat, which bypasses obstructions that cause the problems.

“Chris Hart and his company had the great ideas, we just enabled them to become a reality,” CSIRO’s John Barnes said.

Mr Barnes and his team worked with Dr Hart on both the physical device, some bespoke scanning software, and provided the business modelling support which led to the release of the Oventus Clearway Device to the market.

“The team from the CSIRO have helped us take advantage of the unique benefits of 3D printing technologies to build an Australian product that stands a good chance of making a big impact on the world market, but also on people’s everyday wellbeing,” Oventus Chief Executive Neil Anderson said.

Gold Coast retiree Maurice Hrovat, 57, said the device has been not just life-changing but relationship changing, his wife having long ago sent him to sleep down the hallway or suffer through a night’s sleep with ear plugs.

Now in to his second week with the Oventus Clearway Device, Mr Hrovat reports not only a return to his own bedroom, but an increase in energy levels.

“I used to need an afternoon nap, I was so exhausted from a bad night’s sleep, but I find I am getting up earlier, exercising more, and no more afternoon naps,” Mr Hrovat said.

As the Clearway Device is initially only available through the Turbot Street, Brisbane practice of Chris Hart, with practices in Sydney and Melbourne introducing the product in the New Year, Santa might have to save your device until Christmas 2015, but interested patients or dental or medical practices can find more information on the Oventus website .

Pricing for the device is around $1500 but depends on the patient’s individual requirements and their healthcare funding and insurance cover. 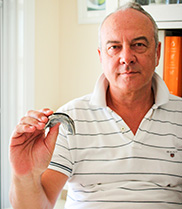