The Deep Space Network — three tracking stations around the world — controls spacecraft travelling through the solar system and receives the data they send back.

Today’s event marks the beginning of the 50th year of the Australian station, the Canberra Deep Space Communication Complex (CDSCC), which CSIRO manages and operates on behalf of NASA.

“CSIRO and its Canberra Deep Space Communications Complex have been essential to NASA’s historic achievements in space in the past and remain a vital asset for our future,” Mr Bolden said.

“We look forward to our ongoing collaboration as we reach higher in air and space, sending humans deeper into the solar system, including a mission to retrieve and visit an asteroid and a human mission to Mars in the 2030s, and peering beyond it.”

“CSIRO and its Canberra Deep Space Communications Complex have been essential to NASA’s historic achievements in space in the past and remain a vital asset for our future.”

The CDSCC’s sister stations are located at Goldstone, California, and near Madrid in Spain. Together, the three stations provide around-the-clock contact with more than 40 spacecraft, including missions to study Mars, Venus, Jupiter, Pluto, comets, the Moon and the Sun.

In its five decades the Deep Space Network has brought back to Earth the sight of the first Moonwalk, amazing views from the surface of Mars, and the first ‘close-ups’ of Jupiter, Saturn, Uranus and Neptune. It sends commands to the Mars rovers, receives data from space telescopes that hunt for planets around other stars and makes observations of asteroids that could one day threaten Earth.

“The Canberra station carried the prime signals confirming the landing of the Curiosity Rover on Mars in August 2012. In 2015 it will have another starring role, receiving the first images of Pluto from the New Horizons spacecraft,” said Dr Charles Elachi, Director of NASA’s Jet Propulsion Laboratory.

“To bring back those images from Pluto, NASA is investing in this station’s future, building two more antennas at a cost of A$110 million,” CSIRO Chief Executive, Dr Megan Clark, said.

There are currently three antennas in operation in Canberra: two 34 m in diameter and one 70 m in diameter.  When they are not tracking spacecraft, Australian scientists can use them for their own science projects.

NASA funds the CDSCC’s operations, providing A$20 million a year. Over the past 50 years it has invested more than A$800 million in the CDSCC, in addition to capital costs. The station employs 92 people.

Australia’s partnership with the USA in space missions formally dates from February 1960, when the two governments signed an agreement to facilitate cooperation.

Tidbinbilla was chosen as the location for the Canberra facility because while it is close to Canberra, hills shield the site from ‘radio-frequency interference’ from the city.

The CDSCC is the first of the three Deep Space Network stations to commemorate the 50th anniversary.

The Canberra Deep Space Communication Complex in 1965. Only one antenna was in operation. (Image: CSIRO/NASA) 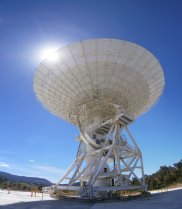 A new 34-m antenna at the CDSCC, DSS35. In 2015 it will receive the first close-up images of Pluto, sent by the New Horizons spacecraft. (Image: CSIRO/NASA)

An artist’s impression of the New Horizons spacecraft at Pluto in 2015. (Image: NASA)