Research published in science journals PLoS ONE and Geochemistry: Exploration, Environment, Analysis, found that at a test site in the West Australian goldfields termite mounds contained high concentrations of gold. This gold indicates there is a larger deposit underneath.

“We’re using insects to help find new gold and other mineral deposits. These resources are becoming increasingly hard to find because much of the Australian landscape is covered by a layer of eroded material that masks what’s going on deeper underground,” Dr Aaron Stewart, CSIRO entomologist said.

Termites and ants burrow into this layer of material where a fingerprint of the underlying gold deposit is found, and bring traces of this fingerprint to the surface.

“The insects bring up small particles that contain gold from the deposit’s fingerprint, or halo, and effectively stockpile it in their mounds,” Dr Stewart said.

“Our recent research has shown that small ant and termite mounds that may not look like much on the surface, are just as valuable in finding gold as the large African mounds are that stand several metres tall.”

Mineral resources make up A$86.7 billion of Australia’s exports and new discoveries in many commodities are required to sustain production. After 150 years of mining, gold and other mineral deposits near the surface have been discovered and miners need new tools to explore deeper underground.

Dr Stewart’s work has also found that insects carry metals in their bodies.

“We’ve found that metals accumulate in excretory systems of termites,” he said.

“Although the insects may not concentrate metals in their bodies, they actively rid their bodies of excess metals. This process shows up as little stones, much like kidney stones in people. This finding is important because these excretions are a driving force in redistribution of metals near the surface.”

Termites showing traces of different elements in their digestive tract. 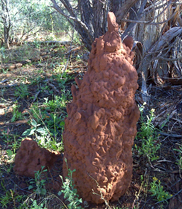 Most of the easy to find resources have been found, so what we need is new tools to find these resources, and there’s plenty there, and we need to be able to find them in a cost-efficient way.

So my research is using termites and ants, other insects, to get below a surface layer of transported material which is hiding our future mineral resources.

We’ve found that termites can reveal the gold deposits beneath cover and they can find these gold deposits where the evidence is four or five metres below the surface.

Previous post:
Our changing beaches – scientists look for a break in the surf zone
Coming up next:
CSIRO cotton research in Narrabri turns 40