The work done for AUSSAT by CSIRO in the 1980s helped revolutionise the satellite industry, an industry that is worth about US$10 Billion annually world-wide. It showed that computer-based methods could be used to halve the antenna part of this industry’s cycle-time from 4 years to about 2 years or less and that with accurate tools (mainly software), antenna engineers could complete an antenna design, which when fabricated in lightweight materials, would work as predicted. Aerospace companies moved quickly to obtain software from various sources and within 7 years, satellite cycle times were down to just over 12 months creating huge savings.

Follow up CSIRO research programs over the next decade included work for:

For their work on the AUSSAT program Geoff Poulton and Trevor Bird, from the Division of Radiophysics, were awarded a CSIRO Medal for Research Achievement in 1990. The legacy of twenty years of research into satellite antennas at CSIRO is not only in the satellite field but equally in radioastronomy where the basic skills have been applied successfully to the Parkes 21 cm multibeam system and ASKAP. See also Antennas for radio telescopes and satellite communications. 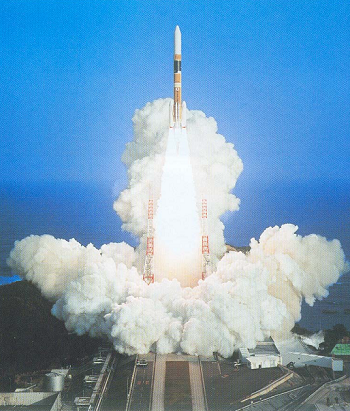 In 1983 the Division of Radiophysics established an R&D program with a goal of placing Australian designed antennas on the second generation AUSSAT satellites. This program was led by Dr Geoff Poulton who was joined by Dr Trevor Bird, (an expert in satellite antenna design) in late 1983. The work was strongly supported by the then Chief of Radiophysics, Dr Bob Frater.

The program involved developing both design and measurement capabilities appropriate to spacecraft antennas. To achieve this objective development of software and antenna measurement facilities commenced in 1984.

Milestones in the development included:

From the outset the Division’s efforts were strongly supported by AUSSAT and this resulted in contracts to help AUSSAT develop the Ku-band spot beam specifications for the second generation satellites [Poulton & Bird, 1987].

In the same time period, in the mid-1980s, the CSIRO Division of Radiophysics was involved in developing a payload for the first USSR satellite Radioastron. Although the Australian and other payloads were successfully tested, sadly this satellite was never launched. The main participants from CSIRO in that project were Dennis Cooper and Kel Wellington.

CSIRO’s role in the AUSSAT-B contract

When Hughes Aircraft Co. won the AUSSAT-B contract in July 1988, the Division of Radiophysics was awarded a sub-contract to design, fabricate and test a prototype antenna system for the Western Australia spot beam on these satellites, the first of which was launched in August 1992. The project leader was Dr Trevor Bird. Additional staff recruited to support the work were recent graduates Stuart Hay and Young Choi. At the time, the Minister for Science, Barry Jones, had to approve the contract.

The purpose of the Western Australia spot beam antenna [Bird et al., 1989] was to produce a shaped beam covering Western Australia, the North-West Shelf and Cocos and Christmas Islands (see above Figure in the RHS panel of the Summary). Key components of the antenna include the reflector, feed array and the low-loss beamforming network. Following detailed testing, which indicated a performance well within specification, the completed feed system was delivered to Hughes in 8 months from the start of the contract. In building the prototype antenna the CSIRO team demonstrated the accuracy of their design software by comparison with measurement. Because of the design software’s accuracy there was no need to trim the breadboard antenna, an important time and cost saving feature. 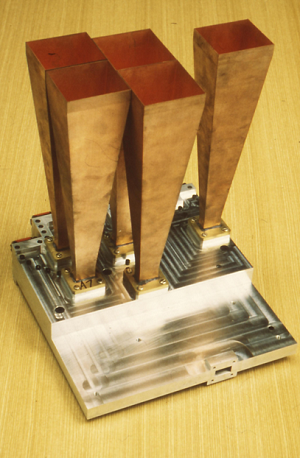 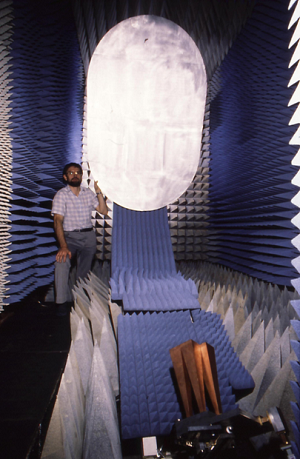 The initial testing of the prototype involved manufacture of a 2-m machined reflector by Hawker de Havilland, manufacturer of machined parts for the Boeing 747. This reflector was then combined with the feed system, which was fabricated in the workshops at CSIRO Radiophysics. The two parts of the final antenna were tested in the near-field measurement chamber. These tests ran for five to six hours.

The chamber was located indoors but in the middle of the site in Marsfield where there were no sealed roads of footpaths. During the testing, Sydney had some of its heaviest rains for many years and the field became water logged. Therefore before going to the chamber we donned raincoats and gumboots, which is unusual for a line of work were cleanliness is important.

The Hughes representative in Australia at the time was Richard Barlow. Richard was always of great help and assistance and the AUSSAT and later projects ran smoothly because of his involvement.

Delivering the hardware through US Customs

There was some concern at the time about transporting the hardware to the US from Australia. It was done by Trevor Bird with the hardware packed in a large suitcase. As Trevor recalled:

As it turned out, it passed through US customs without even being looked at because the Hughes staff member chosen to usher it through was an attractive young lady who was unconnected with the project.

Impact on the satellite industry

The work done for AUSSAT by CSIRO helped revolutionise the satellite industry. This industry is worth about US$10 billion annually world-wide. It showed that computer-based methods could be used to halve the antenna part of this industry’s cycle-time, which was one of the slowest parts of the overall development cycle, from 4 years to about 2 years or less. The approach taken by CSIRO (as one of the first – there were others) showed that the design tools Hughes (as an industry leader) employed were out of date, slow and inaccurate. Designs had to be built and tested. CSIRO showed that, with accurate tools (mainly software), antenna engineers could complete an antenna design, have it fabricated in lightweight materials and it would work as predicted. Hughes and others (e.g. Ford, GE, British Aeropace) moved quickly to obtain software from various sources and within 7 years, satellite cycle times were down to just over 12 months creating huge savings.

Following the work on the Western Australia spot beam CSIRO completed work for: 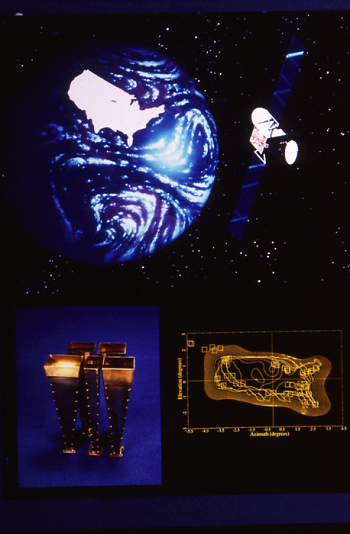 Clockwise, some of the Galaxy IV feed horns, a depiction of the satellite over continental USA and the beam shape designed by CSIRO. [Source: Large figure, Hughes Space & Communications. Inset Figs: CSIRO]

The work on Galaxy for Hughes was followed by a series of small contracts seeking to improve the modelling accuracy of array and shaped reflector antennas. This was followed in 1995 by a three-year contract with Boeing Space and Communications (formerly Hughes) for developing computer code for analysing antennas on-board spacecraft. This code was the main tool used by Boeing for about three years for design of spacecraft antennas. The people involved in this work with Trevor were Stuart Hay, Geoff James, and Francis Cooray. 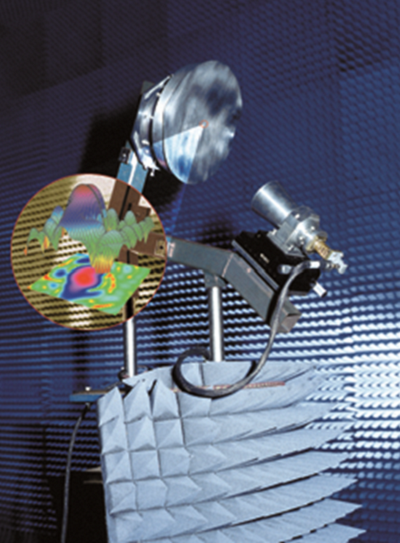 In 1996, CSIRO was an inaugural member of the CRC for Satellite Systems. The aim of the CRC was to launch a microsatellite, called FedSat, in time for the 100th anniversary of Federation. FedSat was the first Australian-built satellite in more than 30 years. On board was a’ world-first’ in microsatellite payload, a Ka-band transponder. Its purpose was to demonstrate future high-speed communications via satellite for rural and remote communications in Australia. The FedSat satellite was launched successfully in December 2002 after some unavoidable delays. 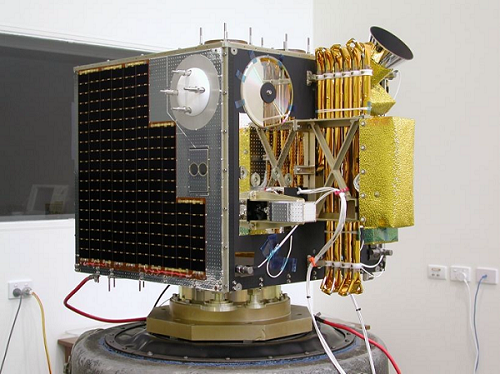 The 58-kg FedSat satellite. The Ka-band antennas are shown underneath in foreground. [Source: CRC for Satellite Systems] 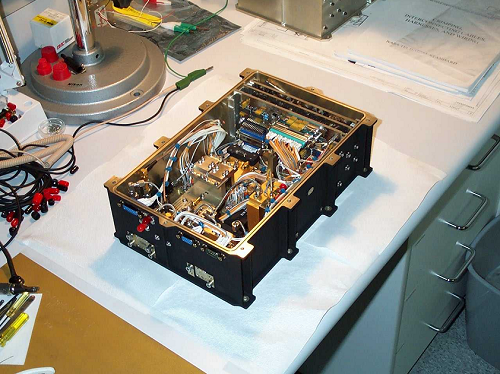 The Ka-band transponder flight hardware on the bench. [Source: CSIRO]

The transponder was fully designed and tested by the CSIRO team [Bird et al., 2000]. It operated successfully in space for three years before the satellite failed. The team achieved a number of firsts for a microsatellite:

The latter achievement showed that low cost, low-power Ka-band systems can be built and flown successfully in space on small, power constrained satellites, which had commercial implications for future telecommunications or defence satellite systems. 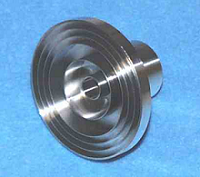 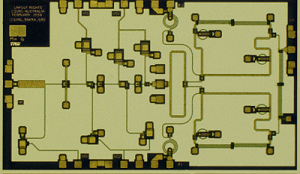 Lightweight Horn for a US Defence satellite application

In late 1996, as a result of CSIRO’s reputation in horn antennas and space activities in general, R.C. Hansen, Inc. invited CSIRO to provide a proposal for the design and development of a horn antenna for a US Defence satellite application. The antenna was to give full-earth coverage and have sidelobes as low as possible. Because it was for use in space, small size and lightweight were very important. As a result of these constraints, in 1997, CSIRO devised a new compact corrugated horn. This horn was called ‘bowl-shaped’ because of its distinctive profile. It was short in terms of wavelengths and had very low sidelobes (36 dB below the peak). A paper describing this horn [Granet et al., 2000] won a best paper award from the IEEE Antennas & Propagation Society in 2001. 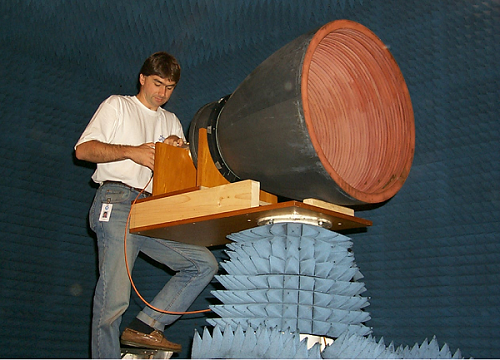 Following a successful performance test, the US Defence department commissioned a lightweight version. In 2000, a lightweight design was fabricated from carbon-fibre-reinforced plastic (CFR-P) materials by Composite Optics Inc. (now ATK Space Systems, San Diego, USA). The final horn had a mass of only 9.3 kg, which was over an order-of-magnitude weight reduction when compared to an aluminium prototype horn. The details of the design and testing are described in [Bird & Granet, 2008]. The horn successfully completed space-qualification tests, indicating that the horn could withstand launch and meet standard space-flight qualification conditions. Unfortunately, the horn never made it into space as the US Defence application was cancelled.

Sadly, by about 2003, the capability and expertise built over twenty years began to disperse soon after the successful conclusion of the FedSat program. There were many reasons for this including the failure of the CRC to attract second-term funding. CSIRO was also changing and space technology had limited appeal.

The legacy of twenty years of research into satellite antennas at CSIRO is partly in the satellite field but just as much in other fields such as radioastronomy where the basic skills have been applied successfully to the Parkes multibeam and the Australian Square-Kilometre Antenna Project (ASKAP) destined for Western Australia.

The Western Australia beam for AUSSAT displayed on a computer screen in 1989. [Source: CSIRO]