Conceived by sustainable designer Joost Bakker, the house is based on design principles that minimise environmental impact and it is set to withstand temperatures equal to that of a worst case bushfire scenario.

Made with straw bale insulation and set into a recycled steel frame with magnesium oxide cladding by ModakBoard, the house challenges traditional construction methods and materials.

The design of the house was tested by CSIRO using a bushfire simulator in Mogo, NSW, earlier this year. The tests proved that the design could resist bushfire attacks and withstand temperatures of over 1000°C.

Known for his restaurants and vertical gardens, Bakker is no stranger to pushing design boundaries. The new home belonging to Daylesford and Hepburn Mineral Springs Company founder, Mitch Watson, will be located on a cliff top and feature a grass covered roof that captures pollution through ‘living’ soils.

Joost Bakker said that right from the inception of this project he has shared a great relationship and synergy for sustainability with the owner of the house.

“We’ve worked hard together to source materials from local suppliers – on one of my first visits to the Daylesford site I passed a paddock of soon to be harvested oats. Mitch asked the local farmer about the potential of bailing the straw after the harvest of the crop and the farmer eagerly obliged.

“Consequently the local farmer’s straw will soon be the foundations and insulation of the new home,” Joost said.

“After a period of radiant heat exposure, the fire was intensified to the face of the building at over 1000°C for almost two minutes, simulating a major fire front. The final stage called ‘post fire exposure’ simulated heavy fuel burnout around the house,” he said.

“The test results proved the house to be a viable option for use in bushfire prone areas,” Mr Webb said.

Research completed by CSIRO shows that by 2020 we expect to see a greater number of extreme fire weather days, longer fire seasons and a greater potential for multiple fire events. 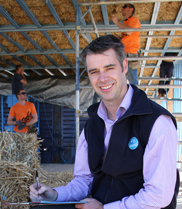