The plot, which is located at Robson Creek on the Atherton Tablelands near Cairns, will allow scientists to monitor the rainforest over the long term and answer questions about the health of this unique Australian environment and any impacts that might arise from climate change.

‘In preparing the plot for research, we established baseline data by identifying, mapping and measuring every tree that was greater than 10cm in diameter so we can continue to monitor them. We censused over 23 000 stems from 212 different species and there is estimated to be more than 400 plant species represented on the plot,’ said Matt Bradford, a field botanist who manages the Robson Creek site for the CSIRO.

TERN and CSIRO are now inviting scientists from Australia and across the world to undertake research at the Robson Creek site, which is the largest rainforest plot that has ever been set up in Australia.

‘It’s been a huge effort, but it’s a great place to be working. There’s such a diversity of life and some of the trees on site are well over a thousand years old.’

TERN and CSIRO are now inviting scientists from Australia and across the world to undertake research at the Robson Creek site, which is the largest rainforest plot that has ever been set up in Australia.

‘Already there are studies under way involving CSIRO and four Australian universities looking at the diversity of plants, birds, animals and insects and the dynamics of how things like water, carbon and gases move through the ecosystem,’ said Mr Bradford.

‘A state of the art flux measuring tower, part of TERN’s OzFlux network, will be installed on the site in coming months that will monitor gas exchange between the forest and the atmosphere, allowing us to observe how climate change might affect this ecosystem.’

The Robson Creek plot forms part of the Far North Queensland Rainforest Supersite, which carries out research on the rainforests of the World Heritage Wet Tropics region. The Rainforest Supersite is one of ten research ‘Supersites’ that make up the Australian Supersite Network established by TERN. These Supersites are enabling long-term monitoring of key Australian ecosystems and provide a unique opportunity for scientists to answer questions about species distribution, the potential for carbon storage and exchange, and the impacts of a changing climate.

‘We envisage that the Robson Creek plot will quickly become an important part of the global forest plot network that will allow for comparisons with other tropical forests and contribute to our understanding of how the world’s forests will adapt to any effects of climate change.’

Mr Bradford and other scientists will be speaking about the Supersites at the 2013 TERN Annual Symposium taking place this week in Canberra. For more information about the Symposium visit www.tern.org.au/Welcome-pg24024.html .

TERN is supported by the Australian Government through the National Collaborative Research Infrastructure Strategy and the Super Science Initiative.

CSIRO’s Matt Bradford admires a slow-growing Gossia shepherdii (Lignum) on the Robson Creek rainforest plot, which he estimates is close to 1000 years old.

A Yellow Mahogany tree (Dysoxylum parasiticum) on the rainforest Supersite showing the unusual trait of bearing fruit on the stem. 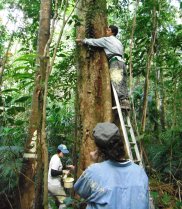 International student interns measuring and marking a tree with large buttresses as part of the census of the rainforest Supersite.