The Great Barrier Reef Project arose when the Great Barrier Reef Marine Park Authority (GBRMPA) sought the advice of CSIRO to help them solve a problem. They needed to create a zoning plan for the whole reef within a few short years and had, by 1980, realised that the traditional surveying they had initiated could not gather the data needed in the time available – or within the funds available – and certainly not both. They wished to know if satellite based remote sensing could help achieve both.

The young remote sensing group in CSIRO Land Use Research, led by David Jupp, quickly concluded that it was feasible and then set about making it happen. Collaboratively, CSIRO and GBRMPA defined useful information for the GBRMPA database, based on remote sensing, to help create the zoning plan and the Australian Survey Office (ASO) implemented it. The research comprised three aspects:

The research was recognised in 1986 by the award of a CSIRO Medal for Research Achievement to Dr David Jupp the leader of the research team. The team included staff from CSIRO, ASO, GBRMPA and MPA.

The advantage of satellite remote sensing

The advantage of satellite remote sensing was that it provided whole reef coverage and relatively accurate positioning of the information and (for that matter) the reefs themselves. This could be done even in places that were inaccessible or only accessible with some risk or at great expense. At the time it was clear from initial satellite photographs that many reefs were not where the charts thought they were. Some charts still used data collected by Captain Cook – and look what happened to him.

However, the information a satellite could provide about the corals and habitats of a reef was obviously less than a person could physically gather on the same reef, but it was still useful and valuable and could be gathered consistently and quickly over the whole of the reef. The type of information that could be obtained related to the spatial position of reefs, indications of the depths of parts of reefs and in particular which parts were likely to be out of water for some periods, maps of reef structures, the orientation of the structures to prevailing seas and weather, geomorphologic zones which would house different combinations of corals and other sea life and properties of the water masses in which reefs were found.

The software, put together to display and analyse this information and bring all of the different data types together onto the same map base as other geographic data, was developed and able to demonstrate the necessary value of remote sensing products using data from the US Landsat satellite. The system itself was named ‘BRIAN’ for Barrier Reef Image ANalysis – not a reference to the 1979 Monty Python movie.

But the job of processing Landsat images to provide this information for the whole reef was daunting. It was also an operational activity rather than a research activity. Therefore, CSIRO and the Australian Survey Office (ASO) worked together to transfer technology and define standardised products that could be produced operationally. The products chosen from the many developed by CSIRO were:

The ASO then took on the operational volume processing and delivery of the data to the Great Barrier Reef Marine Park Authority (GBRMPA). It was a logical step as the ASO had already been providing survey information and understood the many surveying issues involved. So in 1985 the CSIRO research for the Great Barrier Reef project was completed and the CSIRO group went on to other remote sensing applications – such as CASI airborne mapping of the Hawkesbury River and Port Phillip Bay.

And yet, this was not all there was to tell about BRIAN! As early as 1983, the GBRMPA staff expressed frustration at having to come to Canberra (especially in winter) to access the ‘nice end’ of the project. This involved processing and displaying images on computer systems and ‘playing’ with them. As David Jupp recalled:

Fortuitously, the appearance of the IBM XT and new image display hardware enabled serious image processing to finally be done on a PC. Maybe a PC was a bit slower than a contemporary mini-computer but for interactive work and image display even a 1984 era PC was faster than a person thinking. And in the PC world, things were changing almost by the minute.

By 1985, in collaboration with CSIRO scientists Geoff Pickup and Vanessa Chewings from Wildlife and Rangelands Research in Alice Springs and staff at the Melbourne Company, MicroProcessor Applications (MPA) Ltd, the BRIAN image processing system was converted to PC compatible hardware and renamed microBRIAN. It was launched by the then Minister of Science, Barry Jones to the expectant market. The software set consisted of about one hundred programs, each with an integrated menu-driven user interface and extensive on-line help and was a complete research tool providing a comprehensive and up to date complement of classification, rectification and image transformations. In addition to the type of things that were useful on reefs there were added many land applications as well, including an erosion modeling package provided by the group in Alice Springs.

MPA marketed microBRIAN throughout the world, targeting the Asian and Pacific nations in particular as emerging users of remote sensing-based land and coastal management techniques. Among the applications developed at CSIRO Water Resources and applied using microBRIAN were airborne methods for mapping optical water quality. These were applied to Port Phillip Bay and the Hawkesbury River as well as overseas. 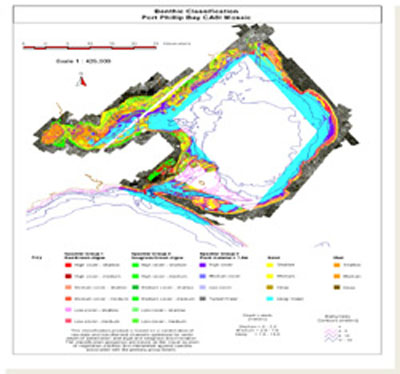 In 1987, CSIRO Publishing developed a Video describing microBRIAN and its potential as it appeared at the time. You can watch by following the link in the Sources below.

A large team from multiple agencies

In 1986 Dr David Jupp was awarded a CSIRO Medal for Research Achievement on the basis of research and outcomes associated with the Barrier Reef Image Analysis (BRIAN) System. As David pointed out:

There was a large team of people from multiple agencies involved in the development of BRIAN and microBRIAN who never got to be collectively rewarded as would have been appropriate and more likely in recent times. But as one of the other 1986 Medal winners said during the award ceremony “make the most of it, you will not get a second one” and so it seems.

Numerous people in CSIRO, ASO, GBRMPA and MPA took part in some or all of the research and development activities and contributed to microBRIAN in the years following 1988. Among these, particular mention is needed for CSIRO staff Kevin Mayo and Barbara Harrison. Kevin’s software engineering was behind much of the activity and certainly its success. Barbara was responsible for two successful commercial CSIRO publications called Introduction to Remote Sensing and Introduction to Image Processing. These books transferred technical expertise from CSIRO to the microBRIAN user community and educated a generation of students.

But, there were many others including important backers in CSIRO such as the Chief of the Division of Water and Land Resources Dick Millington and the later Acting Chief Neil Body and the team of staff including Paul Hutton, Sandra Heggen, Jenny Bolton and Stuart Kendall. In addition, Graham Kelleher, Richard Kenchington and Dan Van Claasen at GBRMPA provided encouragement and welcome funding. David Hopley and Deborah Kuchler at James Cook University provided the local expertise to GBRMPA, Peter Guerin and Peter Holland were vital interfaces to the ASO and Terry Gray, Ron Kreymborg, Rhonda MacDonald and Hal Schuster at MPA had the enthusiasm and judgement needed for commercialisation to occur. And these are just a few.

Could remote sensing help to map the reef on time and within budget? [Source: CSIRO]