He joined the CSIRO Division of Mineral Engineering as a Research Scientist in 1970, rising to the position of Chief Research Scientist in 1981 and Chief of the Division of Mineral and Process Engineering from 1985 -1988. As Chief he led a total of 240 scientists in 4 laboratories that collaborated directly with companies in the mining and metallurgical industries to achieve real gains in performance. The R&D carried out resulted in direct improvements in mining, mineral processing, coal processing and transport, agglomeration processes such as sintering and roasting, as well as major developments in iron making. In his role at CSIRO he was responsible for establishing and maintaining world-class capabilities in all areas of mineral processing. Groups under his direction achieved notable success, including the award of the prestigious Australia prize.

Since leaving CSIRO, Robin has held the following senior positions:

Vice President Research and Technology Development, CRA (later to become Rio Tinto), from June 1994 – Dec 1999. Responsible for research and technology development within the Rio Tinto Group. This included both new process development as well as the improvement of existing processes e.g. mine planning and scheduling, the application of expert systems, mine automation, mineral processing, coal processing, pyrometallurgy, bauxite processing, aluminium production, the production of metals from various sulphide ores, the production of industrial minerals together with supporting technology based on computational fluid dynamics, stockpile modelling, coal process reaction engineering, bio-chemical processing and the like, aluminium smelting, and waste remediation.

The economic treatment of fine-grained zinc minerals was made possible by my leadership of work in ultra fine grinding and in agglomeration and roasting. The application of quantitative mineralogy to mineral processing was shown to be feasible and allowed optimal flowsheet development of several mineral deposits within the Group.

The scrubbing of gases containing fluoride species using toroidal fluid beds and the re-processing of aluminium smelter waste was brought to fruition under my direct leadership.

Rio Tinto, Global Practice Leader ‘ Innovation and then Group Chief Scientist (from 1999-2009). The role focused on delivery of major step change technologies into the operations through R&D (in-house and external), proof of concept and implementation. Innovation strategy for all operations is developed and progress reported to the Board. The two most significant research contributions in this period were the ongoing invention supporting the HIsmelt process (see the patents and note this is the first direct smelting process to be successfully developed since the Han dynasty) and the breakthrough in leaching of chalcopyrite without surface passivation (again see patents).

Melbourne University Kernot Professor of Engineering (from 2010). In this position Batterham is responsible for strategic leadership of major projects in energy. Current focus includes the application of force chain modelling as a key to energy reduction in comminution and the dewatering of biomass and low rank coals. Also, he is leading a project on the use of low temperature sintered titanium diboride as a paradigm shift in aluminium production technologies.

The Chief Scientist advises the Australian Government on all matters associated with science, engineering and innovation, is Executive Officer of the Prime Minister’s Science, Engineering and Innovation Council, is Chair of the Standing Committee of the Prime Minister’s Science, Engineering and Innovation Council, is a member of the Commonwealth, States, Territories Advisory Council on Innovation, the Coordination Committee on Science and Technology, the Cooperative Research Centres Committee, the Australian Research Council, the Science Prizes Committee, the Innovation Summit Implementation Group, (2000-2001), is Chair of the Consultative Panel on national research priorities, the Reference Group for the science and innovation mapping taskforce, is President of the National Youth Science Foundation and the National Science Summer School and is an advisor to the Australian Institute for Commercialisation.

The most significant activity has been a complete review of the science and technology base of Australia and charting the directions for science and technology in Australia over the next ten years. The review resulted in 20 major recommendations to Government, (see The Chance to Change) all of which were accepted. The Government has acted on the recommendations and invested over AUD$8.3 billion in further R&D, its commercialisation and the like. This is the most significant Government investment in science and technology in Australia for many years. Other major initiatives included a renewed emphasis on marine science (see Review of Marine Science) and the revitalisation of the CSIRO (see Flagship Review) which again resulted in major funding advances. The setting of research priorities for the country and setting up the research quality framework initiative are continuing influences on R&D in Australia.

ATSE is one of the four learned Academies in Australia and consists of order 800 eminent scientists and engineers. The President is a member of the Prime Minister’s Science, Engineering and Innovation Council and takes a leading role in advising the Government and the wider public on matters to do with science, engineering and technology. Under Batterham’s leadership, ATSE has focussed its efforts on four topics central to Australia’s future, water, energy, climate and education. Significant symposia, reports and public events on all of these topics have had demonstrable impact. As well, ATSE facilitates international collaboration and Batterham has led delegations, often on behalf of the Government to China, Korea and India as well as hosting delegations to Australia.

Committees and other positions held

Find out more
Previous post:
X-ray vision to characterise mineral ores
Coming up next:
Churning galaxy is a snake pit 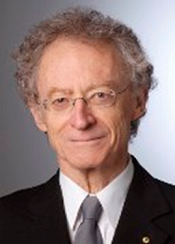