Australians have endorsed the important role mining plays in the prosperity of the nation but there is still much to be done to bolster the industry’s acceptance, trust and support, according to a CSIRO report released today.

Released at the International Mining and Resources Conference in Melbourne, the Australian attitudes toward mining report is based on a survey of more than 5000 people Australia-wide.

According to lead researcher, Dr Kieren Moffat, the survey provides insights and data on community attitudes and possible ways for the sector to build its future opportunities and ‘social licence to operate’.

A key finding is that, Australians consider that mining is a worthwhile pursuit when you weigh up all the associated benefits and costs,” Dr Moffat said.

“The survey shows Australians broadly accept mining and that acceptance underpins the social licence to operate, but it shows that support is fragile and subject to things like perceptions of mining impacts, governance and the sharing of benefits.”

There are however relatively strong community perceptions that mining impacts negatively on the environment, water quality, agriculture, climate change and the health of local communities.”

The survey in 2013/14 covered 1283 people living in or near mining operations in 11 identified regions as well as 1562 people living in non-mining regions and 2276 people in metropolitan areas across the country.

The survey forms part of a larger CSIRO program of work examining the relationship between mining and society at different scales in Australia and internationally – with a similar report just released for Chile.

“Australians  across mining, non-mining and metropolitan regions strongly agreed that mining contributes significantly to the economy, to the standard of living, to our way of life and our future prosperity. Those surveyed in each group also generally agreed that mining creates jobs, opportunities and infrastructure in regions,” Dr Moffat said.

“There are however relatively strong community perceptions that mining impacts negatively on the environment, water quality, agriculture, climate change and the health of local communities.”

Those surveyed expressed mid-range levels of trust in state and federal governments, the industry and non-government organisations and a below mid-range rating of the capacity of governments or legislation to keep the industry accountable.

“The work indicates that Australians trust and accept the industry more when the industry hears and is responsive to their concerns, when benefits from mining are shared equitably, and when the legislative and regulatory frameworks we have in place provide confidence that industry will do the right thing,” Dr Moffat said.

The data is available through a CSIRO portal to allow anyone interested access to explore from their own perspective.

“The work shows that building trust and acceptance and the ‘social licence’ of the mining industry will require industry, governments and other stakeholders to work together with the wider community,” Dr Moffat said.

Mining was viewed as a central and significant contributor to Australia’s economy and standard of living, a ‘necessary’ industry for Australia, and being important to Australia’s future prosperity.

Survey participants were asked whether mining was worthwhile considering the benefits and negative impacts. 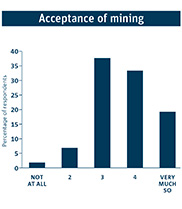 Distribution of responses about the acceptance of mining in Australia.

Mean levels of perceived distributional fairness of benefits from mining overall, and by region.