William Gordon Crewther was born in 1918. On completion of his secondary education at Kyneton High School in 1934, he joined the Victorian State Public service as a clerk in the Police Department but transferred to the Department of Agriculture in 1935. He continued studies in science and mathematics in the evening at the Australian Coaching College and later at the University of Melbourne where he commenced a course in Agricultural Science. He converted to Natural science in 1938 and was awarded a Public Service Free Place. He completed his BSc in Biochemistry, Microbiology and Chemistry with 1st Class Honours in 1940. Further study at the University of Melbourne led to the award of the MSc degree (with 1st Class Honours) in 1942, the title of his thesis being ‘The Nature of Enzyme Action’.

From 1942 to 1943, he worked at the Victorian Department of Agriculture’s Dairy Research Institute at Werribee on bacteriophage in cheese starter cultures before joining the Biochemistry Section of the CSIR Division of Industrial Chemistry in 1943. Crewther had been interviewed by Dr Ian Wark, Chief of the Division of Industrial Chemistry, who in his letter of recommendation of appointment to the Secretary CSIR, commented:

At University he did a most distinguished course with honours, his major subject being biochemistry, securing an exhibition in both his third and fourth years and obtaining his Master’s degree in 1942. Miss K. Law, Lecturer in Biochemistry and Professor Trikojus, Professor of Biochemistry, speak highly of Mr Crewther’s abilities.

It is just 40 years ago that he (WGC) appeared in the CSIR laboratory where I was a junior assistant (15 years old) and he was a hardened research worker ‘ around 25 years of age. For a time both of us worked in the same laboratory in the presence of the boss (FGL) seated at his desk.

In February 1944, Francis Gordon Lennox was to write in a memorandum to Head Office that:

Crewther, who is aged 25 years, has a very mature outlook and although he has been with us for only three months it is apparent that he is a really first-class research man. He is keen on the physico-chemical side of biochemistry, and can therefore make an acceptable contribution to all the work in the Biochemistry Section.

Gordon Crewther’s prime research interest was in the field of protein biochemistry, with particular emphasis on the structure of wool keratins. He was the author or co-author of 92 scientific research papers and reviews including editorship of the five volumes of the Proceedings of the First International Wool Textile Research Conference in 1955 and of the Proceedings of the 1967 Symposium on Fibrous Proteins. During his long (40 years) period of service with the organisation, Gordon Crewther carved out a distinguished career in biochemistry. His contributions at CSIRO included:

In 1963, he was appointed Assistant Chief of the Division a position he held for ten years. During this time he oversaw the design and construction of five buildings incorporating research laboratories, conditioned equipment rooms, pilot scale areas, library, electrical sub-station and offices.

His leadership abilities were recognised early in his career when in 1946 his Chief of Division Ian Wark wrote in a memorandum to Head Office that:

Crewther may well develop into an understudy to Dr Lennox in the Biochemistry Section. He has done excellent work in the field of fermentation research, which will become one of the most important to be handled by the Section. We want him to assume leadership of this work immediately.

In 1973, with Gordon Lennox’s transfer to the position of Counsellor (Scientific) at the Australian High Commission in London, Crewther was appointed Chief of the Division of Protein Chemistry, the position he retained until his retirement in November 1983, exactly 40 years after joining CSIR. During this period the Division underwent major changes in direction with two thirds of the staff in wool research redirected to new projects in the following areas:

The latter three projects were in collaboration with the Division of Animal Health. The research on IBDV vaccine development was commercially successful and was awarded the 1997 CSIRO Chairman’s Medal.

In 1979, Crewther toured China as part of a three man team delivering lectures in protein chemistry ‘ sponsored by Academia Sinica and the Australian Academy of Science. The other members of the delegation were Professor Syd Leach, Melbourne University and Professor Neil Izaacs, from St Vincent’s Institute for Medical Research, Melbourne.

In 1985, he again toured China delivering lectures on ‘The Structure of Wool Keratin’ at Urumuqi, Xinjiang Province, Beijing and Shanghai. The trip was sponsored by the Institute of Chemistry, Xinjiang Branch and Academia Sinica.

From 1943 until the Australian Biochemical Society was established in 1954, Gordon Crewther was associated with the Biochemistry group of the Royal Australian Chemical Institute (RACI), for much of that time serving as Secretary or Chairman of the group.

For many years he was a member of the Faculty of Science and the Standing Committee of Convocation at the University of Melbourne.

He served on the Council of the Strathcona Baptist Girls Grammar School for ten years and served as the Baptist representative on the School Libraries Committee set up by the Commonwealth Government to assess needs and distribute funds for the building of school libraries in private schools.

Dr Crewther passed away on 28 November 2011. In an email to staff he was remembered as an outstanding scientist who made seminal contributions to our understanding of the structure of the wool fibre and its constituent proteins. He was a wonderful leader who cared deeply for the welfare of his staff and maintained an interest in the lab long after his retirement in 1983.

For his contributions to science Gordon Crewther received the following awards: 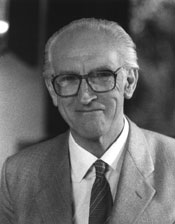