Australian scientists have unveiled a new theory which explains the mysterious phenomenon known as ball lightning.

Sightings of ball lightning have been made for centuries around the world – usually the size of a grapefruit and lasting up to twenty seconds – but no explanation of how it occurs has been universally accepted by science.

In a paper published in the Journal of Geophysical Research Atmospheres entitled ‘The Birth of Ball Lightning’ CSIRO and Australia National University scientists present a new mathematical theory which explains how and why it occurs.

The new theory focuses on how ball lightning occurs in houses and aeroplanes – and how it can pass through glass.

Led by CSIRO scientist John Lowke, the new theory focuses on how ball lightning occurs in houses and aeroplanes – and how it can pass through glass. His theory also proposes that ball lightning is caused when leftover ions (electric energy), which are very dense, are swept to the ground following a lightning strike.

“A crucial proof of any theory of ball lightning would be if the theory could be used to make ball lightning. This is the first paper which gives a mathematical solution explaining the birth or initiation of ball lighting,” says Lowke.

Lowke proposes that ball lightning occurs in houses and aeroplanes when a stream of ions accumulates on the outside of a glass window and the resulting electric field on the other side excites air molecules to form a ball discharge. The discharge requires a driving electric field of about a million volts.

“Other theories have suggested ball lightning is created by slowly burning particles of silicon formed in a lightning strike, but this is flawed. One of the ball lightning observations cited in this paper occurred when there was no thunderstorm and was driven by ions from the aircraft radar operated at maximum power during a dense fog.”

Lowke used eye-witness accounts of ball lightning by two former US Air Force pilots to verify the theory. Former US Air Force lieutenant Don Smith recalls: “After flying for about 15 minutes, there developed on the randome (radar cover) two horns of Saint Elmo’s fire. It looked as if the airplane now had bull’s horns…they were glowing with the blue of electricity.”

Lowke’s paper gives the first mathematical solution explaining the birth or initiation of ball lightning using standard equations for the motion of electrons and ions. He argues it is unique because it not only explains the birth of the ball but also how it can form on glass and appear to pass through glass resulting in globes of light in people’s homes or in aeroplane cockpits.

High resolution version of image not available for download. 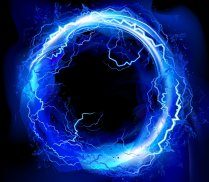 Ball lightning has been reported by hundreds of people, in countries of the world that report such things for hundreds of years and it has been a mystery.

There are many observations of ball lightning appearing from a glass window either in a house or as in two cases in the paper we have produced in the cockpit of an aircraft.

This has been a real mystery. A mystery to such an extent, that people who have seen it have been afraid to talk about it because they are afraid that they will be regarded as being nuts.

Our explanation in the paper is that it is due to ions piling up on the outside of a window, and windows glass are generally an insulator, the ions pile up to such an extent that  they cause an electric field on the inside of the window which in exceptional circumstances can be sufficient to spark a discharge.

In our paper, observations are from pilots. In each case there was a crew of three other people inside of the cockpit who all saw the same thing, and discussed it afterwards. And these are navigation staff who are staring through the window to the outside of the plane, and the significance in our paper is that we actually see the initiation of the ball and I call it the birth of ball lightning.