CSIRO and its industry partners plan to trial the Direct Injection Carbon Engine (DICE) in Victoria’s Latrobe Valley, the second largest and lowest cost brown coal resource in the world, with the aim of reducing emissions from brown coal-generated electricity by 50 per cent compared to current technology.

“CSIRO is excited about the potential for DICE to lower power costs, halve CO2 intensity and create a new export market for both brown and black coal.”

Brown Coal Innovation Australia (BCIA) has allocated A$1 million to the technology trial, which is designed to maximise the value of Australia’s unique resource by significantly reducing emissions associated with the use of brown coal.

The collaboration was announced today by Victorian Minister for Energy and Resources, Russell Northe, at the third International Low Rank Coal Industry Symposium in Melbourne.

“Australia has the second largest brown coal resource in the world but current utilisation technologies are carbon intensive so we need to implement cleaner and more efficient ways to generate energy from coal,” Dr Wonhas said.

“CSIRO is excited about the potential for DICE to lower power costs, halve carbon dioxide (CO2) intensity and create a new export market for both brown and black coal.”

The advanced coal technology involves converting coal or biomass into a water-based slurry that is directly injected into a large, specially adapted diesel engine. The fuel burns to produce intense temperature and pressure in the engine, which provides highly efficient power to turn electrical generators.

An existing laboratory scale prototype engine will trial fuel based on Victorian brown coal and this work will be followed by trials using the same fuel in a large scale test engine in Japan.

“The energy sector has long been a lynchpin of our country’s economic prosperity and coal is expected to continue to make an important contribution in decades to come. I believe CSIRO has a critical role to play in supporting industry to minimise the environmental impacts from coal through the application of world leading science,” Dr Wonhas said.

“Thanks to the support of BCIA, we can partner with industry to deliver solutions like DICE that will ensure more efficient and sustainable use of our brown coal reserves and give Australians continued access to affordable and reliable energy supply.” 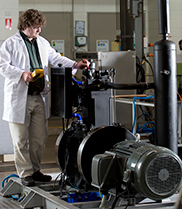 The Direct Injection Carbon Engine trial is designed to maximise the value and reduce emissions associated with the use of Australia’s brown coal resource.