CSIRO scientists have created a 'solar sponge' which captures and then releases carbon dioxide using the power of natural sunlight – as published today in scientific journal Angewandte Chemie.

The breakthrough presents a new way to recycle CO2 emissions using renewable energy. The ‘sponge’ which is made from a new smart material called a MOF – metal organic framework – adsorbs carbon dioxide, but when exposed to sunlight, instantaneously releases it.

Known as dynamic photo-switching, this capture-and-release method is extremely energy efficient and only requires UV light to trigger the release of CO2 after it has been captured from the mixture of exhaust gases.

“This is an exciting development for carbon capture because concentrated solar energy can be used instead of further coal-based energy to drive the process.”

Dr Matthew Hill, who was awarded a 2012 Eureka Prize for his MOF research and led the CSIRO group conducting this research, said: “The capture and release process can be compared to soaking up water with a sponge and then wringing it out. When UV light hits the material its structure bends and twists and stored gas is released.”

“This is an exciting development for carbon capture because concentrated solar energy can be used instead of further coal-based energy to drive the process,” he added.

The traditional process for carbon dioxide capture has been to use liquid absorbers such as amines to remove flue gases at a coal-fired power station before they are released into the atmosphere. They are then heated to release the CO2 which is then stored and can be re-used. This process can consume as a much as 30 per cent of a power plant’s production capacity.

MOFs absorb as much as a litre of nitrogen gas in just one gram of material. This is possible because MOFs have the surface area of a football field in just one gram, meaning that gases can be soaked up like a sponge to all of the internal surfaces within.

In their paper titled ‘Dynamic Photo-Switching in Metal Organic Frameworks as a Route to Low Energy Carbon Dioxide Capture and Release’ CSIRO researchers show that when exposed to concentrated UV light the MOF sponge instantaneously releases up to 64 per cent of absorbed CO2.

Lead researcher and author of the paper, Richelle Lyndon, who is also a Monash University student, said: “The MOFs are impregnated with light-responsive azobenzene molecules which react to UV light and trigger the release of CO2. It is this reaction, and the material’s ability to bend and flex, which makes the material we have created so unique.” 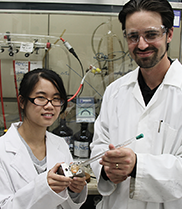 Ms Richelle Lyndon and Dr Matthew Hill with the equipment used to make the ‘solar sponge’. 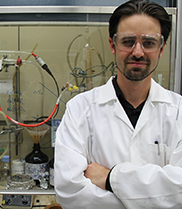 Dr Matthew Hill: We think that with this discovery, MOFs could be used to capture carbon dioxide from power stations and by using the sponge effect we can release the gas after we’ve caught it using sunlight and we think this is a way to make carbon capture a lot lower energy.