It may not have spawned its own movie or played a part in NASA's moon landings, but in its own way, CSIRO’s Phytotron facility has made no less a contribution to science than its more famous cousin, the Parkes Radio Telescope, aka "The Dish".

The heritage-listed building will celebrate 50 years of globally significant plant research this week when Australia’s Chief Scientist, Prof Ian Chubb, opens the newly-refurbished Phytotron facility at Black Mountain as part of the Centenary of Canberra celebrations.

The Phytotron, designed by renowned Australian architect Roy Grounds, has long been an incubator for world-leading research by CSIRO plant scientists.

“The refurbishment of this building enables the Phytotron to continue to produce great science and act as a melting pot for the world’s leading plant scientists to tackle pressing global issues.”

Pioneering work carried out there in the 1970s helped explain how plants react to environmental factors such as temperature, light intensity and daylength – critical information for improving crop productivity. It has played a major role in Australian plant research and has evolved with the times to remain an important facility in the current era of genomics and phenomics research.

Constructed around the same time as the Parkes Radio Telescope, the Phytotron was another ambitious CSIRO infrastructure project, which has gone on to make a lasting contribution to the Australian community.

The Chief of CSIRO Plant Industry, Dr John Manners, said the 50th anniversary of the Phytotron marked an important day for Canberra, as well as for Australian science.

“The refurbishment of this building enables the Phytotron to continue to produce great science and act as a melting pot for the world’s leading plant scientists to tackle pressing global issues,” Dr Manners said.

Prof Chubb will open the refurbished Phytotron at CSIRO’s Black Mountain Laboratories at a ceremony on Thursday, 18 April, as part of the Phytotron 50th Jubilee celebrations.

For more details about the Phytotron Jubilee event, including speaker bios, see: Phytotron

The Phytotron, a melting pot for the world’s leading plant scientists.

CSIRO Plant Industry assistant chief Raymond Milton Moore with architect Roy Grounds, examining the plans of the newly-built Phytotron. The inscription on the wall reads “Cherish the earth for man will live by it forever”. 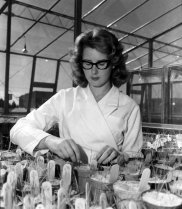 Facilitator:
Ladies and gentlemen I know have a very great pleasure indeed in
inviting the right Honourable Prime Minister to speak to you and to declare this
controlled environment research laboratory open.

Robert Menzies:
Sir, your excellencies and ladies and gentlemen, I’ve been very much
struck today by the profound difference there is between politics and
agricultural biology, you’ve just had it explained to you, those who are not
already expert, that what is to be done in this place is to control the
environment, in politics it’s the other way round (laughter). That’s today I’ve
been down freezing at the airport saying goodbye to the King and Queen of
Thailand, and acting as nature has equipped me to do as a wind break for the
Queen, with a wind blowing practically at freezing point. And here I am this
afternoon being gently cooked, feeling all the germs that I acquired in the wind
this morning, getting on nicely (laughter), being encouraged, being cultivated
inside me.

And there’s one other thing I’d like to tell you
about a Phytotron, and I hope this won’t go any further, I beg of you to keep
this dark. But when CSIRO first of all decided that a request ought to be made
to the government to find the money for a Phytotron, the proposal fell into the
hands of a relatively junior officer in my department who read it and in all
good faith scribbled out a note saying this is nonsense, Olivet already has a
Cyclotron, why do we have this overlapping and duplication (laughter). Now
that’s a true story, but it’s a good story because it exhibits something that
people don’t always understand, the astuteness of the civil service to avoid
overlapping and waste, thus cogging a snoop at Parkinson’s law with a
vengeance.

Well sir you came along or somebody came along and
explained to me what a Phytotron was, and I must confess that from that moment I
found myself vastly interested in it. The idea of taking what has been in the
past field work in remote places conducted under great difficulty and
concentrating it in point of time and space, that seemed to me even to my
ignorant lay mind, a dramatic thing, the value of which I thought quite obvious.

It isn’t always easy to resist the CSIRO though it
thinks we resist it too much, Sir Frederick White referred to his great
predecessor Ian Clunies Ross, I always thought of him not purely just as a
scientist in himself though he was, but as the greatest public relations man for
science that this country has ever had. A phenomenal genius for not sparing
himself, for going out day after day, week after week making other people
understand the importance of the work that’s being done in scientific research
and of course in particular by CSIRO. I suppose that if we were to ask
ourselves what in the last 20 years up to 50 years had been the great
distinguishing feature of this century apart from wars and political confusions,
the answer would be the flowering of science and the growing application of
science to technology to the problems, the practical worker day problems of the
world.

And I’m perfectly certain that this is in
particular true of agricultural scientific work, each time we open a report by a
statistician or by a demographer and we’re told how rapidly the population of
the world will double and how rapidly it will triple. We would need to be very
insensitive to the problems of life, if we weren’t almost appalled by the idea
that the same earth will have to sustain so many more thousands of millions of
people, and it will sustain them only if literally the earth is encouraged to
bring out its harvest, and in this field of scientific investigation I think we
see one of the great hopes of the future of mankind, one of the great hopes of
future peace oddly enough. Because in a starving world there will always be
war, and the great hope of peace with a growing population in the world is that
men of devotion and women of devotion and distinction should give their talents
to the kind of investigation that will be conducted here.

Now it isn’t always easy is it to make people
understand how important that is, we’re a bit given to taking things for
granted, we ought to be able to bring up not a few hundred people, but a few
scores of thousands of people to have a look at this and see what’s in the wind,
see what’s going on, see what the great objectives are, because then I think we
would have a more understanding and encouraging public. But there’s another
aspect of that which I want to mention to you, we are in Australia I speak only
for Australian’s here this afternoon, we’re not a cynical race because cynicism
is well what’s the use, but we’re a sceptical race, we need to have it proved,
show me, show me about this. I can remember I’ve said this before, I think in
the presence of Dr Dixon, I can remember a time when I was a small boy in the
country when an agricultural scientist put himself to the trouble of going up
into the wheat country where I was born and trying to explain to a collection of
wheat farmers that a mysterious subject called Super Phosphorus, if applied to
that light sandy loam in that part of the country, would bring about an enormous
increase in productivity.

And you know, you could just almost hear what was
going on in the mind, oh I don’t know, what does it cost, someone said oh well I
don’t know, I don’t know the old man didn’t use it, oh well I don’t know, you
see and at the end about three reasonably enlightened farmers decided that
they’d give it a go. I think from a long memory of it that they were told at
that time in this particular soil if they were to use a hundred weight of Super
to the acre, and these three decided that they would try it out rather
tentatively with half a hundred weight you see. And when they got another three
bushels to the acre as compared with their neighbours, then a few more people
came to the conclusion it was pretty good, you see this is not a cynical
attitude of mine, but it’s a sceptical attitude of mine. And if I were asked to
say to name one defect in our present technological equipment in these areas, I
would say it is that there’s too great a gap in point of time and in point of
space between the work done in a place like this and the work done on the farm
or sheep station.

In other words we are so far in Australia rather
failing on the extension of the results of research, to the man on the farm,
this requires of course a great deal of cooperation between Commonwealth and
states we have divided authorities on it, but it also requires in the farmer
himself a realisation that he will not get the benefit of these investigations
until he is not only interested but enthusiastic and keen and demanding about
getting it brought to him and to his farm. And I know, sir, that you because
you’ve spoken many times to me about this, that you would regard it as a state
almost of paradise, if the work done, the magnificent work done by CSIRO found
its way out quite quickly, quite effectively to the people who are engaged in
production, because there’s no doubt about it all the old ideas have gone going
back to that remote period when I was a boy myself, Australia was a desert, it
had a few sketchy bits of cultivable land around the margins, it had some areas
where the rain fell agreeably.

But oh it could never sustain a population of more
than ten millions and then some bold fellow said oh no 20, 20 someday not this
century of course but sometime in the future 20, and now we’re casting this from
all those silly prejudiced ideas. And if we are now discovering that the same
area of land and of course it’s been enormously extended, but the same area of
land with the benefits of scientific research brought to it can produce twice as
much, three times as much, four times as much as it did, then we ourselves are
making a contribution to the sustenance of an enormous, relatively enormous
population in our own country. And also making available for developing
countries which have much more acute problems of population and feeding the
results of the work that will be done here. So sir I say that I’m grateful to
you for allowing me to come along here and have the pleasure of saying a few
very inadequate words on what I believe to be one of the exciting occasions in
applied science in the history of our country. So I declare the Phytotron, the
controlled environment, the Series I’ll call it I’m now told for short, whatever
you call it I declare it open.