Deep-space flashes light up a new face of Nature

CSIRO’s Parkes radio telescope in eastern Australia has detected mysterious ‘flashes’ of radio energy from the distant Universe that may open up a whole new area of astrophysics. The surprising finding, made by a team of scientists from ten institutions in Australia, the USA, UK, Germany and Italy, is published in today’s issue of the journal Science.

“A single burst of radio emission of unknown origin was detected outside our galaxy about six years ago but no one was certain what it was or even if it was real.”

Dan Thornton, PhD student with the University of Manchester and CSIRO.

“Staggeringly, we estimate there could be one of these flashes going off every ten seconds somewhere in the sky,” said research team member Dr Simon Johnston, Head of Astrophysics at CSIRO Astronomy and Space Science.

Four flashes were detected, each from a different direction and each lasting for only a millisecond (a thousandth of a second).

The characteristics of the radio signal — how it is ‘smeared out’ in frequency from travelling through space — indicate that the flashes came from up to 11 billion light-years away.

No gamma rays or X-rays were detected in association with the flashes, and the astronomers have ruled out the flashes being from phenomena such as gamma-ray bursts, the merger of two neutron stars, merging black holes, or evaporating black holes.

Dan Thornton, a PhD student with the University of Manchester and CSIRO, is the lead author on the Science paper. “A single burst of radio emission of unknown origin was detected outside our galaxy about six years ago but no one was certain what it was or even if it was real,” he said. “So we have spent the last four years searching for more of these explosive, short-duration radio bursts.”

That original radio flash, known as the ‘Lorimer burst’ after its discoverer, was also found with CSIRO’s Parkes telescope.

“Finding these things requires both a sensitive telescope and spending enough time looking, and that’s what we’ve done with Parkes,” said Dr Johnston.

CSIRO’s Australian SKA Pathfinder telescope, now under construction in Western Australia, will be running a major survey for transient radio sources like the ones just found with Parkes.

“With the ability to detect these very fast sources we are opening up a whole new area of astrophysics,” said Dr Johnston. 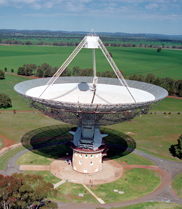 [Transcript for audio file to be supplied.]