A study to determine whether energy production can simultaneously be used to positively affect regional climates, including modifying rainfall patterns, has begun in CSIRO’s weather and energy research unit.

In a collaboration between Game Changer Ventures and CSIRO, the study will initially focus upon what effects large solar arrays, used to generate renewable solar power, might have on the surrounding climate.

The study will initially focus upon what effects large solar arrays, used to generate renewable solar power, might have on the surrounding climate.

In a geo-engineering study with the potential to assist in the design and planning of extensive solar farms, CSIRO climate scientists Drs Alberto Troccoli and Jack Katzfey will investigate the possible changes to the local climate produced by massive solar farms.

The scientists will specifically evaluate whether such solar arrays can be engineered in such a way as to produce statistically significant rainfall in addition to electricity.

“Local climate impact would depend significantly upon the location of the solar array relative to prevailing winds and atmospheric moisture, as well as the shape and orientation of the array.

“It is interesting,” said Dr Troccoli, “that solar power plants proposed under the Solar Flagships program in Australia are not designed with any consideration of their effect on weather but this should be determined, both positively and negatively, before they are built.

“For example, we will be trying to assess whether a large solar array can be engineered in such a way as to increase rainfall or induce rainfall in the vicinity of the array, preferentially downwind and not directly over the array,” he said.

Mr Riedl, CEO of Game Changer Ventures which is partially funding the project, said that with arrays the size of cities already in planning, such as the one under the DESERTEC project in Morocco, designed to help meet Europe’s energy needs, there are likely to be changes to the local climate and it is important to engineer the arrays in such a way as to make the changes beneficial whenever possible.

Large solar power plant installations will locally modify solar reflection, land surface characteristics, vegetation type and energy absorption. “This will have an effect on both the local dynamics and the energy balance of the atmosphere, in ways difficult to compute with simplistic assumptions,” Dr Troccoli said. “A complex numerical dynamical model will thus need to be employed to provide insights into this intriguing problem.”

Mr Riedl said the use of solar panels with reflective backs as opposed to absorptive fronts, would enable these factors to be controlled to some extent by selectively flipping appropriate panels across the array thus changing panels from absorbing energy to reflect it.

High resolution version of image not available for download. 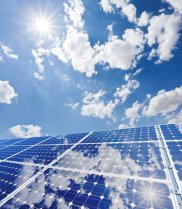 A CSIRO study has begun into the effects large solar arrays, used to generate renewable solar power, might have on the surrounding climate. (Image: iStock)

Previous post:
Vaccine for killer Hendra virus launched
Coming up next:
Scientists team up with Google in an Australian first