Scientists from CSIRO and the University of Western Australia have teamed up with Kimberley Traditional Owners to test a new molecular technique that has the potential to revolutionise the discovery of new species, particularly those living in remote and poorly studied parts of the world.

Working in the virtually inaccessible rainforest vine thickets of Australia’s National Heritage-listed Kimberley region, the team are using a technique known as ‘ecogenomics’ to survey the area’s insect biodiversity, and rapidly describe what are expected to be hundreds of unique and rare species. The technique involves identifying species based on their DNA and morphology, and is much faster and more cost effective than traditional taxonomic approaches.

“Using ecogenomics, we will be able to understand what is there and how unique it is in months rather than decades,” said CSIRO’s Dr Owain Edwards, the project leader.

“Using ecogenomics, we will be able to understand what is there and how unique it is in months rather than decades.”

“Identifying, or describing, new species is the first step towards ensuring their ongoing survival. However, with millions of undescribed species around the world, this is no small task, particularly as many of these species will likely be found in remote locations.”

“Faster ways of surveying biodiversity are essential if we are going to effectively manage the world’s unique ecosystems.”

The remote and hard to access nature of the rainforest pockets of northwest Kimberley, as well as their isolation from each other, mean that the insect life there is some of the least known on the planet and is likely to be highly endemic (which means unique to that area). This provided the ideal location for the team to put ecogenomics to the test.

“Over the coming months we’ll be analysing the DNA of about 300 000 insect specimens collected from 36 isolated rainforest pockets across the Kimberley and screening them for the presence of endemic species,” said Professor Raphael Didham, an invertebrate expert that holds a joint position with CSIRO and the University of Western Australia.

The technique also has the potential to improve the efficiency of environmental impact assessments and conservation management.

“The speed and accuracy at which we’ll be able to assess a given site, even a really remote one, will greatly improve the efficiency of evaluating possible biodiversity impacts,” said Dr Edwards.

The scientists and Indigenous rangers from the Wunambal Gaambera and Dambimangari Aboriginal Corporations carried out the wet-season insect surveys over a one month period in January, at a time when the Kimberley is in its active growing season.

The team clocked up over 7000 kilometres in a helicopter accessing the isolated rainforest pockets across a 21 000 square kilometre region of the northwest Kimberley.

On-the-ground training provided to rangers as part of the project will mean insect sampling activities can continue in the Kimberley in the future.

The research is supported by the Science and Industry Endowment Fund .

High resolution versions of these images are available on request, see Contact Information. 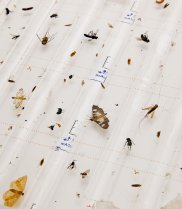 Insects collected with a ‘Malaise’ trap near Walcott Inlet, northwest Kimberley. About 300 000 insect samples were collected as part of the project. (Image: Bruce Webber)