From his formative years growing up in New Zealand, Keith Sainsbury had an intense interest in the sea. He combined his personal interests with his professional career which culminated in his being awarded the highly prestigious Japan prize in 2003. The award was for his outstanding contributions to food production based on sustainable ecosystems, a concept that he and his colleagues in CSIRO have championed in both theoretical and practical ways for over two decades.

During this time he:

In addition he has for many years been a member or chair of numerous national and international panels (FAO, OECD) giving advice on fisheries management.

At the time of Keith Sainsbury’s appointment to CSIRO Australia was preparing to declare its 200 mile Fishing Zone and was aware that there was a large Taiwanese trawl fishery operating off northern and northwestern Australia. This fishery would fall within Australia’s 200 mile zone and so would come under Australia’s federal management jurisdiction. Very little was known in Australia about the fish resources or ecology of the northwest continental shelf, but it was known that the tropical fish community was diverse.

Between 1978 and 1980 he led a series of research survey cruises along the continental shelf from NW Cape in the west, along the Kimberly coast, through the Timor Sea east to Darwin. As a result of these surveys and in collaboration with professional taxonomists at Sydney the researchers compiled a field guide describing over 900 species, many of them new records for Australia or new to science. The field guide developed to become a published book that later won a design award. Recently, to Keith’s surprise and amusement, his contribution to the advances in the taxonomic knowledge of the fauna of this region, was recognised by a new species of ray being named in his honour – Rhinobatos sainsburyi.

In parallel with the exploration, taxonomy and survey cruises of northern Australia, he led several other interconnected streams of research, ranging from the theoretical to the highly practical.

This work led to CSIRO conducting a major multi-disciplinary study on the North West Shelf in 1982-83 aimed at providing scientific understanding about the ecosystem and its dynamics, and in particular to further develop the hypotheses about what caused the historical change in the species composition of the fish community. 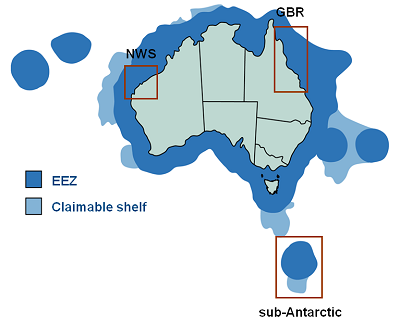 The ocean as a dangerous laboratory

In the North West Shelf study two issues were of interest: the impact of trawls on the seabed habitat; and the escape of fish and habitat-forming epibenthic organisms through different parts of the trawl net which affected the scientific interpretation of the trawl catch information. The best approach to examine both was to dive on the operating trawl and have a look. As Keith recalls:

Our 5-person team of divers did a lot of training for this in shallow water while we developed a practical way to dive down onto an operating trawl, move about on the moving trawl to get into good observing positions, and attach and detach ourselves there to make various observations. When we put all this in practice, in 25 m water depth and 4 kn trawl speeds on the North West Shelf, it was some of the most interesting and exciting diving I have ever done. Unfortunately we had to stop this observational work after a few days when it became clear that our diving gear was not coping well with the continual strain of being towed at trawling speed. The regulator of one colleague broke while he was attached to the trawl, requiring an emergency detachment and ascent. We had a safe assent from the situation but at that point I called a halt to the diving. Fortunately we had already gathered the necessary insights and information. 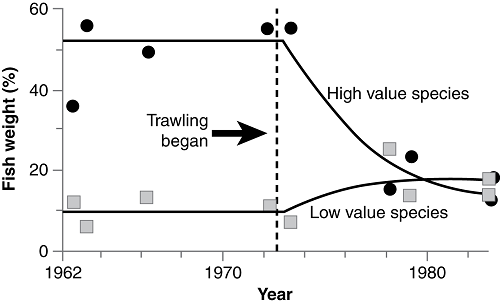 The North West Shelf experiment and its results have had widespread impact. In Australia, expansion of trawling into much of the rest of the northern fisheries was limited and phased out, to be replaced by line and trap methods with less seabed impact. And while the trawl/non-trawl zones on the North West Shelf have changed to some extent over the years, the area is still managed using such zonation. There are extensive untrawled areas where seabed habitats are recovering, and the fishing for snappers and emperors has been sustainable.

Internationally, the impact by trawls on seabed habitat was recognised as a serious and widespread fishery management issue, and this is still being actively pursued today. Photographs of the North West Shelf trawled and untrawled habitats are still being used on various websites and publications as a part of this effort. 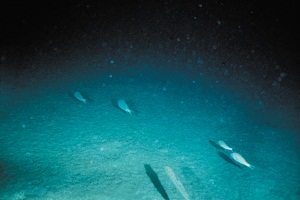 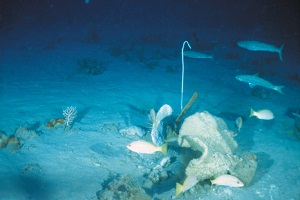 During the late 1980s, Keith Sainsbury was appointed to the Crown of Thorns Starfish Research Evaluation Committee of the Great Barrier Reef Marine Park Authority, which was responsible for funding research into the outbreaks of this coral-eating starfish on the Australian Great Barrier Reef in north-eastern Australia.

In collaboration with Carl Walters, Keith developed a large-scale management experiment to examine this complex of concerns. To apply the management strategy evaluation methodology, they built a comprehensive oceanographic and ecological computer simulation model of the Great Barrier Reef and used this model to develop and test a large-scale management experiment that could determine what effects fishing was having on key species and aspects of the reef and the inter-reef ecosystem. This work continued for over a decade as a major activity within the Reef Cooperative Research Centre.

Other studies engaged in were research into pelagic fisheries and ecosystems with the main focus on southern bluefin tuna because this species is both highly valuable and severely overfished. It included the development and deployment of a computerised tag that could be put on a fish and that could record its location, depth and a variety of other measures. In the years since the computerised fish tag was first developed for southern bluefin tuna, the technology has rapidly spread in application to many different studies and species. Several businesses are now producing the tags commercially. 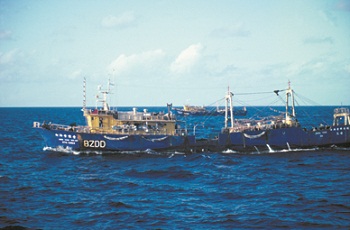 Intensive trawling on a tropical fish community of over 500 species. [Source: CSIRO]

In 1997, Sainsbury suggested there was a need to further develop the scientific basis for understanding and managing the combined impacts of different human uses of marine ecosystems – integrated multiple-use management. The scientific methods to allow integrated analysis and objective advice in these situations were very poorly developed at that time. So CSIRO established a major research program to address multiple-use management issues in the Australian Exclusive Economic Zone (EEZ) and Sainsbury was appointed to lead it. This included:

It provides the basis for integrated management of all federally managed uses of regional marine ecosystems.

In 2000 the General Assembly of the UN initiated an Informal Process on Oceans Affairs aimed at identifying issues that were not well covered or dealt with under existing international agreements and instruments. Keith Sainsbury was a scientific advisor to the Australian delegation in the first three years of this process.

In 2000 the Government of Western Australia identified the need for better science support for planning and development of the North West Shelf regional ecosystem and the various human uses of it. A 4-year collaborative study, led by Keith Sainsbury, was established between CSIRO and the Government of Western Australia to consolidate the information and develop the scientific tools to support integrated multiple-use management of the North West Shelf marine ecosystem.

In 2003 Keith Sainsbury was awarded the Japan prize for his outstanding contributions to food production based on sustainable ecosystems, a concept that he and his colleagues have championed in both theoretical and practical ways for over two decades. The Japan Prize includes a 427 gram gold medal and a cash award of 50 million yen and is awarded to honour the achievements of people throughout the world, who have contributed to the progress of science and technology and the advancement of world peace and prosperity.

At the time the award was announced, Dr Geoff Garrett, CEO of CSIRO said:

It’s fantastic to see our scientists recognised internationally for their outsanding contributions to world science. Dr Sainsbury’s prize is not only a tribute to him and his research, but to the value placed upon such work in Australia.

The presentation of the Japan Prize to Keith Sainsbury on 22 April 2000. The Emperor and Empress are seated behind. [Source: CSIRO]