He obtained his BSc in 1962, his BSc (Hons) in 1963, both from the University of Adelaide, South Australia and his PhD from the Australian National University, ACT, in 1967. His PhD research was carried out at CSIRO’s Parkes radio telescope under the supervision of Dr John Bolton the first Director of the Parke’s Radio Observatory.

Professor Ekers has held positions in several countries. After gaining his PhD from the Australian National University in 1967, he was a Post Doctoral Fellow at the California Institute of Technology from 1967 to 1970; a Visiting Astronomer at the the Institute of Theoretical Astronomy in Cambridge UK (1970-71); a Research Astronomer (1971-76) and full Professor (1976-80) at the Kapteyn Laboratory in Groningen, The Netherlands; and Assistant Director at the National Radio Astronomy Observatory, New Mexico, USA (1980-88).

He was the first Director of the Very Large Array, the major national radio telescope in the USA, from 1980 until 1988, when he returned to Australia and CSIRO to become the Foundation Director of the Australia Telescope National Facility. He continued in this role until receiving a Federation Fellowship in 2003.

His international career has been distinguished by numerous contributions to radio astronomy and radio astronomical techniques. Professor Ekers’ research interests include extragalactic astronomy, galactic nuclei (the centres of galaxies), and the techniques of radio astronomy. A hallmark of his career has been wide-ranging, innovative experiments involving the Sun, Moon, planets, stars, galaxies, quasars and the cosmic microwave background. He made the first measurements of the gravitational deflection of radio waves (demonstrating the predictions of Einstein’s general theory of relativity) and discovered the hot gas that spirals around the nucleus of our Galaxy ‘ the first sign of what is now thought to be a black hole millions of times the mass of the Sun. Professor Ekers is currently planning an experiment to detect high-energy cosmic neutrinos from the radio waves they create when they hit the Moon.

As President of the International Astronomical Union (IAU) Ron was responsible for the new definition of a planet and the subsequent reclassification of Pluto as a dwarf planet.

He has been heavily involved in all aspects of the International proposal to build a Square Kilometer Array (SKA) a future radio telescope which may be located in Western Australia.

Since 2003, Ron’s main research area (as a Federation Fellow) has involved the understanding of the evolution of the very early universe. His specialty is to devise experiments which exploit modern technology in unusual ways. This has resulted in his involvement in two major efforts, both leading teams which make heavy use of CSIRO resources:

For his contributions to astronomy he has received many honours and awards including:

Board and other memberships 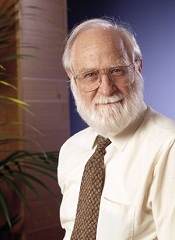