From monitoring soil moisture to measuring oyster heartbeats, a new CSIRO report has revealed Aussie farmers can help to tackle the global food shortage and significantly increase their productivity by taking advantage of new smart farming technologies enabled by next generation broadband networks.

Australian farmers can help to tackle the global food shortage and significantly increase their productivity by taking advantage of new smart farming technologies enabled by next generation broadband networks.

The Smart Farming: leveraging the impact of broadband and the digital economy report compiles research from a number of Australian first agricultural projects which indicate that by connecting farms to broadband-enabled sensor networks, farmers will be able to take more control of their operations by analysing the wealth of new information made available in easily accessible web tools.

“With food demand predicted to increase 50 per cent in the next 20 years[1], the main challenge facing the agricultural sector is not so much growing 70 per cent more food in 40 years, but making 70 per cent more food available on the plate[2]. To tackle this challenge and help farmers make better decisions, we’re trialling new broadband-enabled technologies such as cattle tags to track livestock as well as a range of sensor networks, which measure water salinity, soil moisture and even the heartbeat of oysters,” said Colin Griffith, Director of The Australian Centre for Broadband Innovation (ACBI).

“Initial studies indicate that these tools can help increase farming productivity in crop and pasture yields by targeting the use of water and fertilisers as well as in livestock production through better rotation of animals and pastures. For example, we have seen cotton growers using the soil moisture sensors almost doubling their yields per megalitre of water when they vary irrigation rates according to the localised needs of the soil and plants, rather than taking the one-size-fits-all approach for a whole field,” he said.

“Not only will technology-driven productivity improvements help feed a growing population, but the innovations will also help improve farmers’ bottom line and led to more profitable farm businesses. It doesn’t matter whether we’re talking about a cattle grazier from the Northern Territory or an oyster farmer in Tasmania, the benefits of emerging technologies provide opportunities for the entire farming sector,” she said.

The Smart Farming: leveraging the impact of broadband and the digital economy report will be officially launched to industry and government stakeholders during the Digital Rural Futures Conference on 26 June 2013.

For more information on the report or CSIRO’s Smart Farming projects visit The future of farming. 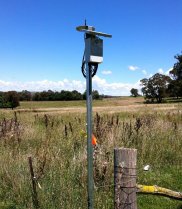 Farmers take a byte out of big data – Infographic.

We’re looking at how sensor-based technology, so devices that can tell you what’s happening to the soil, how moist it is, how the pasture’s growing, where the livestock are. That information can be sent to the farmer and they can access that through mobile devices to help make daily operations to the farm more efficient.