The new Marine National Facility research vessel Investigator has returned to Hobart after successfully completing its cold water trials, which took the vessel to 65°S 146°E, which is about 2500 km south of Hobart.

The Executive Director of the project to build and test the vessel, Toni Moate said the voyage to the ice-edge tested out key capabilities of the ship, to ensure the vessel can operate in low water temperatures.

The ship has been designed to operate in water temperatures of -2ºC to +32ºC, from the Antarctic ice edge to the tropics.

“On this cold water commissioning voyage we tested everything from the winches to the dynamic positioning system, to make sure they were operational in very cold conditions,” Ms Moate said.

The voyage left Hobart in late January and returned this week. Work that occurred on board included:

One of the Marine National Facility’s Operations Officers, Max McGuire, was on board for the voyage.

“It’s the most southerly voyage any Marine National Facility vessel has ever travelled, so everyone was really excited to reach the 65 degree south line, which is around 90 nautical miles from the Antarctic continent,” Mr McGuire said.

On board were scientists from the Queensland University of Technology, Melbourne University, CSIRO and the University of Wollongong, who were testing atmospheric research capabilities and equipment.

Under direction of an independent Steering Committee, the Marine National Facility is owned and operated by CSIRO on behalf of the nation.

The voyage is a collaboration between the Antarctic Climate and Ecosystems Cooperative Research Centre, the Integrated Marine Observing System, the Australian Bureau of Meteorology and the University of Tasmania’s Institute for Marine and Antarctic Studies, and will be led by CSIRO’s Professor Tom Trull. 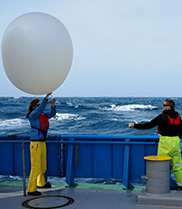