Lan Lam was born in South Vietnam. After graduating from high school, he went to Japan in 1972 as an overseas student.

He obtained his Bachelor of Engineering (1977) and Master of Engineering (1979) degrees at Yokohama National University, and his Doctor of Engineering degree (1982) at Tokyo Institute of Technology, Japan. He subsequently worked at Toshin Industrial Co, Ltd, an electroplating company for switches and connectors, as a Chief of Research and Development Laboratory until August 1987. He was responsible for research and development of plating machines, plating solution, gold recovery, pollution treatment, quality control and staff training.

Dr Lam joined CSIRO in 1988 and by 2009 was a Senior Principal Research Scientist in the Energy Storage Theme of the CSIRO Division of Energy Technology. Since 1988, he has been the research leader of many projects (some simultaneously) that have been well sponsored by either domestic or international companies or research organisations.

His research has been concerned with the advancement of lead-acid batteries and has involved the following:

Dr Lam’s research has resulted in a sustained record of major contributions to both the lead and the battery industries that have resulted in the commercialisation of new products and processes. Notable examples are as follows:

For over twenty years, Dr Lam has been a key scientific adviser to eight Asian countries (China, Indonesia, Japan, Korea, Malaysia, The Philippines, Taiwan, and Thailand). Through his knowledge and teaching/linguistic skills (fluent in five Asian languages), he has enabled CSIRO to forge strong links with the Asian Battery Industry.

Since joining CSIRO, he has published 30 papers, 7 patents and 83 industrial reports, has been a keynote speaker at several international conferences and workshops and has served on the expert panels of both the Asian and the European Battery Conferences.

For his outstanding contributions to his field he has received the following awards: 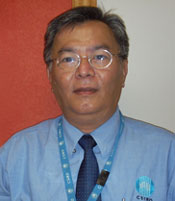