Douglas Geoffrey Lampard was born in Sydney on 4 May 1927. He attended Chatswood and Gordon Primary Schools and he was selected to attend Artarmon Opportunity School in its second intake of pupils. From there he attended North Sydney Boys’ High School, a selective and high-achieving school, from 1940 to 1944. At high school, Doug showed exceptional ability in physics and chemistry, especially in practical work.

He was a nonconformist and concentrated on those activities of school life that took his interest. The Headmaster at the time (Robert Harvey) was a strict disciplinarian and all school days were prefaced by assembly, at the end of which the students marched off to classes to the stirring strains of ‘Colonel Bogey’ or a similar marching tune. Doug was responsible for the sound amplification system and one of his hobbies was tinkering with this system to improve the quality of the sound. On his final day of school before sitting for the Leaving Certificate examinations, Doug substituted his own music and played ‘When the saints go marching in’. This caused a minor riot and brought on the wrath of the headmaster.

In 1947, after the first two years of his engineering studies at the University of Sydney, he spent a year at the CSIR Electrotechnology Division of the National Standards Laboratory as a Technical Assistant, working on microwave measurement techniques. (He had previously worked in this Division as a summer student while enrolled in Engineering.) The exposure he had to research during this period convinced him that his scientific interests were in mathematics and physics, and on returning to the University of Sydney in 1948 he transferred to the Faculty of Science. He graduated with first-class honours in physics in May 1951.

After graduation in February 1951, he returned to the National Standards Laboratory as a Research Officer in Dr David Hollway’s group to work on K-band microwave spectroscopy. This work was written up for an MSc degree with the University of Sydney in a thesis entitled ‘The development of a microwave spectroscope and some problems connected with its sensitivity’, and the degree was awarded in May 1952.

In June 1952, Doug was awarded a CSIRO overseas studentship for two years, to attend the University of Cambridge. He studied in the Electrical Engineering Department under the supervision of Professor EB Moullin, his PhD thesis being entitled ‘Some theoretical and experimental investigations of random electrical fluctuations’. Random electrical fluctuations (or electrical noise) were of central interest to the research staff in the National Standards Laboratory, as they often limited the accuracy of electrical measurements. He was awarded the PhD degree by the University of Cambridge in November 1954.

His two years in Cambridge were remarkably productive and busy ones. It was very unusual (and still is) for anyone to complete a PhD in two years. His research led to several seminal publications on electrical noise and stochastic process. He served as a member of the Department of Scientific and Industrial Research (DSIR) Committee on Atmospheric Noise at the request of the Chairman, JA Ratcliffe of the Cavendish Laboratory. He also taught mathematics at Cambridge Technical College in the evenings, to help finance his studies.

He was invited to spend three months (October 1954 – January 1955) as a visiting lecturer in the Electrical Engineering Department at Columbia University, New York, where he taught a postgraduate course in ‘Stochastic Processes and Noise Theory’. He was offered a position in this department, which he declined because of his commitments to CSIRO. He returned to Australia and to the National Standards Laboratory in March 1955 where he began his outstanding studies on electrical resistance and the measurement standard for the absolute ohm. On being reappointed as a Research Officer, his supervisor (Dr Fred Lehany) noted that: Lampard has made excellent use of his studentship and has established himself widely as a successful research worker in the general field of information theory and the statistical treatment of signals in the presence of noise

At CSIRO he also worked with Dr Ian Harvey on building a ‘probability distribution analyser’. This device was to be used for investigations on random electrical noise. Nowadays electronic measurements of the probability density of amplitudes or of time intervals are commonplace, but at that time it was completely novel. Its key component was an electrostatic memory constructed on the screen of a normal cathode-ray tube so as to provide 64 channels, each of 15-bit capacity. Doug teamed up with Peter Bishop and Bill Levick in the Physiology Department at the University of Sydney to use this machine for the measurement of the probability density of the time intervals between successive nerve impulses in the firing pattern of retinal ganglion cells. At the time, it was believed that sensory information was encoded in the fine temporal structure of neuronal discharge. This first measurement of such temporal detail, reported in Nature in 1961, caused much excitement and stimulated many overseas laboratories to attempt similar measurements.

In August 1960, Doug was appointed to a newly created Chair of Electrical Engineering at the University of New South Wales, specifically in the field of communications engineering. It was to be a short appointment as he resigned in August 1961. He believed that he was not given the freedom and independence appropriate for a professorial appointment to develop teaching and research in his area of responsibility. When the issue could not be resolved to his satisfaction with senior university officers, he returned to the Division of Electrotechnology in CSIRO, from which he had been on long-term leave, as a Principal Research Officer.

His retirement was marked by a gathering of most of his former research students, many of whom travelled from overseas. All gave seminars on their research work. The common thread throughout two days of talks was the outstanding research training and example that Doug had provided his students at a formative stage of their careers, and how grateful they all were for his guidance. Subsequently a group composed mostly of the PhD and MEngSc graduates of the department banded together to fund the establishment of the Douglas Lampard Electrical Engineering Research Prize and Medal. This is now awarded annually to the department’s top PhD candidate for the year.

In 1995, the department commissioned Jane Majkut to paint Doug’s portrait in oils from photographs. The portrait hangs at the entrance to the building where Doug had spent the longest period of his professional career and where the comings and goings of the staff and students of the active and vibrant department he had established in 1962 can still be observed. 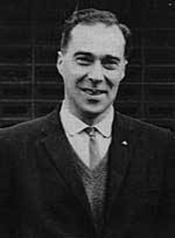