Landguard® is a world first for the rapid treatment of pesticide residues. It is an enzyme-based product that can rapidly degrade pesticide residues in soil and water, creating by-products of significantly reduced toxicity and greater biodegradability than the parent pesticide. Landguard® has reduced organophosphate levels in cotton irrigation wastewater by 90% within 10 minutes and in used sheep dip by 99% within 30 minutes.

The product was developed jointly by CSIRO Entomology and Orica Watercare. CSIRO researchers searched for naturally occurring soil bacteria that feed on chemicals and reduce them to non-toxic compounds, extracted enzymes that attack the chemicals and used advanced molecular biology techniques to enhance their effectiveness. Orica conducted the field trials and developed the enzyme to a commercial scale.

In 2006 Landguard® won a DuPont Innovation Award in the category of Food, Agricultural Production and Marketing. This was followed in 2007 by an Agribusiness Awards for Excellence Technology and Innovation Award. 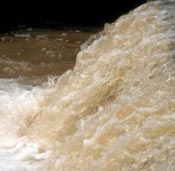