John Cameron Macfarlane was born on 3 January 1936 at the home of his parents Alexander and Margaret in the village of Balmaha on the east shores of Loch Lomond in the Parish of Buchanan, Scotland. His father was at that time the electrician at Buchanan Castle running one of the first water-powered electricity generators in Scotland. Mains power electricity did not reach Balmaha until 1950, so Alexander had also installed a petrol-driven 50-volt generator and battery bank to provide lighting in the Macfarlane household. Thus John absorbed the basics of electricity and a feeling for the electrical units of measurement from an early age. Alexander’s main occupation however was as proprietor and chief skipper in the family-run Balmaha boatyard and ferry business on Loch Lomond, and from this background John acquired his life-long passion for boats and boating. John attended the local Buchanan Primary School from 1941, and  progressed in 1948 to Balfron High School,  the regional Stirlingshire secondary college, where he completed the matriculation requirements in English, Maths, Science, Dynamics  and French to gain a bursary and admission to Glasgow University in 1954. His personal recollections of growing up in rural Scotland during the War years have been published as follows: ‘Buchanan Remembered’, Jennifer Taggart (ed.), pp. 124-135, Buchanan Community Council 2007  ISBN 978-0-9555691-0-4

John Macfarlane graduated from Glasgow University in 1958 with a 2.1 degree in Natural Philosophy (Physics). From 1958-60 he worked as a physicist with the UK Atomic Energy Authority, who at that time operated the first nuclear power station in Scotland at Chapelcross, Dumfriesshire. He received training in the industrial and biological implications of nuclear physics at Harwell and at Windscale, later re-named Sellafield. In 1960 John returned to a research environment to undertake a PhD, having accepted a Ministry of Aviation grant to work on thin dielectric films, under the supervision of Dr Charles Weaver. Although this work was carried out at the Royal College of Science and Technology, Glasgow, the PhD was awarded at that time from the University of Glasgow, in 1964. He then accepted a 3-year term appointment at CSIRO’s National Standards Laboratory and sailed to Australia with his wife Christine and baby daughter Linda on the SS Canberra, arriving in Sydney on 19 December 1964.

Appointed initially to work under Dr Len Hibbard on a hydrogen maser frequency standard, Macfarlane  was subsequently assigned together with Ian Harvey and Robert Frenkel  to join the Josephson Volt project when it was initiated in 1969. This move marked his entry into the field of superconductivity and to his involvement in the fundamental standards area. As he recalled:

In retrospect, I have no recollection of any committee meetings, policy decisions or work-time allocations taking place. Ian Harvey and I, neither of us having any previous relevant experience, simply walked  upstairs  to Guy White’s office in the Division of Physics, and  explained the  breakthrough  in fundamental metrology that was foreshadowed by Josephson’s theoretical paper and the Pennsylvania work.  Within a few days, with help initially from John Birch who gave us a beginner’s crash course in practical cryogenics, we had a working cryostat and enough liquid helium to get started.

When the so-called high temperature superconductor materials were discovered in 1986, Macfarlane embarked with Ian Harvey on a fast-track project to prepare and demonstrate in-house superconducting samples of these materials at liquid nitrogen temperatures. This was achieved in a remarkably short time. As John recalled:

We quickly realized that it would be essential to have in-house access to the new and strange rare-earth oxide materials that were just being reported, particularly by Paul Chu and others at the University of Houston. As soon as the relevant formula of yttrium barium copper oxide (YBa2Cu3O7) was published in Physical Review Letters, I took the reprint round to Bob Driver, one of the few ‘chemists’ then working at NML.  By good fortune, Bob had done some of his PhD work on oxides closely related to this compound. He seemed instinctively to know the process that would be required, including the critical firing and annealing in an oxygen atmosphere. Within a few weeks, we were testing samples of this black ceramic, and when we achieved superconductivity at a temperature of 90K, a front-page article appeared in the Sydney Morning Herald  such was the public interest at that time.

In 1987 Macfarlane was appointed Project Leader of the ‘High-Temperature Superconductivity’ effort. The focus of research for the next 5 years was on designing, fabricating and testing practical devices (such as Josephson detectors and SQUIDs), based on these materials and adaptable to reliable field applications. Along the way, internationally recognised milestones in the basic understanding of high-temperature superconductivity were achieved, and were published in over 100 papers. The enthusiasm and support of CSIRO colleagues including   Ian Harvey, Lew Whitbourn, Bob Driver, Steven Filipczuk, Nick Savvides, Graeme Sloggett, Harold Welch, Steve Collocott, Ron Roberts, Chris Andrikidis, Cathy Foley, Corinna Horrigan, John Dunlop, Rex Binks, Wayne Murray, John Bell and David Eagles, was truly outstanding.

In addition collaborations with industrial partners were initiated during that period and continued under the leadership of Graeme Sloggett, Cathy Foley, and Keith Leslie. Notable outcomes included:

LANDTEM® ‘ a highly portable exploration tool (ground-based electromagnetic superconducting SQUID sensor ) which can spot the difference between ore and conductive overburden, even when the ore body is deeply buried.

OCEANMAG® ‘ allows traditional controlled source electromagnetic (CSEM) exploration techniques for marine hydrocarbons to extend into shallow water. CSEM doesn’t work in shallow water where waves, swells and ocean currents (among other things) create electromagnetic noise that interferes with the signal. And the vast majority of Australia’s remaining petroleum resources lie in water less than 500 metres deep. One way to reduce the noise in CSEM data is by incorporating a second data set. This is done using OCEANMAG® which delivers magnetic tensor gradiometry (the rate of change of the strength of the magnetic field), detects the sources of magnetic field noise and predicts what the electric field noise would be. This predicted noise is subtracted from the CSEM signal enhancing the signal to noise ratio and giving explorers greater power to predict where marine hydrocarbon resources are.

Early retirement ‘ first in the UK and then CSIRO

In 1992 John Macfarlane took early retirement from CSIRO and returned to the UK, initially as a Visiting Professor (1992-98) at the University of Strathclyde, and as a Senior Research Fellow (1992-2009) at both Strathclyde and the National Physical Laboratory, Teddington. Collaborations at Strathclyde with Colin Pegrum and Gordon Donaldson, and at NPL with John Gallop and Ling Hao, led to several innovations in the area of superconducting detectors and devices.

He nevertheless maintained contact with CSIRO during those years, and eventually returned in 2009 as an Honorary Research Fellow (Retired). John is still actively collaborating and publishing with CSIRO colleagues on applications relating to the microwave and THz properties of superconductivity.

He was Technical Editor, Institution of Electrical and Electronic Engineers, Applied Superconductivity Transactions for successive 3-month periods (August-October) coinciding with Applied Superconductivity Conferences in  2002, 2004, 2006, 2008, 2010, 2012. He served on various Branch and Federal committee positions with the Australian Institute of Physics. He is an Honorary Book Review Editor, Australian Physics from 2009-present.

Previous post:
Dial “D” for Diagnosis
Coming up next:
Space: the mining frontier 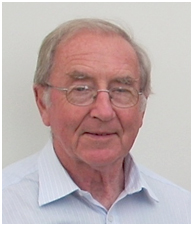