Kenneth Gordon McCracken was born in Brisbane, Queensland on 7 August, 1933. His father, Richard McCracken, was born in Scotland in 1900 and left school at end of primary school to work in the shipyards as a ‘measurer’. Richard emigrated to Queensland in 1923, studied accountancy in night school and rose to become Deputy Commissioner of Taxation, Tasmania. Ken’s mother, Elisabeth Menzies, was born in 1906 of Scottish/German descent. She was a Tutor and married Richard in 1928. Ken was their only child.

In reflecting on his childhood Ken recalled:

My childhood saw many moves, to new states, schools, etc. I became very adaptable. Change never frightened me. This carried through to my science. And I did precisely the same to our children. I was a 1940s ‘nerd’ (called a ‘swot’ then). I experimented in chemistry, radio, aerodynamics, the manufacture of rockets and explosives, etc., taking them to quite advanced levels of amateur interest while still a teenager. Having a congenital heart defect that inhibited conventional sport, I was a very avid ‘bushwalker’ in the then unmapped and formidable ‘south west’ of Tasmania. I ‘knocked over’ most of the most difficult mountain peaks in that area.

He obtained his BSc in 1954; BSc (Hon) in 1955 and his PhD in 1959, all from the University of Tasmania. His PhD thesis was entitled: ‘Variations in the Cosmic Ray Intensity’; his supervisor was AG Fenton.

Ken was part of the second intake of the (compulsory) national service scheme in 1952 and served in the Citizens Military Forces (Corp of Signals) from 1952 to 1957.

Initially he built and operated a 23-litre ionization chamber in Tasmania similar to the Carnegie Type C instruments used by Scott Forbush. In 1955, he became responsible for building and operating the five Australian neutron monitors installed for the International Geophysical Year, 1957-58. As Ken recalled:

In my research work in Tasmania, I was pretty much a ‘one man band’. Starting in 1955, I was solely responsible for developing the ‘neutron monitor’ network in Australia and its possessions for the ‘International Geophysical Year, 1957-58′. I operated my own laboratory on the slopes of Mt Wellington. I built most of a very large amount of state of the art electronics. I established a cosmic ray observatory in New Guinea (1957) and managed – by telex messages – neutron monitors in the Antarctic. I published a remarkable number of papers for a young person in top journals. I had a VERY tolerant PhD supervisor. By the time I went to the USA in 1959 I had a very good ‘hands on’ approach to experimental research, and was well known in the literature. Much of this is expanded in Blast Off – Scientific Adventures at the Dawn of the Space Age, 2008, New Holland.

He was a Postdoc at the Massachusetts Institute of Technology, Boston from 1959-61, a consultant to the Goddard Space Flight Centre (NASA) in 1961 and Assistant Professor, Massachusetts Institute of Technology, 1961-62. During this period he wrote the first computer code to compute asymptotic directions and cut-off rigidities in a (then) sixth order expansion of the geomagnetic field. Of his time at MIT Ken recalled:

My first ‘break through’ was to develop a mathematical model for the motion of relativistic charged particles in a high order simulation of the Earth’s magnetic field. At the time, it was ‘right on the edge’. It worked. Those calculations allowed me to make a crucial observation. At the time we knew NOTHING about the interplanetary space. There were three theoretical models of the interplanetary magnetic field. The occurrence of a large solar flare, and my calculations of many particle orbits, provided unambiguous verification of one, the Parker solar wind model. My mathematical model also solved a long standing problem regarding the distribution of cosmic rays on the surface of the Earth. Both gave me very wide exposure by 1962. My computer program, written in 1959, is still in use today (see Blast Off).

He was a Professor at the University of Texas (1962-72), and was selected as ‘Principal Investigator’ for the Pioneer 6, 7, 8, and 9, and IMP D and E spacecraft, for which he designed and built instruments to measure the cosmic ray anisotropy in interplanetary space. This phase of his career resulted in about 50 papers in high-level journals.

At the University of Texas he built and flew a balloon borne X-ray detector from India in 1964 and discovered the Cas A X-ray source at > 20 KeV, soon after George Clark detected the Cygnus X-ray source at the same energy from Texas. He also held the position of Professor at the University of Adelaide from 1966 to 1969. X-ray detectors were flown on Skylark rockets from Woomera, South Australia in 1967-69, leading to the discovery that X-ray objects are highly time variable.

Changing from cosmic ray detectors on the ground, to building satellites, and to X-ray astronomy were never that difficult. Changing to leading a research laboratory in mineral exploration – about which I knew next to nothing – was a leap of faith.

I decided to establish 6 different research programs – four were extraordinarily successful (SIROTEM, Remote Sensing, ‘on-stream’ mineral analysis, and mathematical modeling). The other two were quite successful – we had no lemons. The key, I believe, was that I saw that semiconductors, mathematics, fast computers, satellites, nuclear physics, etc., were going to make great changes – that all the conventional geologists and geophysicists did not have the background to recognise.

Victor Burgmann was vindicated. My role in establishing and leading the Division led, over time to my election as a Fellow of the Australian Academy of Science and of ATSE; and to my first CSIRO Medal, the Ian Wark Medal, the Haddon King Medal, and being a joint recipient of the Australia Prize. I published a creditable amount of papers on the theory of electromagnetic exploration techniques, while moonlighting from my real job of leading the Division.

Ken was also Chief, CSIRO Division of Applied Geomechanics from 1981 to 1983 and was the inaugural Director, CSIRO Office of Space Science and Applications from 1984 to 1989. Ken described the background to the establishment of COSSA as follows:

Boredom started to set in again about 1983, and I convinced

Goaded to action, the Australian Government established the Australian Space Board, and I was appointed to it. I failed in my ambition to get an Australian space program going – we did achieve some focus on space and some good things were done, but a space program it was not. Brian Embleton, my successor, had more success in establishing the ‘Fedsat’ program.

Since his retirement in 1989 on medical grounds, Ken and his wife Gillian founded Jellore Technologies, a registered business for professional consulting in support of the mining industry, and the museums and art galleries of Australia. A key activity during this time was the development of an airborne system to map the gravitational field of the earth with sufficient accuracy to detect buried mineral deposits. Clients have included BHP Billiton, Rio Tinto, Western Mining, AMIRA, IBM, News Limited, RTZ, MIM, and several Departments of Government.

Working with colleagues in the USA, Switzerland, and South Africa, McCracken has used ice cores from the polar regions to study:

In a set of notes entitled Random Comments on Life and Science Ken wrote:

Basically I regard myself as a scientific pioneer. I relish the completely unknown or the un-conventional view (or worse). I have no fears of ridicule. I like to go back to first principles, and see what the present generation has forgotten, or where new technologies allow the impossible of a previous decade to be done. I like doing this both in ‘pure science’ and in applied science. I have a 7 to nil success ratio. This doesn’t mean I am smart – it may mean that other people are too conservative. My work has created careers for a lot of people who tread the new paths I have opened up.

I have no regrets, although it might have been useful if I had been a better committee person. I like to lead from the front and don’t suffer bureaucratic time wasting (or wasters) gladly.

From the 1950s I have been interested in both pure science and the applications thereof to practical ends. Perhaps it was my mucking around in radio as a teenager. Perhaps my year as a ‘lab boy’ at the Electrolytic Zinc works in Hobart. Perhaps it was Bruno Rossi and MIT. Whatever, I have always welcomed the challenge to be socially relevant through applied science, while also seeking new knowledge, the more controversial and way-out the better. CSIRO was a great place to have both. Either, alone, would be less interesting. And more to the point – each side provides ideas that are useful when transferred to the other. 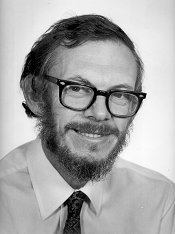