Dr. M. C. (Mervyn Clarence) Franklin was born in New Zealand and graduated with a M.Sc. from Auckland University in 1927.

He obtained his Ph.D. from the University of Cambridge in 1933 and joined CSIRO in
1939. Until 1960 he worked on a wide range of problems concerned with animal nutrition. In 1953, Dr. Franklin became the first McIlrath Fellow in Animal Husbandry. 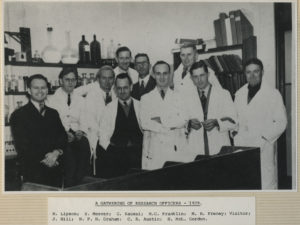 A gathering of research officers, 1939

In 1961 he moved to Brisbane to lead a newly created section of the Division of Animal Physiology to work on problems of beef production in northern Australia.

In February 1962 he was elected Fellow of the Australian Society of Animal Production.

Dr. Franklin’s research in animal nutrition has contributed materially to the sheep and cattle industry of Australia.

For twenty years he lectured in animal nutrition at the University of Sydney and thereby influenced many scientists now working in this field.

He played a leading part in the formation of the Australian Society of Animal Production and was its first Federal President.