In the late 1960s a research program began, in the Engineering Ceramics and Refractories Laboratory of the then Division of Tribophysics, into zirconium dioxide (zirconia) as an engineering ceramic material. The Australian beach sand minerals industry is a major world source of zircon, the mineral precursor of zirconia. This program resulted in two significant achievements, both of which were patented and licensed to Australian companies.

The first and perhaps better known is Partially Stabilised Zirconia (PSZ), a material in which a mechanism never before reported and unique to zirconia confers considerable toughening on what would otherwise be a traditional brittle ceramic. The second development was the SIRO2 Oxygen Sensor, a rugged oxygen sensor capable of in-situ use in a wide range of industrial environments including: combustion measurement and control; heat treatment carbon atmosphere control; high temperature humidity measurement and control; dew point measurement in steel annealing furnaces; food packaging atmosphere measurement; waste incinerators and gas manufacturing plants. The technology is licensed to two Australian companies, Ceramic Oxide Fabricators and Novatech with exports to more than 70 countries.

The principal behind the oxygen sensor

Pure zirconia is useless as an engineering ceramic because of a disruptive phase change at about 1100°C.  It is normally ‘stabilised’ by alloying with calcium oxide (CaO), magnesium oxide (MgO) or rare earth oxides such as yttrium oxide (Y2O3) or scandium oxide (Sc2O3). This alloying, which prevents the phase change occurring, also introduces vacancies in the oxygen-ion sublattice, turning the material from an electrical insulator to a good oxygen ion conductor at elevated temperatures. It is the oxygen ion conductivity which permits the construction of an oxygen sensor, in which the stabilised zirconia is the electrolyte in an oxygen concentration cell, typically above about 700°C. The cell generates a direct current electromotive force (dc emf) from which the oxygen concentration of the environment exposed to the sensor can be calculated.

Unfortunately stabilised zirconia is a typical brittle ceramic, very sensitive to thermal shock. So when in 1970 the Division was approached by Copper Refineries Townsville (one of the Mount Isa Group of companies), with a view to developing a sensor for use in molten copper, it was quickly realised that basing the sensor on a closed-end tube of stabilised zirconia would not work. It was Mr Bob Stringer and the late Dr Ken Johnston who made the key discovery for which they subsequently received patents in the USA, Australia, Great Britain, Canada and Belgium. Their idea was to weld a pellet of stabilised zirconia in the end of a high-alumina ceramic tube, using the self-generated eutectic between zirconia and alumina which forms above about 2000°C at the pellet-tube interface to bond the pellet to the tube. High-alumina ceramics have quite good thermal shock resistance, due to the good thermal conductivity and moderate thermal expansion coefficient of alumina.

Tests showed that these sensors worked very well in molten copper and a licence was granted to Copper Refineries to use what became known as the Isa Oxy Probe system in their operations and to sell the technology to other copper refineries. The control of oxygen content is critical in the casting of copper anodes for electrolytic refining.

While measurement in molten copper is important to the industry, by far the greater potential use for oxygen sensors is measurement in gases. One important application is in combustion systems such as power station boilers, where fuel savings can be made by controlling the excess air at a level just sufficient to ensure complete combustion. Another significant application is protective atmospheres, as in the steel industry, to prevent oxidation during annealing and to control processes such as surface carburisation. Sensing systems available at that time generally involved sampling lines connected to oxygen analysers containing fragile stabilised zirconia sensors. In-situ measurement was preferable and indeed essential for some applications. Thus in 1974 a small team comprising Dr John Bannister, Dr Ken Johnston, Mr Bill Garrett and Mr Geoff Lavery began work to develop a sensor for use in gases, based on the zirconia pellet in alumina tube concept since this combination offered the ruggedness needed for many in-situ applications.

The sensor which was so successful in molten copper was not accurate in gases. Extensive cracking in the zirconia pellet allowed oxygen leakage from one side of the sensor to the other, resulting in low emfs. The cracks also made it difficult to maintain electrical contact to the outside of the pellet.  This cracking was caused by the greater thermal contraction of the pellet compared with the tube on cooling from the welding temperature.

Cracking was largely overcome, and accurate performance achieved in gases, by incorporating alumina in the pellet. This reduced the electrical conductivity as well as the thermal expansion coefficient so some compromise was required. Furthermore, MgO and CaO react preferentially with alumina so they could not be used as stabilisers, but phase equilibrium studies showed that Y2O3 could be used provided the level was just sufficient for full stabilisation.

Before seeking a commercial partner, over 200 sensors were made and subjected to extensive testing in the laboratory and in a variety of industrial situations. Excellent performance and good endurance were achieved. In 1977 an exclusive licence was granted to Ceramic Oxide Fabricators (COF), at that time a small Australian ceramic manufacturer, to make sensors and sell to customers around the world. The company has continued to supply sensors ever since, their sensors being used by probe manufacturers in Japan, USA, Korea, India, England, Poland, Switzerland, China and Australia. The COF SIRO2 C700 sensor has become the industry standard for gas carburising furnaces used to harden steel components in the automotive and aerospace industries. The end users include almost all the car companies in the world, most of the bearing manufacturers and the largest aircraft companies. Other users include ceramic manufacturers and electronic component factories.

The tip of a COF C700 oxygen sensor. The electrolyte pellet is grooved to allow attachment of a wire contact to the platinum electrode coating on the pellet. Each sensor is traceable by its unique serial number. [Source: Ceramic Oxide Fabricators]

The push to develop complete oxygen measurement and control systems

It was always obvious that the manufacture and sale of complete oxygen measurement and control systems would be far more lucrative than the supply of sensors alone. Wishing to maximise the financial return to Australia, the Division encouraged local instrument companies to become customers of COF. Advice was given on the design of analysers and in-situ probes, and software was supplied where requested, for example to convert the sensor reading to the carbon potential in gas carburising furnaces. At one time there were four Australian companies involved, two of which still offer equipment based on the SIRO2 sensor.

In the early 1990s improvements to the sensor were made and patented by the Division. These enabled the zirconia-based pellet to be replaced by a thin disc, welded across the end of the alumina tube, free of cracks and absolutely leak-tight. This technology was licensed to Novatech, one of the four local instrument companies, strictly for use only in their oxygen probes and analysers. COF also makes a disc on tube sensor (their C500 sensor) for use in sampling systems. 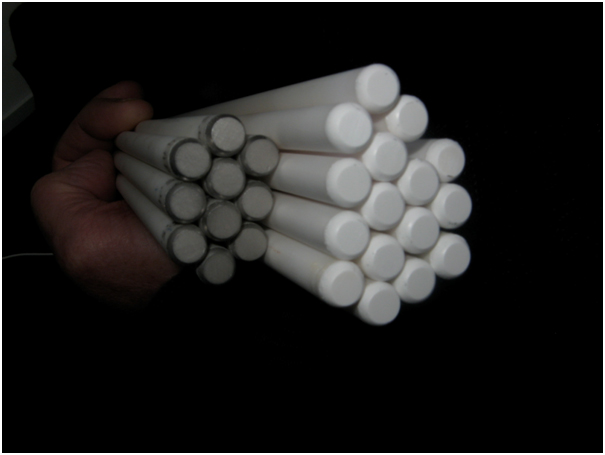 Novatech oxygen sensors with and without external platinum electrode coatings. The C500 sensors made by COF are similar in appearance to these. [Source: John Bannister, CSIRO]

Novatech was established in 1974 by the late Arthur Gould. It’s initial business was the selling and servicing of industrial control instruments. In 1978 they began manufacturing temperature probes (thermocouples and RTDs) and in 1980 began developing oxygen analysers. Their first large industrial contract (in 1985) was to supply probes and analysers to the Swanbank Power Station in Queensland. Since then all Australian coal-fired power stations have installed Novatech equipment based on the SIRO2 sensor.

At the time of preparing this article (2013) Novatech manufactures 1450 sensors, 900 probes and 450 analysers per year. Eighty per cent are exported to over 70 countries in North and South America, Asia, Europe and Africa, with 12% of their production exported to China. Their website (www.novatech.com.au) lists 30 distributors in 25 different countries. Most sales are under the Novatech brand, but some are brand-labelled for Teledyne Analytical Instruments (USA) and GSF, a European oven manufacturer.

Widespread applications of the technology

The Corning upgrade is of interest because they were the initial supplier of the fragile closed-end stabilised zirconia tubes used in analysers prior to the development of the SIRO2 sensor. 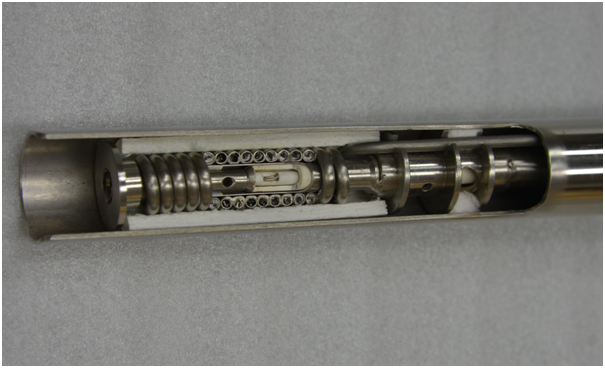 In 1990 Harold Kanost, the owner and founder of COF, acquired one of the Australian probe manufacturers and re-named it Australian Oxytrol Systems (AOS). AOS continues to make oxygen probes for the steel, electronic and ceramic industries. It also develops new probes in collaboration with industry, which assists and encourages the use of the SIRO2 C700 sensor. 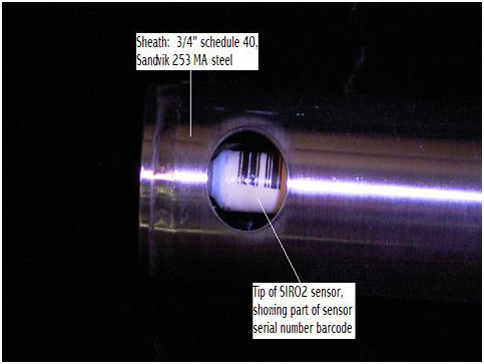 Detail at the tip of an AOS oxygen probe with a COF C700 sensor. [Source: Ceramic Oxide Fabricators]

Walker A, 2013, personal communication. (Alan Walker is from of Ceramic Oxide Fabricators).

Find out more
Previous post:
A telescope is born
Coming up next:
Turning mining wastewater into rainwater