In July 1969, the Parkes Observatory played an important role in history, when it received and broadcast the first Moon landing, Apollo 11.

In July 1969, the Parkes Observatory played an important role in history, when it received and broadcast the first Moon landing, Apollo 11. CSIRO’s Parkes radio telescope received television signals that allowed six hundred million people, one fifth of humanity at the time, to watch the broadcast.

Parkes was one of three tracking stations that received the broadcast. A NASA facility at Honeysuckle Creek transmitted the first eight and a half minutes before NASA decided Parkes’ feed was better quality and began transmitting it instead.

It was not plain sailing. While fully tipped over waiting for the Moon to rise, the Parkes telescope was struck by a series of severe, 110 km per hour gusts of wind, which made the control room shudder. The telescope was slammed back against its zenith axis gears, a dangerous situation that threatened the integrity of the telescope structure. Fortunately the winds abated and Buzz Aldrin activated the TV camera just as the Moon rose into the telescope’s field of view. The Parkes radio telescope began tracking.

Using a less sensitive ‘off-axis’ detector, Parkes was able to receive the TV pictures just as the lunar module’s TV camera was switched on. Less than nine minutes later the Moon had risen into the field of view of the Parkes telescope’s main detector and it began broadcasting to the world.

Following the mission the NASA Administrator, Thomas O. Paine, sent the following message of commendation to the Australian Minister for Education and Science, Mr Malcolm Fraser: ‘I wish to express my sincere appreciation to you and the Commonwealth Scientific and Industrial Research Organisation for making available the Parkes facility during the Apollo 11 mission. Its participation, and spectacular performance, provided the entire world with a chance to experience, with astronauts Armstrong and Aldrin, this historic event’.

Before the mission, John Bolton had agreed to a one-line contract with NASA: ‘The Radiophysics Division would agree to support the Apollo 11 mission’. In meeting his commitment to NASA, both he and the staff of the observatory displayed great nerve and courage in their decisions and ensured that mankind was able to witness the historic event with the greatest possible clarity. For five magnificent days in July 1969, the Parkes Observatory contributed to the success of the greatest voyage of discovery and achievement in the history of science. As it tracked Apollo 11 on its journey to the Moon it was, in a sense, carried along on Eagle’s wings.

To mark the 40th anniversary of the moon landing Neil Armstrong sent the following letter to CSIRO: Neil Armstrong’s Letter ‘ Apollo live from the Moon.

For a detailed account read: On Eagle’s Wings: The Parkes Observatory’s Support of the Apollo 11 Mission. 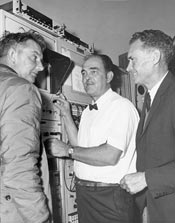