Worldwide, around 640 000 tonnes of fishing gear is lost or discarded each year. These ‘ghostnets’ can continue fishing for decades, entangling huge numbers of marine animals, including threatened and commercially valuable species.

“Our research goes beyond discovering where ghostnet fishing is taking place, to actually estimating its impact on biodiversity, in particular on threatened marine turtles.”

Ghostnets, originating mainly from fisheries in Asia and Australia, are a particular problem in Australia’s Gulf of Carpentaria, where they can reach densities of up to three tonnes/km, among the highest recorded worldwide.

“Our research goes beyond discovering where ghostnet fishing is taking place, to actually estimating its impact on biodiversity, in particular on threatened marine turtles,” Dr Denise Hardesty of CSIRO said.

“Using a model of ocean currents and data collected by Indigenous rangers on the number of ghostnets found during beach cleanups, we simulated the likely paths ghostnets take to get to their landing spots on beaches in the Gulf of Carpentaria,” Dr Hardesty said.

“Combining this with information about the occurrence of turtles in the area, we found that entanglement risk for turtles is concentrated in an area along the eastern margin of the Gulf and in a wide section in the southwest extending up the west coast,” she said.

“Most ghostnets enter the Gulf from the northwest and move clockwise along its shore. This means we can help protect biodiversity in the region by intercepting nets as they enter the Gulf, before they reach the high density turtle areas along south and east coastlines,” she said.

Australia is home to six of the world’s seven threatened species of marine turtle. During a recent cleanup of ghostnets on beaches in the Gulf, 80 per cent of animals recorded in nets were marine turtles, including Olive Ridley, Hawksbill, Green and Flatback turtles.

“Our predictions of the distribution of turtles washing ashore entangled in ghostnets matched the actual frequencies of turtles found in ghostnets during beach surveys, suggesting our model is accurate,” Dr Hardesty said.

Ghostnets are a global problem, capturing seabirds, marine mammals and sea turtles worldwide. Lost or abandoned fishing gear makes up only 20 per cent of marine debris but has a disproportionate effect because it is designed to capture wildlife.

“Our research shows that combining models of marine debris with species occurrence data could identify global hot spots for impact, helping pinpoint where prevention and clean-ups could really make a difference to biodiversity,” Dr Hardesty said.

This research used information on ocean currents generated by the BLUElink Ocean Data Assimilation System to simulate the paths of ghostnets. 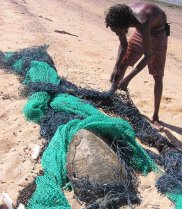 During a beach cleanup, an Indigenous ranger finds a ghostnet with a turtle entangled (Image: GhostNets Australia) 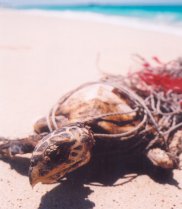 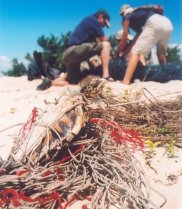 A turtle caught by a ghostnet (foreground) while people attempt to cut a turtle from a second ghostnet (background) (Image: Alistair Dermer)