In a remarkable piece of detective work, a team of 'retired' CSIRO scientists have revealed the group of artists responsible for the iconic scribbles found on smooth-barked Eucalyptus trees in southeastern Australia.

Previously thought to be the work of a single species called the Australian Scribbly Gum Moth, the scientists have uncovered at least eleven new species of moths responsible for the iconic bush graffiti.

‘Although many Australians will be familiar with the distinctive scribbles on gum trees, very little was known until now about the artists that create them,’ said Dr Marianne Horak, a retired moth expert working in an honorary capacity at CSIRO’s Australian National Insect Collection.

“Although many Australians will be familiar with the distinctive scribbles on gum trees, very little was known until now about the artists that create them.”

‘Discovering that there are at least twelve species of moths behind the scribbles was certainly an exciting find. We also found these moths have a link with the ancient supercontinent Gondwana.’

The scientists revealed that the relationship between the scribbly gum moths and their eucalypt hosts is a unique ecological interaction. The moths bore a tunnel through an under layer of the eucalypt bark in their larval stage, looping and moving back and forth along their tracks at different stages of their caterpillar life cycle to create the distinctive scribbles.

‘In an attempt to replace the missing tissue, the trees refill the tunnels with highly nutritious, thin-walled cells,’ said Dr Horak.

The formidable collaboration of scientific heavy-hitters Marianne Horak, Ted Edwards AM and 96 year old Max Day AO teamed up with botanist Celia Barlow – all Honorary Fellows at the CSIRO – in conducting detailed field and laboratory studies to determine the biology and life cycle of the moths. Other collaborators performed DNA analysis and microscopic studies to help confirm their findings and pinpoint these enigmatic moth species’ place within the Insect world.

‘This is a wonderful example of the passion our scientists have for their work, whether retired or not,’ said Dr Joanne Daly, CSIRO Strategic Advisor working with CSIRO’s collections.

‘This research highlights that we still have so much to learn about Australian fauna and flora, even those species we see every day.’

The ‘retired’ research team embarked on the project after a schoolgirl made an interesting discovery while looking at the varying characteristics of the eucalypt scribbles with the help of one of the scientists. She found there were different and unique ‘dialects’ present in different scribbles, indicating that a range of species might be at work.

‘The work of these bush scribblers has an important place in Australian culture and literary tradition, having inspired literary greats such as poet Judith Wright and May Gibbs, who wrote Snugglepot and Cuddlepie,’ said Dr Horak.

The research was published today in the journal Invertebrate Systematics and was supported by the CSIRO and the Queensland University of Technology.

The nutritious tree cells consumed by the scribbly gum caterpillars in the final stage of their ‘scribbling’ allow them to grow rapidly to maturity and eventually turn into a moth. Adult Ogmograptis racemosa seen here. 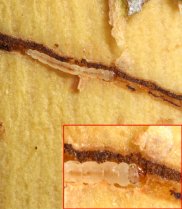 Caught in the act: one of the graffiti artists has been revealed for the first time by CSIRO scientists as Ogmograptis racemosa, here in its mature caterpillar form.