Responding earlier to bushfires and helping address mental health issues are just two of the benefits being seen with the introduction of new social media software from CSIRO.

CSIRO’s social media analysis software is helping organisations make sense of massive volumes of social media traffic, according to a services research specialist speaking at the Big Data Conference in Sydney next week.

“There are 11.5 million Facebook accounts in Australia and over two million Twitter accounts. So analysing social media posts to find relevant information is like looking for a needle in a haystack.

So far, organisations are using the software for three main reasons – reputation management, exploring topics and issues important to the community, and early detection of emergencies or outbreaks. And it’s showing promising signs of increasing efficiency and productivity.

“We believe mental health and suicide prevention is an issue for all Australians. The CSIRO social media engagement tools help us identify key issues on a daily basis and provide social media reports which are easy to understand and quick to produce”, he said.

The Commission plans to use the software to gauge community response to their report cards on Australia’s mental health issues and services. The first is due out later this year.

CSIRO used its own social media analysis tools to find false claims about coal seam gas research that appeared in social media. This allowed CSIRO to address the misinformation quickly.

Tweets about the fire emerged well ahead of any official alerts and within minutes, details such as the fire’s location and direction were appearing on Twitter, allowing  emergency managers to evacuate the hospital safely.

Mr Dormer said the social media analysis tools are being developed with government for government – the Australian Government Department of Human Services being a key partner. Business is also starting to show interest.

“We’ve formed an ‘early adopters group’ of innovators in government to help us develop the social media tools beyond the prototype stage, trial them in real situations, and give us feedback to make them more useful”, he said.

CeBIT’s Big Data Conference is being held in Sydney on 31 October to 1 November. Alan Dormer will be a panellist at the event. 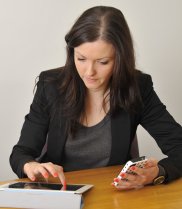 Social media is increasingly a part of the way we communicate, so CSIRO has designed tools to track emergencies and reputations online. 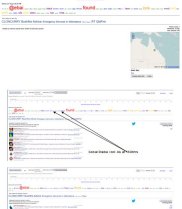