The new app provides open access to the best and most up-to-date information for soil at any location in the country within a matter of seconds.

The app has been developed by the Australian Collaborative Land Evaluation Program (ACLEP) and CSIRO, with funding from the Grains Research and Development Corporation (GRDC), because understanding soils is essential for sustaining healthy, natural environments and productive agricultural landscapes.

“There’s a lot of information about Australian soils stored in these two databases and the beautiful thing about SoilMapp is that it provides a user friendly mechanism for accessing that information in real time, on location,”

CSIRO’s Mike Grundy said soils are one of the most important building blocks of our agricultural and ecological systems and are a precious natural asset.

“They sustain food production, biodiversity, water quality and play a key role in human health. Understanding the characteristics of soil allows us to ensure we make decisions about its management to ensure maximum productivity and maintain or improve its health for today and future generations,” Mr Grundy said.

SoilMapp is the first app developed by CSIRO and it is being launched at the Joint Australian and New Zealand Soil Science Conference in Hobart on Tuesday, in time for World Soil Day on Wednesday. The app taps into soil information from the Australian Soil Resource Information System (ASRIS) and APSoil, the database behind the farming systems model, the Agricultural Production Systems SIMulator (APSIM), which is used worldwide.

Both these databases are stocked with contributions from thousands of individuals and organisations including the Australian Government Department of Agriculture, Fisheries and Forestry (DAFF), state and territory agencies responsible for land resource assessment, Geoscience Australia, and soil research and industry groups. The databases contain information about approximately 85,000 samples from nearly 15,000 locations, some dating back to the 1950s.

“There’s a lot of information about Australian soils stored in these two databases and the beautiful thing about SoilMapp is that it provides a user friendly mechanism for accessing that information in real time, on location,” Mr Grundy said.

“Although that information is already available through the web, it is now of far more use to famers or consultants working out on the land because it can be at your fingertips in the field, and at no cost. Importantly, as our soil agencies improve their data collections, SoilMapp will provide access to later releases,” he said.

Senior Agronomist Steve Richmond from Kerin Landmark Rural said the app will be a welcome addition to his decision making toolkit when speaking with growers.

“By understanding the soil’s characterisation, water holding capacity and amount of organic carbon, we can make calculations about how much nitrogen to use on certain crops. This could lead to improvements in fertiliser use efficiency as well helping prevent soil acidification from the overuse of nitrogen. That provides a productivity benefit as well as environmental and economic benefits,” Mr Richmond said.

“Farmers are the custodians of vast tracts of Australia, and the decisions they make daily will impact on the short and long term future of this country’s ability to feed itself, meet growing global demands and to sustain its natural beauty. The more informed we can be when making these decisions, the greater benefit we can deliver for both productivity and environmental health. It’s a win-win,” he said.

While SoilMapp for iPad currently accesses Australian information, other users may soon be able to get the benefit of this technology, with CSIRO exploring the possibility of working with partners in New Zealand,  Indonesia and the Pacific Island countries to widen the scope of SoilMapp.

SoilMapp for iPad will be available from the App Store soon.

Media are invited to attend the Joint Australian and New Zealand Soil Science Conference on Monday and Tuesday to use SoilMapp and speak with the researchers that developed it.

Find out more about SoilMapp for iPad: soil information at your fingertips. 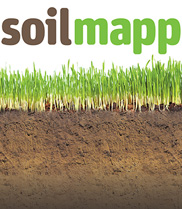 The SoilMapp for iPad will allow farmers and others to access real time information about their soils from in the field.

Previous post:
2°C climate target a hot topic
Coming up next:
The widening gap between present emissions and the two-degree target