A multi-disciplinary CSIRO research team was recognised for their development of a comprehensive set of tools and techniques for improving the performance of gravity thickeners ‘ used by the minerals industry for large-scale separation of fine particles from process liquid.

Gravity thickeners are used widely throughout the minerals industry for solid-liquid separation, but are notoriously erratic and often inefficient in operation. Large volumes of mineral suspensions are treated with speciality chemicals called flocculants, which induce the fine particles to aggregate and thereby settle more readily. The aim is to produce a high proportion of particle-free liquid (called the overflow) and small proportion of a thick, mineral-rich slurry (called the underflow).

The CSIRO team has become the world leader on gravity thickening science, which has been applied to a wide range of issues within thickeners operating across the full spectrum of the minerals industry, delivering benefits of at least A$400 million (NPV) being reported by end-users of the technology.

The success of the Improving Thickener Technology team was acknowledged in 1999 when the team, led by Dr John Farrow, was awarded a CSIRO Medal for Research Achievement.

Most of the world’s minerals pass through solid-liquid separation in a thickener at some point in their processing. Thickeners are used to either:

Despite their importance and widespread use (there are more than 5 000 thickeners globally, with tens of millions of tonnes of solids treated per year in Australia alone) thickeners were very much a ‘black box’ until 1988 when CSIRO launched the P266 ‘Improving Thickener Technology’ series of projects (coordinated by AMIRA International and operated through the Parker CRC for Integrated Hydrometallurgy Solutions).

The original P266 project was initiated in 1988 by scientists from two CSIRO Divisions (Mineral Chemistry and Mineral Process Engineering), who recognised that a multi-disciplinary approach was needed to identify ways of enhancing the performance of gravity thickeners in the minerals industry. Their activities ranged from fundamental surface chemistry to on-site measurements on full-scale units, as well as the development of new instruments and modelling approaches.

The success of the research resulted in expansion of their activities through a series of project extensions, each time using the growing knowledge base to identify new opportunities for improved performance. This at times required additional research skills and these were obtained through collaboration with other research groups from Curtin University of Technology, Murdoch University and the University of Melbourne.

The P266 projects have been strongly supported by the Australian and international minerals industry, with cash funding of over A$20 million since 1988. The latest phase of this research (P266F) commenced in January 2009, with 19 industry sponsors contributing a total of A$4 million over three years.

Key information and technology from each of the projects is provided to all project sponsors in an interactive CD-Rom and through a website restricted to project sponsors. The information includes process models, animations and a searchable knowledge base that contains research data and comprehensive reviews on thickener technology.

A significant benefit to individual project sponsors is the opportunity to engage the research team to work on site-specific problems, with the findings remaining confidential to the company concerned. This has resulted in significant improvements to the performance of more than 150 thickeners involved in the processing of most key mineral commodities, such as alumina, copper, gold, minerals sands, nickel and uranium, as well as in other industries. Performance improvements include higher throughputs, improved operational stability, greater underflow densities, enhanced overflow clarities and reduced flocculant consumption.

CSIRO has developed a number of novel tools for conducting flocculation studies; including the CSIRO floc density analyser for measuring the size, shape, density and settling rate of individual aggregates; the CSIRO shear vessel for operator-independent, continuous assessment of flocculation performance and the CSIRO linear pipe reactor for determining flocculation kinetics.

CSIRO researchers have been at the forefront of enhancing and adapting commercial computational fluid dynamics (CFD) software for application to the multi-phase flow behaviour occurring within gravity thickeners. This has required considerable code development and new numerical approaches. A key element has been to incorporate the flocculation kinetics and aggregate dewatering behaviour that occurs under different physicochemical conditions.

These mathematical models have been verified using extensive physical experimentation in which measurements obtained by a variety of techniques (e.g., laser, tracer, tomography) are compared to values predicted by the CFD models.

The CFD models developed cover all aspects of thickener performance, describing the flocculation behaviour in feedwells, the way the flocculated solids settle and the fluid-flow patterns generated by rakes within thickener. 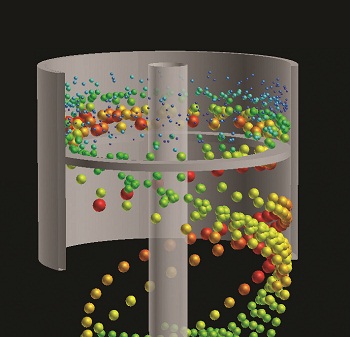