CSIRO conducted several of the largest studies showing that higher protein dietary patterns for weight management have metabolic advantages over high carbohydrate patterns in overweight people. The results clearly showed health benefits and significant weight loss from a diet higher in proteins and low in fats and the ‘Total Wellbeing Diet’ was born. After many requests for further information it was decided to publish the Total Wellbeing Diet. In 2006 Book 2 was published, expanding on the information provided in the original book and introducing a simple exercise program. 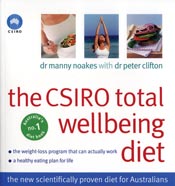