Some of Australia’s most important space, mathematics and digital technologies research will now be driven by a new leader, with today’s announcement that Dr David Williams has been appointed as CSIRO Group Executive, Information Sciences.

Information Sciences is one of five groups in CSIRO, and brings together critical research in astronomical and space sciences, digital productivity and services, information and communication technologies and mathematical and statistical sciences.  The group has about 1200 staff and a budget of more than A$120 million. Dr Williams will be a member of the CSIRO Executive Team and will be based in Sydney.

“It’s a great privilege to have been offered the position, and I look forward to the challenge of leading CSIRO’s Information Sciences Group”

“We are excited to have attracted to CSIRO and Australia a leader with Dr Williams’ extensive scientific and industry experience which will prove vital to building our success in the increasingly significant information and space science domains,” Dr Clark said.

As Chief Executive of the United Kingdom Space Agency and Chairman of the European Space Agency, Dr Williams has led space strategy  within the UK and internationally, including bilateral and cooperation agreements with India, China, Russia and the US.

“The UK Space Agency funds UK involvement in civil space programs, from the science of the Universe to broadcast satellite developments. Dr Williams’ role has included the introduction of a strategy setting out the long term role for UK space research, the relocation of the agency out of London, and the establishment of complementary European Space Agency and national facilities at Harwell, England,” Dr Clark said.

“Dr Williams has also been involved in setting up bilateral arrangements with a number of countries and has extensive experience in international negotiations.”

“It’s a great privilege to have been offered the position, and I look forward to the challenge of leading CSIRO’s Information Sciences Group,” Dr Williams said.

“There are tremendous opportunities to work with industry, develop new capabilities based on the skills of CSIRO staff, and ensure CSIRO maintains its pre-eminent position as a world-class organisation.

“Two particular opportunities will be to ensure CSIRO and Australia realise the significant benefits arising from Australia’s joint leadership of the Square Kilometre Array (SKA) radio telescope project and to guide the successful establishment of the new National Research Flagship in Digital Productivity and Services.” 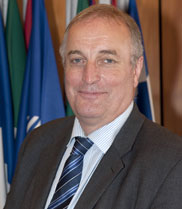