A novel three-dimensional nonwoven nappy-liner with outstanding functional and aesthetic attributes was invented and developed by a CSIRO team led by Dr Niall Finn. It is a key component in the Huggies brand of baby nappies sold in Australia since 2013.

The novel fabric technology, dubbed 3D UltraAbsorb, is a game-changing development in the field of nonwovens technology and in the global nappy market. The liner is a three-dimensional hydro-entangled composite that provides a unique combination of functional as well as aesthetic benefits not previously available in a baby nappy. In close cooperation between CSIRO, the Australian company Textor Technologies and their client, Kimberly Clark Australia, the new product and process were taken from initial concept in 2010 to the Australian commercial launch three years later in 2013.

The production process at Textor was then further scaled up to meet global demand for launches in the USA in July 2014, Russia in January 2015, and other regions to follow shortly afterwards.

The research was recognized with the Sir Ian McLennan Achievement for Industry Award in 2014.

A published market report on ‘Baby Diaper Market – Global Scenario, Trends, Industry Analysis, Size, Share and Forecast, 2011 ‘ 2017’” by Transparency Market Research, shows that the global market for baby diapers is expected to rise by 46.6% from 2011 and reach a market size worth $US 52.2 billion in 2017.

The baby diaper market is estimated at $US 35.6 billion in 2011, and is expected to grow at a compound annual growth rate of 6.6% from 2011 to 2017. The full report can be found at http://www.transparencymarketresearch.com/baby-diapers-market.html.

The global baby diapers market is driven by rising birth rate and increased hygiene awareness across developing economies. Factors such as rising disposable income and changing consumer preferences, along with other demographic patterns too has further accelerated the growth of the baby diapers market in developing markets such as Brazil, Russia, India and China, the Middle East and Africa. The rise of $US 16.6 billion from that in 2011 is largely attributed to fast growth exhibited by Asia Pacific and Latin America. The Asia Pacific baby diaper market is growing the fastest among all regions, and is projected to grow at a compound annual growth rate of 8.4% from 2011 to 2017. In Australia, baby nappies are a consumer category worth about half a billion dollars a year.

The project with Textor Technologies, Victoria began when CSIRO physicist, Dr Niall Finn, became CSIRO’s first ‘Researcher In Business’ in 2010. The RIB scheme was an AusIndustry initiative which aimed to enable closer ties between industry and research-providers by subsidizing the placement of a researcher within a company for a defined period. 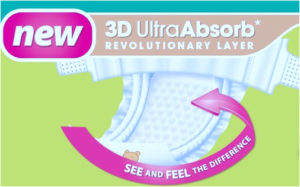 The novel 3D nappy liner is a game-changing development in the field of nonwovens technology and in the global nappy market. It is a three-dimensional hydro-entangled composite that provides a unique combination of functional as well as aesthetic benefits not previously available in a baby nappy.

The new product meets several needs simultaneously. The three dimensional structure was initially conceived to keep the baby’s skin dry by providing separation between the skin and the super-absorbent core while simultaneously distributing the fluid rapidly and uniformly through the diaper. A gradient in hydrophilicity keeps the surface dry and allows liquid to be drawn towards the core. Breast-fed newborns have particularly runny bowel movements and the structure is designed to reduce their spread within the nappy, making the baby more comfortable and the nappy changes easier for their parents.

A material that is able to maintain the soft but resilient 3D structure while meeting stringent mechanical requirements was required in order to allow its endurance through the high speed conversion processes. The two-layer composite provides this combination of properties through a web of fibres that is formed into the soft 3D projections while being simultaneously combined with the flat support layer through the hydroentanglement process.

The support layer gives the strength and stability necessary for the later conversion processes, with the projections providing the in-product functionality and aesthetics. The material must be visually attractive and very soft, while the key functional aspects of the material must also have visual cues for the consumer. 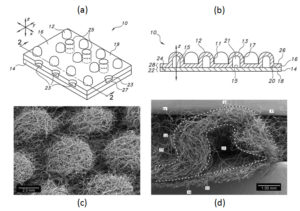 Panel (a): A schematic diagram of one embodiment of the composite nonwoven 3D nappy liner showing the two fabric layers and the projections and apertures. (b), A cross-sectional schematic of the fabric structure showing the hollow projections. The space between and within the projections provides room for the containment of the spread of runny BM, a relatively viscous fluid. It also provides room for spread of low viscosity fluid, urine, which allows it to be rapidly distributed and absorbed into the absorbent core without leakage. The surface chemistry and capillary sizes in the various layers of the nappy are tailored to handle the rapid initial flow then draw fluid down away from the surface and into the superabsorbent core where it is trapped, leaving the baby’s skin dry and comfortable.(c), Photomicrograph of the 3D nappy liner from above. (d), Cross sectional photomicrograph of the composite fabric.  In this embodiment the lower layer is a pre-formed spunbond fabric while the upper layer is a hydroentangled carded web. The carded web is pre-entangled before being combined with the spunbond layer, where the two are simultaneously hydroentangled together and the projections formed. 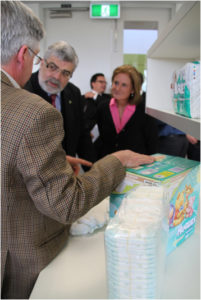 The product concept required a novel manufacturing process. This was developed using CSIRO’s pilot nonwoven facilities in Geelong. At each stage successful experiments on the pilot facility were transferred and verified with trials on the production machine at Textor Technologies. Many hurdles had to be overcome in the progression from laboratory to medium scale production for consumer trials, to full scale commercial production for Australia and subsequent scale-up for the rest of the world. CSIRO contributed significantly to every aspect of this process through an ongoing association with Textor and Kimberly Clark. Textor have more than doubled their production capacity to meet the growing global demand.

The feasibility of scaling-up the process was first proven through modification of the CSIRO pilot line to run at almost four times its original design speed. Experiments conducted at these high speeds informed the choice and design of new equipment and the selection of material inputs and process parameters for high production rates at Textor. The higher speeds allow the manufacture of the 3D liner to be commercially viable. The modifications to the pilot machines were undertaken by CSIRO’s own workshop staff and key specialized parts required for the production machine at Textor were also manufactured in CSIRO’s Geelong workshops by Mr Phillip Smale and continue to be used in commercial production.

The 3D fabric itself must be functional and aesthetically pleasing while being robust enough to be processed at high speeds at both Textor and on nappy manufacturing lines at Kimberly Clark. This gave rise to many complex problems in which process and material parameters combined to modify the material properties in various ways.

The problems were exacerbated by the speed at which Kimberly Clark wanted to commercialize the technology. Dr Finn provided scientific insight into the issues and methods of investigation that often led to their solution. The technology has been covered by six patents. As lead inventor of the technology, Dr Finn contributed much of the text, technical data and diagrams for these patents, working closely with Kimberly Clark’s patent attorney.

The new nappy liner has been commercialized through Textor’s major customer, Kimberly Clark, in Australia, the USA, South America, and Russia, with other regions to follow. In its first consumer trials it received an exceptionally high approval rating and instantly caught the attention of everyone exposed to it. After extensive laboratory and consumer testing the Textor liner was chosen over many other candidates and launched with a fact-based marketing campaign behind it. 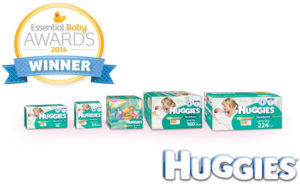 The Huggies nappies with the new liner was recognized in the 2014 Essential Baby Awards.

At the launch in 2014, the then CEO of Kimberly Clark Australia estimated that more than a billion people would be touched by the new nappy liner and that its impact on the market would be long lasting. The new nappy liner can be regularly seen advertised on Australian and international TV and when the global launch is complete Textor will be exporting the majority of its product. Work is underway to develop the next generation of products for future nappies and other applications. In these products a different range of functions and performances will be required as well new aesthetic and styling differences.

The direct benefits to Australia have been significant, with enhanced security of employment for manufacturing workers at Textor and Kimberly Clark Australia (KCA), export income, and increased tax revenues to the government. The development has helped secure the futures of Textor and KCA employees for years to come and in a climate where many other manufacturers are closing their factories in the face of overseas competition.

It has further demonstrated that with suitable innovation Australian companies can compete on a global scale. Textor will be exporting much of its production and their increased profitability through increased scale and higher value products leads to greater tax revenue as it does from Kimberly Clark Australia. Furthermore, an intangible yet invaluable benefit is that it is now known in the world of health and hygiene manufacturing that Australia is a hub of innovation and that its national research body, CSIRO, is a key part of the innovation process. There are also, of course, the benefits to infant’s bottoms and to their parents who have easier nappy changes and happier, healthier babies.

The research has been recognized by the following awards: 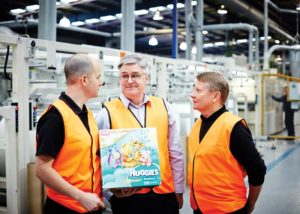