Niall Finn was born in Basildon, England, in 1959, the third of five sons to Joe, a historian, and Eileen a young housewife who later trained to become an English Teacher. The family moved to the rural midlands when he was four years old. There he developed a love of the country and enjoyed farm work during his weekends and school holidays.

He was educated at Guilsborough Comprehensive School to year ten. Tired of school and the school uniform he chose not to do sixth form at Guilsborough but left for Nene College of Further Education where he took A-levels in Physics, Mathematics, and Chemistry, surrounded by overseas and mature students.

University education in the UK

He studied physics at the University of Stirling, attracted by the idyllic scenery of the campus and the Scottish four year honours degree compared to the three year degree in England, obtaining his BSc in Physics in 1982. In his final year he was inspired by a seminar given by Dr Mike Key, (the visiting director of the British Universities’ Central Laser Facility (CLF) housed at The Rutherford Appleton Laboratories near Oxford), to apply to do a doctorate in plasma and laser physics at the University of Essex, a CLF member. While at Essex he worked in inertial confinement nuclear fusion research using the Vulcan Laser at Rutherford Laboratories as well as the university’s facilities. His project, supervised by Dr Tom Hall, involved the development of an ultra-high speed X-ray framing camera capable of 3 billion frames per second which Niall used to record the hydrodynamics of very short-lived laser driven implosions. He received his PhD in Physics from the University of Essex, in 1987.

He was a keen sportsman in his youth, representing his school and both his UK universities at Rugby Union as well as a local club. He retired from rugby on the birth of his second daughter, Finola, whose arrival coincided with his breaking of an ankle during his first match in Australia.

At the University of Sydney

With his wife, Christine, and their first child, Siobhan, Niall travelled to Australia in 1988 where he continued his plasma research under a QEII fellowship. Having decided that inertial confinement fusion was unlikely ever to work and was only of serious interest to nuclear weapons developers, he turned his attention to magnetic confinement fusion, using the small Tortus Tokomak at the University of Sydney. There his role within the Tokomak team was to develop the means to perform Thomson Scattering measurements of the electron temperature throughout the hot plasma as well as assist with Laser Induced Fluorescence measurements of the energy states of neutral hydrogen at the plasma edge. These measurements were coupled with a radiative model of the plasma dynamics developed by collaborators from the University of Kyoto into which he then inserted the laser induced fluorescence components.

Having decided that magnetic confinement fusion was equally unlikely to generate a watt of electricity in his lifetime, Niall Finn joined the then CSIRO Division of Wool Technology in 1991 and devoted his efforts to research for the benefit of wool growers. Working on textile processing research for the wool industry was one of the most interesting and rewarding periods of his career and he particularly enjoyed the mentorship of his group leader, Dr Barry Harrowfield.

Despite the fact that Australia grew 80% of the world’s fine apparel wool, the wool textile manufacturing industry was almost entirely based overseas. As wool constituted only a tiny fraction of the apparel market, the overseas textile machinery industry did little R&D. The research conducted by CSIRO in Australia supported innovation in the wool processing industry and helped to maintain its viability in the absence of wool specific R&D by the global textile industry itself. Niall Finn was involved in various projects including:

He spent two years seconded to the International Wool Secretariat (IWS) in Europe as a ‘Global Project Leader’ to support the commercialisation of one of CSIRO’s innovative spinning technologies, Solospun® 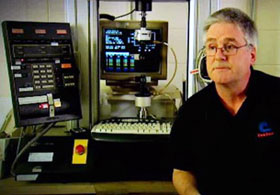 Around the time of his return to Australia in 1999, the division was renamed CSIRO Textile & Fibre Technology and the focus was gradually moved towards technical textiles and away from wool research. This occurred as the Textile R&D spending by the Australian wool research fund reduced. Despite this fall many valuable wool projects continued and those led by Niall were as follows:

This project developed and patented an atmospheric pressure ambient air plasma treatment system for wool sliver which, with a novel polymer system, gave a new shrink-proofing method. The system also allowed softer yarns with lower twist and was applicable to ultra-fine wools which previous shrink-proofing methods could not treat. Despite all the benefits and favourable reviews by international manufacturers the process was not commercialised.

This project involved the development of nonwoven wool blend fabrics using hydro-entanglement for WL Gore & Associates, (the American manufacturing company best known for their development of the waterproof, breathable Gore-Tex fabrics) and a Korean non-woven manufacturer as partner. This project successfully produced flannel-like non-woven fabrics for outerwear and footwear as required by the customer. However a total restructure in WL Gore left the project without a commercial champion. At the same time the wool industry was cutting textile research funding and, as a result, another promising product was shelved.

The Switch to Technical Textiles

From 2000 to 2006 Dr Finn was the division’s Account Manager for Technical Textiles during which period he and others put together a bid with several Australian industry partners and universities for a CRC for Technical Textiles. While ultimately unsuccessful in gaining federal funding, the bid brought together CSIRO and industry partners, leading to numerous projects and consultancies.

In 2001 the Technical Textiles and Nonwovens Association (TTNA) was founded and Dr Finn served as an inaugural board member, representing CSIRO for the following 8 years. A series of divisional mergers and the inception of National Research Flagships occurred in the subsequent years. During this period Niall lead a number of diverse projects.

This project was funded by the Advanced Composites CRC and was conducted in collaboration with the CRC staff and Boeing Aerospace at Fisherman’s Bend. The project studied the influence of low-modulus non-carbon fibres on the occurrence of micro-cracks in thermally cycled carbon fibre reinforced composites to be used in aircraft. Due to difficulties in accessing Boeing’s thermal cycling chambers in the USA, Niall designed and built his own chamber with the assistance of Dr Stuart Lucas who wrote the control software and Ladge Kviz who built the electronics. It was capable of cycling from -55oC to +70oC with a 15 minute period and with almost perfectly triangular temperature profiles. Various routes to reduce micro-cracks were devised and tested but a new polymer fibre became available commercially that suited the purpose perfectly. The thermal expansion coefficients and curing shrinkage of an important aerospace resin were also measured and the stresses generated in post cure thermal shrinkage were measured by Dr Finn using birefringence. At the end of the micro-cracking project, the efforts of the CRC team were redirected to natural-fibre composites.

Sponsored by Gale Pacific who manufacture shade cloth, this project was a collaboration with East Gippsland Water and SuperSpan which explored the overall benefits of covering water supply storages with shadecloth as an alternative to replacement with covered tanks, solid covers or floating covers. Four storages (two raw water and two treated water) were monitored for one year uncovered and one year covered. Two control storages (raw and treated) were monitored for two years uncovered. The storages were instrumented by CSIRO (Niall & Scott Barnes) to record weather conditions on land and on the water, and in the water, the temperature, pH, and algae concentrations were recorded with a suite of sensors attached to a float that was drawn through the depth of the water by a winch on land. Water flows and Chlorine usage was also recorded for the treated water storages. All the weather stations and sensors were logged by a PC that could be accessed remotely. The study showed that covers dramatically reduced the incidence of algal blooms principally by reducing light levels to almost <95% of ambient. Water fowl and wind-borne contaminants were also less likely to enter the storages. Aquatic plants could no longer grow at the bottom of the storages, reducing maintenance costs. Evaporation rates were reduced by approximately 90%. The research showed that the improved water quality and reduced risk of algal blooms and other contamination provided by textile covers can provide enhanced security of water supply at reasonable cost and while still providing good access to the storage for inspection and maintenance.

Under the auspices of the Auto-CRC, this project developed weight-saving composite seat frames for Futuris Automotive Interiors. Initially a CSIRO only feasibility study, it led to a larger collaborative project with Deakin University in subsequent years. In the first phase a front seat with recliner capability was developed that had half the weight of a steel frame. The fibre reinforcements were knitted into net-shape performs using CSIRO’s ‘whole garment’ knitting capability and combined with highly aligned reinforcements where required. The composites were formed in a closed mould with an inflatable bladder and pre-infused or infused in situ by pressure-assisted vacuum transfer and then heat-cured. In the final phase a rear seat for a station wagon was developed that had even higher strength requirements due to the 60:40 folding-split to extend the luggage space. This seat frame was also about 50% of the weight of a conventional steel frame. The composite seats had to meet stringent strength and safety requirements for rear luggage impact and child-seat anchor loadings that were particularly difficult to meet. The resins had to be chosen for thermal stability because the closed car interior can reach very high temperatures in direct sunlight. Aramid fibres were chosen for toughness, strength and benign behavior in an accident. Brittle fibres were considered a higher risk because they might leave sharp edges if the composite fractured in an extreme impact. The technology has been transferred to Futuris for development to commercialization but the recent problems of the Australian automotive industry have hindered that process.

At the Division of Materials Science and Engineering (2007-14) 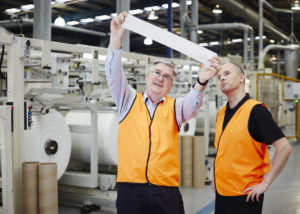 From 2007 to 2010, Dr Finn was Theme Leader of the Advanced Fibrous Materials Theme in the Division of Materials Science & Engineering. Not enjoying a management role that he felt was all responsibility and no power, he chose to return to the bench and this event fortuitously coincided with the commencement of Ausindustry’s Researchers in Business scheme in which he became CSIRO’s first participant. Working within the Australian company Textor Technologies Pty Ltd with a brief to develop novel fabrics for the hygiene industry, Niall threw himself into the new role with renewed enthusiasm.

His work ultimately lead to the development of a novel three-dimensional nonwoven fabric for lining nappies that has been globally commercialised by Textor Technologies Pty Ltd through their major client, Kimberly Clark.

At the CSIRO manufacturing Flagship (2014-)

In 2014 Niall Finn was awarded the Sir Ian McLennan Achievement for Industry Award for this work. At the present time, he continues his work with Textor Technologies Pty Ltd, as a ‘Scientist-in-Residence’, on non-woven processing in the Manufacturing Flagship, while also leading a project for the Energy Flagship on nanofibrous desiccant materials for solar air-conditioning.

For his role in leading the research that led to for the development of a three-dimensional composite non-woven nappy-liner and the successful manufacturing process for Textor Technologies Niall Finn received the following awards:

Previous post:
3D UltraAbsorb Fabric
Coming up next:
A taste of the outback – CSIRO lime varieties 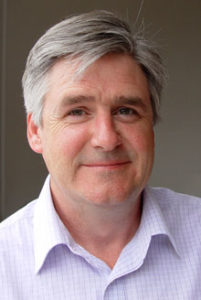