The development of DHA canola, a sustainable source of essential long-chain omega-3 oils.

There is a clear public health benefit in increasing the average intake of essential omega-3 fatty acids such as eicosapentaenoic acid (EPA) and docosahexaenoic acid (DHA) that are typically found in fish oils, from the current average of 150 mg/day to the recommended intake of 500 mg/day. As early as the 1990s CSIRO researchers had the vision to develop plants containing these long-chain omega-3 polyunsaturated fatty acids. They pushed for some time for the establishment of a multi-divisional project that would capitalise on CSIRO’s unique combination of plant, marine and food science capabilities to address this growing need and this significant commercial opportunity.

The establishment of the Food Futures Flagship (FFF) in 2003 provided the development and commercial vehicle to partner with industry in  this endeavour in plant metabolic engineering. The FFF Omega-3 Land Plants team were able to lead the world in this endeavour by reporting in 2005 that they were  able to demonstrate DHA synthesis in seeds. This required the discovery, introduction and coordinated expression of transgenes encoding an entire biosynthetic pathway comprising five discrete enzymatic conversion steps, one of the most complex pathway introductions so far achieved in plant metabolic engineering. A significant intellectual property portfolio has also been established by CSIRO. The Development phase of the project commenced in 2010 and is now working towards a market launch of fully deregulated DHA canola. The importance of this research was recognised by the award of a CSIRO Medal for Research Achievement in 2010.

The Australian oilseed industry generates over $1B in value for the Australian economy and has significant growth potential provided that new products can be developed that meet the specific quality requirements being demanded in the rapidly growing markets for healthy oils. For these growth opportunities to be fully realised, the Australian industry needs to diversify its range of oil compositions to provide an assortment of quality types that meet the nutritional expectations of increasingly health-conscious consumers.

The positive health effects of long-chain omega-3 fatty acids, such as those found in fish oil, are now widely known and have been linked to reduced rates of sudden cardiac death and broader cardiovascular health benefits. The health benefits of long-chain omega-3 oils, which are essential fatty acids, were first reported some three decades ago when scientists observed that Greenland Eskimos had lower amounts of heart disease than other groups despite the fact their traditional diet is actually high in fat.

Associated with this finding was the observation that Eskimo blood took longer to clot. The shorter bleeding times common in Western countries can increase the risk of blood clots which, in turn, may trigger a heart attack. Investigations found that the traditional, seafood rich diet of the Eskimos was responsible both for the thinner blood and the healthier hearts. The key ingredient of this diet was found to be long-chain omega-3.

The human body cannot produce omega-3 oils on its own and does not efficiently convert the short-chain omega-3 oils found in plants to the long-chain versions, especially docosahexaenoic acid (DHA). Because of this, normal growth and development can be impaired, and vulnerability to a number of diseases can increase when the diet does not supply sufficient long-chain omega-3.

Within Australia, most experts agree that we need about 500 mg/day, although the current average Australian daily intake falls well short of this at 150 mg/day. Therefore, there is a clear public health benefit in increasing the average intake of essential omega-3 fatty acids to the recommended intake level. A 25% increase in long-chain omega-3 consumption by the Australian population is targeted and, if met, will result in a significant reduction in cardiovascular events. An independent consultant has estimated that a 10% reduction in the incidence of each of the above stated major diseases due to increase in the numbers of Australians meeting the NHMRC Suggested Daily Target for long-chain omega-3 (610 mg/day males, 430 mg/day females) will result in $1.8 billion in reduced annual health costs.

Seafood is currently the major source of these long-chain omega-3 oils, but the prospect of increasing global harvests to meet growing demand is limited. Aquaculture on its own is unlikely to provide a solution since fish do not synthesise long-chain omega-3 oils and must accumulate them through their diet, much like humans do. This dietary requirement is generally met by feeding aquaculture fish with wild-caught fish. Nearly 90% of the global fish oil supply is currently used to provide omega-3 oils for fish bred in aquaculture. Alternate sources are clearly required and the most promising of these is the engineering of a land-based crop which will be both sustainable and affordable.

The chemical formulae for EPA and DHA

Canola has been selected by CSIRO and the Grains Research and Development Corporation (GRDC) as the production platform for DHA. Canola is the major oilseed crop in Australia and a mainstay rotational crop in our key cereal production systems.

Given the unique challenges in engineering DHA in a land plant, a multidisciplinary research team was created within the CSIRO Food Futures Flagship in order to assemble a DHA pathway in canola. The team included scientists from the divisions of Plant Industry (plant genetics and biotechnology), Marine and Atmospheric Research (unique and endemic microalgal biodiversity, gene cloning, analytical capability, and seafood oils), Food & Nutritional Sciences (food processing and nutrition and substantiation of health claims) and Livestock Industries (animal feedstock and trials).

This was a major scientific advance. Prior to this there were significant doubts about whether a plant seed would be able to accumulate the long-chain, highly unsaturated DHA molecule. This 2005 article describing the transgenic construction of the pathway remains one of the journal’s most read papers between 2000 and 2010. The 2005 paper reported on modest levels of EPA (3.2%) and DHA (0.5%) due to inefficiencies in key steps in the pathway.

Two key genes isolated, namely a highly omega-3 specific acyl-CoA delta-6 desaturase and a delta-5 elongase with greater than 95% efficiency, have been shown to be quite unique in their catalytic efficiencies and when expressed as part of the DHA pathway allow the synthesis of the highest described level of DHA (17%) in a higher plant cell oil. Importantly, this discovery shows that CSIRO has demonstrated that plants are capable of producing an oil which is equivalent to fish oils in terms of long-chain omega-3 composition.

The omega-3 project has a demonstrated ability to design and build complex, multi-gene constructs for stable plant expression and has shown the effectiveness of these designs by transgenically producing DHA in canola seed.

CSIRO’s patents in the area have established a significant intellectual property milestone for the organisation, the significance of which has recently been confirmed with permissible claims in the U.S. for DHA oil from canola, flax and cotton. Continued breakthroughs and subsequent research and development are paving the way for future success in the marketplace.

The project team, in a wider collaboration has achieved a significant technical advance in the development of the rapid Nicotiana benthamiana multi-gene assay which allows the rapid testing of entire pathways constituted from single-gene constructs. This has hugely reduced the time and resource costs of testing such metabolic pathways which previously required the lengthy construction of large, multi-gene constructs followed by stable plant transformation. Typically, this process would take months at best, but has now been reduced to less than a week by transiently transforming a mixture of single-gene vector components in leaf tissue.

The main limitation of this assay was that it could not be used to test seed-specific constructs destined for stable transformation, since these are not naturally active in leaf. The Omega-3 Land Plants team overcame this limitation by extending the assay with the LEC2 transcription factor and are now able to rapidly test complex, seed-specific, constructs in leaf. They have demonstrated the production of DHA in leaf using such constructs at levels that closely resemble those seen in stably-transformed seed. The papers describing these developments have been well received by international colleagues and the technique was awarded the 2010 CPI Chief’s Award for Innovation.

In addition to benefits to the Australian oilseeds and aquaculture industries, the research conducted by the Omega-3 Land Plants project team in developing DHA canola oil may provide broader benefits to the Australian public. Food and nutritional security is becoming an increasingly important topic for governments and the provision of a sustainable source of omega-3 will be a valuable contribution to Australia. The benefits can broadly be described as a triple bottom line: Health benefits, Economic benefits and Environmental benefits.

Impact on the oilseeds industry

The Australian grains and grain-based food industries face significant challenges to remain competitive given that, in export markets, their competitors are highly subsidised (US, Canada, EU) or low cost recent entrants into the international grain trade (India, Kazakhstan, Pakistan). The Omega-3 Land Plants team is generating a clear opportunity for diversifying canola end-uses into higher value segments of the animal feed, aquafeed and human nutrition sectors, mitigating the risk of being overly-reliant on the commodity canola market.

The introduction of a new, high-value, trait to the Australian oilseed industry is a strong contribution to industrial development. It is estimated that the canola crop will add significant value for farmers and the oil will be the raw ingredient of a new value chain that enters markets previously inaccessible to the oilseed industry. There are many uses for DHA canola oil including as an aquaculture feedstock, a feed ingredient for livestock, nutritional supplements including the high-value DHA-enriched sector and as an encapsulated and stabilised food ingredient. Aside from the oil there will be uses for the canola lecithin fraction (ie. feed supplement or food additive) and canola meal. 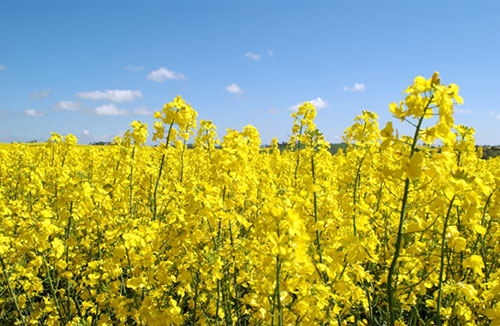 Impact on the aquaculture industry

Sustainability is a core rationale for the research. The pressure on marine fish stocks is increasing globally and this is likely to grow with the increasing global population and the associated expanding demand for long-chain omega-3 oils.

The number of fish on the market grown by aquaculture will shortly equal the number of fish sourced from wild-caught fisheries. The levels of DHA in aquaculture species in Australia are now markedly lower compared to when fish oil was the sole oil ingredient used in the 1990s and early in this decade, although farmed Australian seafood is still an excellent source of long-chain omega-3. The Australian aquaculture industry is growing rapidly and CSIRO’s research will contribute to the provision of a new, sustainable source of long-chain omega-3 oils for incorporation into aquafeed.

The production of plant-based sources of long-chain omega-3 oils will have flow-on effects for other industries. The oils produced will primarily be used by the aquaculture industry. Several calculations have been recently performed to examine global consumer needs for these oils using a daily 500mg requirement as recommended by many health bodies. Allowing for a global population reaching 8 billion by 2025 and assuming fish contain 2-5 g/100g oil, it has been estimated that the current global fish harvest (93 Mt per annum) will fall well short of this requirement. The Australian production of long-chain omega-3 oils from a sustainable, land-based crop will support the rapidly growing aquaculture industry by providing an essential input that will likely only grow in cost.

In addition to taking a commercial approach to producing omega-3 oils in canola for Australia and other developed countries the Omega-3 Land Plants team is examining the feasibility of philanthropically developing an omega-3 crop for African production. Cowpea leaves are a staple diet in West Africa and the group has demonstrated that it is technically possible to engineer DHA in leaf tissue. A scoping study is being conducted to determine whether this would be a suitable application for the technology and a means of increasing the intake of DHA in developing countries.

The work of the Omega-3 Land Plants team, has been recognised by their receipt of the following external and CSIRO awards: