The water we drink comes mostly from dams and rivers. It usually contains several impurities: suspended solid matter, such as dirt, leaves and so on; waterborne diseases such as Escherichia coli, giardia or worse; and dissolved organic carbon (DOC), also known as natural organic matter (NOM) and as ‘Colour’. To make it suitable for drinking, water must be treated so that the suspended matter is removed, and any pathogens killed by disinfection with chlorine or ozone.

During the 1990s a team of Australian scientists from CSIRO and the company Orica, in collaboration with the South Australian Water Corporation, developed a new way to remove organic materials, from the water supply. it was called the MIEX® process, the acronym for magnetic ion exchange. The process makes water cleaner and safer at a lower cost than previous methods and in less time. The MIEX® process uses a specially designed resin. The resin has a magnetised component which allows the particles to act as weak magnets, giving them unique settling and other handling characteristics.

The MIEX® process has been described by US water specialists as potentially the ‘magic bullet’ the world’s water utilities have been searching for and is now a significant part of the Orica Watercare business. By 2011 there were 37 MIEX® systems operating internationally with a further 8 under construction. Of these, only three are operating in Australia: at Mount Pleasant in South Australia, Wanneroo in Western Australia and Airey’s Inlet, Victoria.

The water we drink comes mostly from dams and rivers and contains various impurities such as dirt, leaves, Escherichia coli, giardia, and dissolved organic carbon (DOC). To make it suitable for drinking, water must be treated so that the suspended matter is removed by flocculation using alum or iron salts and any pathogens killed by disinfection with chlorine or ozone.

DOC itself is harmless, but it can interfere in these treatment processes. Specifically, it can increase the amount of alum that is required for flocculation, and it can also react with chlorine or ozone to form small quantities of toxic tri-halo methanes (THMs). In addition, it can promote bacterial re-growth in pipes by acting as a ‘food’. Unfortunately, both surface and bore water in Australia often have high levels of DOC.

Ion exchange is a chemical process in which ions (impurities) in a water solution are adsorbed onto a solid, usually polymer (plastic) bead. Once they are fully loaded, the beads can be recovered and regenerated by using brine to desorb the ions. Ion exchange is used industrially to purify water to high quality. In conventional ion exchange the plastic beads are packed into a large steel or plastic column and impure water forced through under pressure to produce water of higher quality. 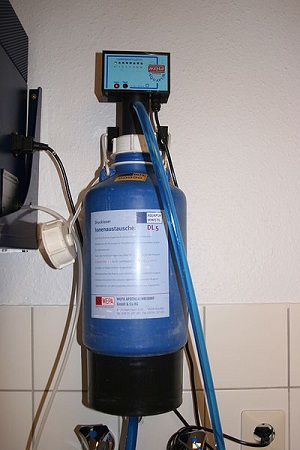 Magnetic ion exchange has a long history. In 1953, Earl C Herkenhoff from American Cyanamid Co patented magnetic ion exchange, in which he incorporated magnetite into a phenolic ion exchange resin, and claimed that the resin could be recovered by magnetic means. In 1965 Don Weiss and others at CSIRO became interested in the application of this concept to desalination, and developed a resin and a process called SIROTHERM®. The resin consisted of crosslinked polyvinyl alcohol beads, sometimes grafted with acrylates, containing magnetic oxides. This work attracted the attention of ICI Australia (now Orica), and they and the CSIRO continued to work on this technology for many years, culminating in two plants, at Osbourne in SA and Mirabooka in WA. Unfortunately, the process did not scale up to industrial scale well, both plants were quickly closed, and research into the area almost ceased.

In the 1980s Prof Don Bursill of South Australia Water demonstrated that if DOC, which is a significant problem for Adelaide, could be removed from raw waters before treatment, there were considerable reductions in both alum and chlorine usage. He realised that this was not possible using conventional ion exchange due to a ‘Catch-22′ situation: the water had to be treated before it could be put through ion-exchange columns, but it needed to have the DOC removed before it was treated. He then had the insight that a resin like the ICI/CSIRO SIROTHERM® might be able to do the job because it did not require the use of packed columns.

While there were several routes to a possible resin for DOC removal, Ballard realised that most were not commercially viable due to toxicity or cost of raw materials. Instead, he focused on creating a resin that had adequate performance at reasonable cost. This led to the choice of glycidyl methacrylate (GMA) as the backbone of the resin, and maghemite (Î³-Fe2O3) as the magnetic oxide. While GMA is not stable to strong acids and bases, it does have the advantage that many different functional groups could be attached through the reactive epoxy ring.

After about a year’s effort, a viable resin had been developed, and it performed well in DOC removal tests at SA Water’s Australian Water Quality Centre. The resin was then patented, and in later years several variants and processes using it were also patented. 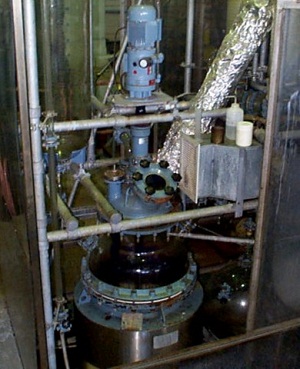 It was one thing to make 60 g of resin in a 200 ml reactor in the lab, and quite another to make enough to supply a water treatment plant – even a small one of several megalitres per day. The resin and the process of making it had to be scaled up – and this led to some very interesting times! As Mat Ballard recalled:

The first steps up to 1.2 litre and then 2.0 litre were successful, but were as far as we could go in the lab. The next step was the process bay, CSIRO’s chemical pilot plant. The first two batches, at 15 and 20 litre were fairly successful, though the resin particle size was too small. The next step up was 200 litre: the first two batches were quite poor, with small particle size, and poor magnetic oxide incorporation.

The problem was that CSIRO did not have adequate equipment for mixing the magnetic oxide into the resin pre-mix. CSIRO then went to a local manufacturer – Yorkshire – who made the pre-mix in their larger scale lab equipment. These were used in the next two batches, which were completely successful. We had successfully scaled up the resin synthesis by a factor of almost 1 000 by September 1995 – or so we thought.

Orica then contracted with SA Water to install the MIEX® process into a new water treatment plant to be built at Mount Pleasant in the Adelaide Hills. Surprisingly, they asked CSIRO if they could make the required resin – about 20 batches – on the 200 litre scale! CSIRO agreed, and after considerable work to meet production, OHS and personnel requirements the first production batch (D5) was made in February 1997.

D5 was a disaster: it set into one solid lump in the 200 litre reactor. Test batches in the lab with the raw materials showed that the problem lay with the iron oxide pre-mix. Further investigations showed that the wrong iron oxide had been used. A second batch of pre-mix was made under close supervision, and used in production batches D6 and D7 – which also set solid, though not as badly.

The problems are overcome

Frantic lab investigations slowly tracked down the problem: the pre-mix was temperature sensitive. When made at small scale, it remained cool, but when made at commercial scale, it became quite hot. CSIRO also discovered that smaller batches were less prone to setting solid. Armed with that information, the batches from D8 onwards were more successful, and an ongoing lab program helped to continuously improve resin quality. A further hiccup was encountered when supply of one of the critical raw materials in the pre-mix ceased, and a substitute had to be found rapidly.

Once production was under control, Orica extended the production run to 40 batches, then extended it again when they won a contract to install MIEX® at the Wanneroo water treatment plant in WA. In the end, almost 200 batches of MIEX® resin were made at CSIRO.

Orica then constructed its own $10 million, 300 tonnes per year MIEX® resin manufacturing plant in Melbourne to supply resin to both Australia and the world.

MIEX® is used as a pre-treatment at the start of a conventional water treatment plant. It is a continuous ion exchange process performed in tanks, which is maintained in a steady state by the withdrawal and regeneration of loaded resin, and the return of this resin to the process. It can be used in a stirred tank, followed by settling, or (more recently) as a fluidised bed. Orica Watercare refers to these as Dual Stage and Hi Rate. 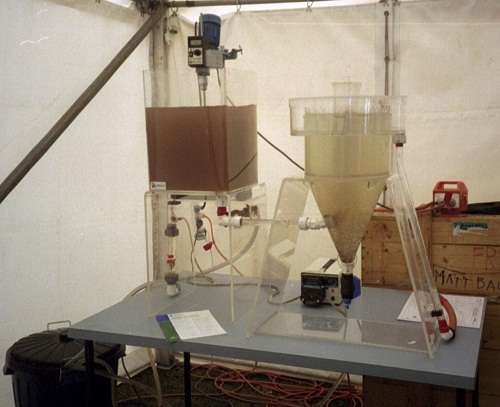 CSIRO’s Benchtop demonstration MIEX® plant, with contactor/mixing tank on the left, and settler tank on the right: resin collects on the bottom of the settler and is pumped to regeneration and re-use in the contactor. [Source: CSIRO]

The first MIEX® pilot plant was a 200 kilolitre unit at Hope Valley. Initially resin losses were very high due to unsatisfactory settler design, but once the settler was re-designed with advice from Dr Nic Booker resin losses dropped to acceptable levels. A detailed description of the process can be found by opening the PDF in the Sources below.

The first MIEX® water treatment plant was at Mount Pleasant in South Australia, and it was commissioned in 2001. This was a small plant designed to test MIEX® and other new technologies. Unfortunately for the people of Adelaide, MIEX® has not been installed at any other water treatment plants in that city. A much larger plant opened at Wanneroo in Western Australia in 2002 and a small plant at Airey’s Inlet, Victoria in 1997. [external links]

The MIEX section of the Mt Pleasant plant. [Source: CSIRO]

MIEX® was far more successful in the USA and Europe. There are now 37 MIEX® systems operating internationally and a further 8 under construction, at present treating close to 500 megalitres per day of capacity, and an estimated additional 300 megalitres was installed during 2009. MIEX® is now a significant part of the Orica Watercare business.

The team involved in the development of the MIEX® process were as follows:

The development of the MIEX® process has been recognised by the following awards: