The sirex wasp (Sirex noctilio) kills healthy pine trees by introducing a wood-rotting fungus and toxic mucous into the tree. This fungus introduced by the female wasp spreads throughout the tree and provides food for the burrowing sirex larvae. In the 1940s the wasp wiped out one third of New Zealand’s pine trees, before almost destroying the Tasmanian pine industry in the 1950s. When the wasp was found in Victoria in 1960 a major effort was initiated to control it, by felling and burning infected trees. When this didn’t work the hunt began for a biocontrol agent.

Robin Bedding has pioneered and led the world in the use of nematodes (unsegmented worms) for the traditional and novel biological control of a range of insect pests. He found the perfect biocontrol weapon for sirex in Deladenus siricidicola, a nematode with a fungal feeding stage as well as a parasitic stage. The sirex control program has been incredibly successful. In the absence of this control agent, up to 80 per cent of trees can be killed. Were the wasp to spread throughout Australia, the resulting devastation has been estimated to be $1-4 billion per 30-year plantation rotation. In recognition of his work, Deladenus siricidicola was renamed Beddingia siricidicola and a new family, Beddingidae established.

Robin Bedding has been responsible for the establishment of a new commercial industry for Australia. He has received many honours and awards for his work including election as a Fellow of the Australian Academy of Science in 1997 and as a Fellow of the Society of Nematologists in 1998.

The sirex woodwasp was accidentally introduced into Australia in the 1950s. With no natural predators, it vigorously attacked softwood plantations, notably radiata pines. This introduced pine from North America accounts for the bulk of softwood production in Australia, with more than one million hectares under plantation. The devastating effect of sirex was illustrated in South Australia in 1987 where an outbreak of sirex in 50 000 hectares of plantations resulted in the death of almost five million trees, valued at millions of dollars. It has been estimated that the uncontrolled spread of sirex over a 30-year plantation rotation period has the potential for a $1-4 billion loss of timber.

Following the discovery of the sirex woodwasp in Melbourne in 1960, CSIRO established a laboratory and quarantine facilities at the Imperial College field station in Silwood Park, Ascot, UK. The sirex unit was for work on the parasitoids and parasites of sirex and related species from all over the world.

In 1965, Robin Bedding who had obtained his BSc and PhD degrees from Imperial College, London, was appointed to study nematode parasites. Despite early misgivings at changing from insect to nematode parasites, he soon found that the latter were equally fascinating. In his landmark paper published in Nature in 1967 he showed that not only were the nematodes able to sterilise sirex females (great potential for biological control) but they had a quite separate free-living life cycle in sirex infested trees where they fed on the fungus introduced into the tree by sirex females. As Robin recalled:

The initial finding that aseptic juvenile nematodes from the testes of sirex, placed on cultures of the sirex’s symbiotic fungus, 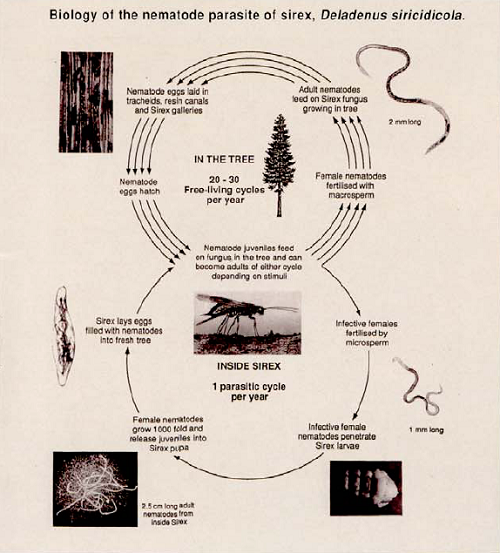 The extraordinary double life cycle of Beddingia siricidicola. Finding the fungal feeding cycle was crucial in enabling manipulation of this nematode for the successfuol biological control of sirex. [Source: Kuch B, 1994, ‘Cool work with wasps and worms’, Ecos, 80: 19-21]

Interestingly, the parasitic and free-living adult nematodes were so different from each other in appearance that they had previously been placed in different nematode families. As Robin recalled:

When I discussed my findings before publication with nematologists at Imperial College and overseas, most were sure I had made a mistake and got another nematode confused with the sirex one. I sent off to New Zealand for them to send me some of their sirex wasps that were parasitised by nematodes and tried these on fungus and that is when I had the proof. Had I been a fully trained nematologist I probably would not have believed that this life cycle was possible and might have missed it. 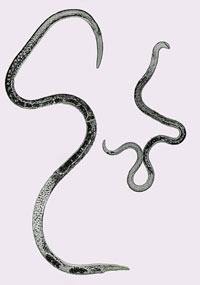 The two forms of adult female of Beddingia siricidicola. Even the spermatozoa used to fertilise them are dimorphic. [Source: CSIRO]

The research effort moves to Australia

By 1969, when it was obvious that these nematodes had potential for the biological control of sirex, Robin Bedding was switched from his original position as a research officer of the Australian High Commission to become a CSIRO research scientist and was invited to migrate to Tasmania. There another sirex unit had been established, to work on sirex biology and the potential of insect parasitioids, next to the first Australian forest to have been attacked by sirex in the early 1950s.

With a promising young scientist, Ray Akhurst, Bedding analysed hundreds of nematode isolates from 7 species (which he described and named) from all over the world. They selected Deladenus siricidicola, from Sopron in Hungary as the best candidate to use in Australia, and developed the technology for mass rearing and liberating it. They then tested D. siricidicola in several Tasmanian forests where it reach levels of 100% parasitism followed by collapse of sirex populations, as well as helping to distribute the nematode in Victoria. In recognition of Robin Bedding’s role in the control of the sirex wasp, Deladenus siricidicola was renamed Beddingia siricidicola and a new family, Beddingidae established.

Over many years as sirex slowly spread (at about 30 k per year) across Victoria without much forest damage, foresters developed an understandable complacency so that nematodes were not properly introduced when sirex reached the hundreds of thousands of hectares of pine in the Green Triangle. During 1987-89 millions of pine trees were killed by sirex with up to 80% tree death in the worst affected areas. While this was devastating for the forest industry, it did act as a giant ‘control plot’ and led to the calculation that, in the absence of control, sirex could cause losses of between $1 billion and $4 billion dollars in each rotation of Australia’s pine forests. Since that time there have been no major outbreaks of sirex.

Beddingia (previously Deladenus) siricidicola,was the first nematode to be used successfully in the control of an insect pest. This nematode can achieve parasitism in sirex of close to 100%. It does so by infecting the gonads of the adult wasp. Although B. siricidicola does not sterilise males, it sterilises females by suppressing egg development, and by entering and disrupting the eggs. The sirex female can still lay these eggs and in doing so spreads the nematodes to new trees. This nematode is used as a classical biological control agent; once introduced into a forest it can more or less be left to look after itself because sirex females transmit it throughout the population. In the South Australian example, once the nematode had been introduced, the sirex population crashed within two years. 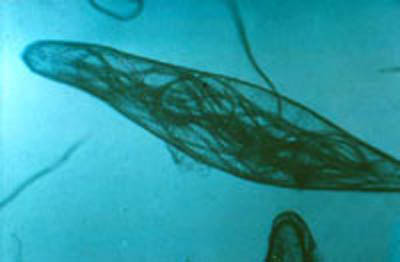 What prompted the development of cryogenics and mass-rearing technology in the fight against insect pests? It came in response to a number of unforseen problems that arose in the use of these natural predators of sirex. The first problem is the infectiveness of the nematodes which are released. Twenty years ago when a plantation was inoculated with Beddingia, a virtual 100% parasitism of sirex was guaranteed. Later, parasitism became as low as 25%. The continual sub-culturing of free-living nematodes on a fungal culture without the development of a parasitic form has created a twist to the story.

Continual sub-culturing of the free-living stage the carefully selected Sopron strain had culminated in a loss of the nematode’s genetic ability to develop into the parasitic form in the field. For this defective strain of B. siricidicola to be effective, there must be very high levels of sirex infestation before parasitism is sufficiently high to result in satisfactory control. This is clearly undesirable because of the economic cost of the high levels of sirex damage to mature trees.

First Robin Bedding and his team had to re-isolate the original strain they used 20 years earlier. This proved to be a daunting task as most of the pine plantations in southeastern Australia had already been inoculated with the defective strain of nematode. After a detailed search of all forests to find individuals from the original strain (198 strain), a breakthrough occurred in the Kamona forest near Scottsdale in Tasmania. Here it was discovered that an inoculation of the 198 strain (the Sopron strain) had occurred only once and the ‘defective’ strain had never been introduced. Even so, only one out of nine sirex infested trees in the forest were found to contain the original strain. Robin’s team used DNA analysis to separate the defective strain from the re-isolated original strain (Kamona strain) and allow tracing its establishment in the field following mass production in his laboratory, to be traced.

This strain, (now called the Kamona strain), was collected from one of the trees and carefully cultured until large numbers were once again established. To protect the genetic integrity of this strain, hundreds of vials of these nematodes have been snap-frozen at temperatures below -190 °C in liquid nitrogen storage containers. Unlike other methods of storage, these nematodes will last well over 10 years with a greater than 75% survival rate after cryogenic storage.

In 1988 Robin moved from Hobart to a custom built laboratory in Canberra, established a new team and continued to develop and patent nematode technology and the use of new nematode species and strains to the stage of commercialisation. To demonstrate their commercial feasibility Robin’s team produced nematodes commercially both for use in Australia and for export overseas. However, identifying a suitable commercial partner proved very difficult. Eventually, in 1999 Ecogrow Australia Pty Ltd was established to commercialise CSIRO research on the control of insect pests with nematodes.

Initially CSIRO allowed Ecogrow Pty Ltd to work from the CSIRO laboratories in Canberra, until the company established their own factory to produce B. siricidicola for the control of the sirex wasp and other nematodes for the control of a range of horticultural and lawn insect pests.

Robin Bedding has received many honours for his work on the use of nematodes to control the sirex wasp and other insect pests. He was elected a Fellow of the Australian Academy of Science in 1997 and a Fellow of the Society of Nematologists in 1998.

He was awarded a: