Robin Bedding was born in 1940 in Chelmsford, UK where his father was working on radar for Marconi. He was sent to board at Sommerhill school in Wales to escape the bombing when only three or four years of age and then lived with his family, firstly in Surrey, and then when he was 13, in Cornwall. Robin obtained his BSc (special) in zoology and applied entomology, at Imperial College, London University in 1961 and then in 1965 his PhD (on the dipterous parasites of woodlice) also at Imperial College, London University, where he won the Marshall Prize for biological research. In 1965 he was appointed a research officer of the Australian High Commission, stationed at the Imperial College field station in Silwood Park, Ascot, UK. He joined CSIRO’s Division of Entomology in Hobart in 1969 and moved to the head office laboratories in Canberra in 1988. Throughout his career he pioneered the use of nematodes for the control of a wide range of insect pests (see Entomopathogenic nematodes and Sirex wasp eradication). His work has been recognised by his election as a Fellow of the Australian Academy of Science in 1997 and his receipt of a Centenary Medal in 2001, the Sir Ian McLennan Achievement for Industry Award in 1997 and a Clunies Ross National Science and Technology Award in 1995.

In 1965, he was appointed as a Research Officer to the sirex unit, a newly established laboratory and quarantine facilities at the Imperial College field station in Silwood Park, Ascot, UK. The sirex unit was for work on the parasitoids and parasites of sirex and related species from all over the world. Here he made his outstanding findings, published in Nature in 1967, that Deladenus nematodes were not only able to sterilise sirex females (great potential for biological control) but that they had a quite separate free-living life cycle in sirex infested trees where they fed on the fungus introduced into the tree by sirex females.

In 1969, Robin was switched from his original position as a research officer of the Australian High Commission to become a CSIRO research scientist and migrated to Tasmania to continue the sirex research. There he and Ray Akhurst selected, from seven species (which he described and named) and hundreds of isolates from all over the world, the best one, Beddingia (then Deladenus) siricidicola, from Sopron in Hungary, to liberate in Australia. They also developed the technology for mass rearing and liberating this nematode. They then tested it in several Tasmanian forests (where it reached levels of 100% parasitism followed by collapse of sirex populations), as well as helping to distribute it in Victoria.

This work has had a major impact on the Australian forestry industry. In controlling the Sirex wasp, it is estimated that $1 to $4 billion will be saved in every 30-year rotation of Australian pine forests. In recognition of his contributions, Deladenus siricidicola was renamed Beddingia siricidicola in his honour and a new family, Beddingidae established.

Keen to follow up on the success of this nematode, Robin, with an excellent team, then began to explore the possibility of using a very different group of nematodes for the control of a wide range of insect pests. When there is adequate moisture present, Steinernema and Heterorhabditis species are able penetrate the natural body openings or directly through membranous areas of a range of insect pests. They then release symbiotic bacteria that kill the insect and convert it into suitable food for the nematodes which then breed up so that hundreds of thousands of juveniles can emerge to seek out and kill other insects. One of Robin’s first contributions to the use of these nematodes was to develop and patent a means of mass producing them so that they could be tested and used in the field. Working aseptically he used the nematode’s symbiotic bacteria to convert various artificial media distributed on crumbed foam (to provide a huge surface area to volume) into suitable food for the nematodes so that even in half litre flasks he was able to get yields of up to 100 million infectives from each and later up to 2 000 million from each inflated sterile bag. This ability to mass produce together with patented work on storing and transporting the nematodes, not only permitted extensive field trials but also the world’s first commercial use of them (on black currant borer and black vine weevil).

During this time, Robin became Chairman of the management committee of the CSIRO regional laboratory, an acting Chief Research Scientist, enjoyed hundreds of hours of spearfishing, was open judo champion of Tasmania for four years and coached the state judo teams.

While still in Hobart, Robin, with Drs Ray Akhurst and John Curran commenced, in 1984, under the auspices of the Australian Centre for International Agriculture (ACIAR), a major project concerned with introducing the nematode technology to China and using nematodes to control important pests there. In collaboration with the Guangdong Entomology Institute in Guangzhou and the Biological Control Institute in Beijing, nematode mass production facilities were established in Guangzhou and Beijing. In addition, major field trials and the commercial use of nematodes were undertaken against two important pests after extensive exchange of personnel between China and Australia. Seventeen million hectares of apples were severely affected by the moth Carposina nipponensis and Robin and his Australian and Chinese team found that applying one species of Steinernema to the soil under the tree, in field and commercial trials killed off most of the overwintering catapillars. This was turning out to be a wonderful solution until growers replanted with smaller trees of different apple strains; Carposina hardly affected these! Of much greater long term benefit was nematode treatment of shade trees lining the streets of major northern Chinese cities such as Beijing and Tianjin. Five per cent of these culturally important trees had been dying every year as a result of the trunks of each being eaten out by hundreds of the wood boring caterpillars, Holcocerus insularis. Well over ten million trees have been inoculated with nematodes and the problem is now minimal and use of toxic chemicals avoided.

During 1988, Robin moved from Hobart to a custom built laboratory in Canberra, established a new team and continued to develop and patent nematode technology and the use of new nematode species and strains to the stage of commercialisation. To demonstrate their commercial feasibility Robin’s team produced nematodes commercially both for use in Australia and for export overseas. However, identifying a suitable commercial partner proved very difficult. Eventually one was found and after CSIRO allowed Ecogrow Pty Ltd to work initially from its laboratories in Canberra, they established their own factory to produce nematodes for sirex and several tonnes of entomopathogenic nematodes each year to control horticultural and lawn pests. Ecogrow won one of the inaugural ACT Research and Development Grant Scheme Awards in September 2001. After the catastrophic outbreaks of sirex in the Green Triangle, Robin and his team had renewed responsibility for sirex nematodes. This was particularly important when it was found that the carefully selected Sopron strain had become the much less infective ‘defective’ strain. Robin’s team used DNA analysis to separate the defective strain from the re-isolated original strain (Kamona strain) and to trace its establishment in the field following mass production in his laboratory.

Robin ceased working for CSIRO Entomology as a Chief Research Scientist in 2002 but has since then been a CSIRO Honorary Fellow continuing to work with insect and predatory nematodes. In 2005, sirex reached the USA and Canada where there are 200 million hectares of pine at risk with the possibility of up to $1 billion a year losses if sirex is not controlled. Robin has been consulting for the USDA and for South African forestry on control of sirex and also for Homegrown in Kenya to establish entomopathogenic nematode technology there.

Robin Bedding has received the following national and international awards for his work: 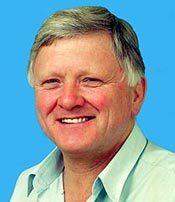