Australia’s cultural institutions risk losing their relevance if they don’t increase their use of digital technologies and services, new research has shown.

Released today by CSIRO, an analysis of Australia’s galleries, libraries, archives and museums (or GLAM industry) has revealed that digital innovation in the sector is inconsistent and isolated. The report provides a roadmap for the industry in order for it to maximise the potential of the digital economy.

With Australia’s rapid uptake of online and mobile platforms, people are now choosing to access and share information in very different ways.

According to Dr Michael Bruenig, Acting Director of CSIRO’s Digital Productivity Flagship, many of Australia’s cultural institutions have not kept pace with this change.

“The report identified that only a few organisations have made fundamental changes to their operations that would allow them to place digital services at their core, rather than as an ‘add-on’ activity,” he said.

The report identified that only a few organisations have made fundamental changes to their operations that would allow them to place digital services at their core, rather than as an ‘add-on’ activity”

The few cultural institutions that are embracing digital technology are reaping the benefits.

“For example, it is now possible to visit the National Museum virtually via a guided robot. This innovation means school students in regional Australia are able explore exhibits and engage with the museum, when they otherwise would not have the opportunity to,” Dr Bruenig said.

The report also showed that Australia is falling behind international best-practice in digitising over 100 million artworks, books and audio-visual items. According to Dr Bruenig, this slow progress means we risk losing public visibility of cultural and heritage material of significance.

The report outlines several recommendations that would allow the GLAM industry to take full advantage of digital technology. These include:

According to Dr Bruenig, by adopting these recommendations and building on some innovative examples in the sector, Australia’s GLAM industry will be in a position to embrace digital, rather than be engulfed by it.

The report, conducted in partnership with the Smart Services CRC, is based on consultation with representatives from state, national and local galleries, libraries, archives and museums, researchers and international experts. An Innovation Study: Challenges and Opportunities for Australia’s Galleries, Libraries, Archives and Museums [PDF 1.24MB]. 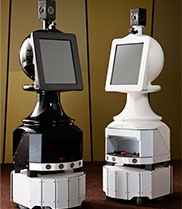 These robots roam the halls of the National Museum of Australia 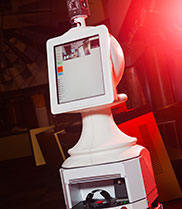 These robots roam the halls of the National Museum of Australia.